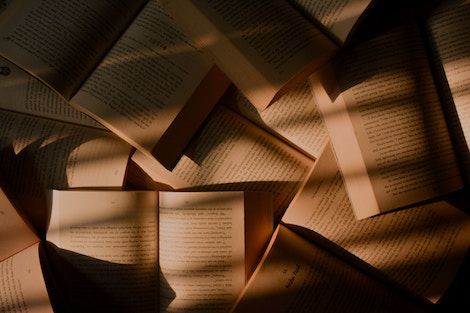 I find that there’s nothing better for a dark winter night than a dark, strange book. Maybe it’s a thriller or a mystery, or maybe a collection of stories, but I love a good creepy book. I’ve collected here some dark books in translation for cold winter nights. All of these books are short, written by women (who better to really scare you?), and absolutely unsettling. 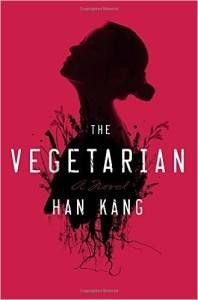 I love Man Booker International Prize–Winner The Vegetarian by Han Kang. It’s a beautiful and provocative story about a woman, Yeong-hye, who begins to have horrible nightmares—of blood and carnage—and in order to clear her mind and rid herself of these dreams she becomes a vegetarian. The story becomes one of control and power as her husband and family try to break her into submission, back into the norms of Korean society. To further emphasize her lack of control, Yeong-hye’s own story is told by others, in three parts, first by her husband, then her brother-in-law, and finally by her sister. It’s a dark, fascinating book that you won’t be able to stop thinking about it. 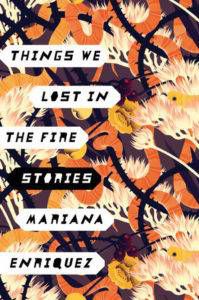 Things We Lost in the Fire: Stories by Mariana Enríquez, translated by Megan McDowell

I was blown away by this collection of dark, macabre short stories set in contemporary Argentina. They are stories of ghosts, disappearances, violence, inequality, and more and I promise that you will be haunted by them. My favorites were stories of obsession like “The Dirty Kid” in which a young professional woman discovers that a local child has been killed and mutilated, and “The Neighbor’s Courtyard,” a story of an ex-social worker who believes her neighbor has a child chained up in the backyard. The collection is reminiscent of Shirley Jackson and I would recommend it to anyone who enjoyed Her Body and Other Parties: Stories by Carmen Maria Machado. 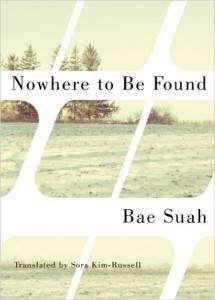 Nowhere to Be Found follows a nameless narrator’s search not for meaning, but for meaninglessness, in contemporary South Korea. Bae Suah’s young narrator describes her empty existence as she travels through life, barely moved by the disintegrated state of her family and her own poverty and loneliness. Translator Sora Kim-Russell describes it as “a road novel turned inside out, a story of a woman’s journey out of and into desire told as only Bae Suah could tell it.” Blurred descriptions of a life full of trivial banalities are thrown against dark, sadomasochistic sex scenes. The abrupt shifts are disorienting and unsettling and Suah breaks boundaries, constantly, between recollection and memory, facts and fiction. 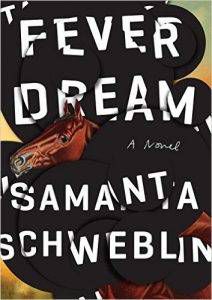 Translated into English for the first time, Fever Dream is an eerie, absorbing novel about the “power and desperation of family.” A young woman is in a rural hospital clinic, delirious and dying. A boy named David, the son of a friend, waits by her bedside as Amanda tries to piece together how she came to be there and where her own daughter is. But there’s something wrong with David, wrong with the place Amanda finds herself, and maybe something wrong with Amanda too. The writing is tight and sparse but absolutely absorbing and you’ll find yourself racing to the end of this small but powerful book.