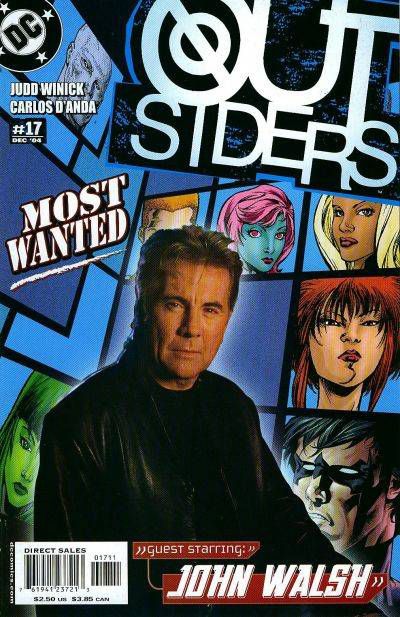 Most of the time, comics crossover with other comics. That’s an almost obvious assumption. And yet, occasionally, the real world directly intrudes on the fictional world in ways both big and small. President Clinton attended Superman’s funeral in 1993. Captain America punched Adolf Hitler in the face in 1941. And the Outsiders met America’s Most Wanted’s John Walsh in 2004.

The Outsiders were a superhero group originally founded by Batman in 1983. Their roster ebbed and flowed over the years, at times being a group Batman directly led, while other times found the group following the orders of lesser-known heroes like Geo-Force. A few times, the Outsiders have broken up and had their lineup changed dramatically when their team was eventually relaunched. During the early 2000s, the Outsiders reformed under the command of Nightwing, the original Robin in the DC Universe. Alongside a group of mostly young heroes, the Outsiders attempted to battle the foes most heroes didn’t touch. These were villains who fell through the cracks. The series was written by Judd Winick and by its 17th issue, Carlos D’Anda was handling both pencils and inks.

Among the Outsiders was a hero named Grace. Her past hadn’t been brought fully to light by this point in the series, but this story changed that. It should be said that this three issue story, called “Most Wanted”, is dark and will probably make some readers uncomfortable. Proceed with caution.

While out on a mission to take down a drug ring, Grace stumbled across a crime even more hideous than drugs. Opening the door to the criminals’ lair exposed a prostitution operation that focused exclusively on children. She found children tied to beds with cameras focused on them. It was an incredibly disturbing image.

Grace took the situation poorly, as one would. After freeing the children and learning about a thriving slave trade going on in the area, the Outsiders discovered that the leader of the group was a man named Tanner. Grace had a past with Tanner, after she revealed she had been part of one of his pedophile prostitution operations in her youth.

After hitting dead end after dead end in their Tanner investigation, Nightwing decided on a different tactic. He decided to crowdsource their hunt. So, the Outsiders turned to America’s Most Wanted.

America’s Most Wanted, hosted by John Walsh, was a real television show which launched in 1988. Walsh’s son, Adam, was kidnapped from a Sears store in 1981 and murdered. Soon thereafter, Walsh became a spokesman for abducted and missing children and the story of Adam became a national news story. Walsh’s media appearances eventually resulted in the launching of America’s Most Wanted, which dramatically reenacted crimes with the goal of tracking down fugitives sought by police. A tip line phone number was given during every episode and viewers were asked to call in if they had any information. Walsh was the face of the show, hosting each episode and making it his personal goal to bring on-the-run suspects back to law enforcement’s hands. Before the show wrapped up in 2012, producers claimed it had captured over 1200 criminals in its 24 year run.

Nightwing thought this was the show, and that John Walsh was the man, who would help them flush out Tanner.

It was an incongruous mix. Here were costumed characters of various types, including one intergalactic alien, one robot, one “metamorphic man”, one daughter of a Golden Age hero, two former sidekicks, and one Amazon turning to a real person with a real horrific murder in his past to help them track down the absolute abomination that is a child prostitution ring. Clearly, the creative team’s hearts were in the right place, but having a guy in a skin-tight outfit and bat-modified domino mask lead the charge against this type of abuse borders on the surreal.

Anyway, America’s Most Wanted aired a story about Tanner and the tips began to pour in to John Walsh. Almost immediately, Walsh became a vigilante. Instead of, say, letting the police in on the hot tip about the person behind this mind-numbingly monstrosity, he called up the Outsiders and gave it to them.

Just in case readers thought that Walsh’s vigilante ways was a one-time thing, he went and did it again in the very next issue. This time, he told the Outsiders about a police convoy that was moving an informant from one facility to another and gave his tacit consent to the Outsiders attacking the convoy so they could get the information first.

Now, in their defense, one of Outsiders’ children was kidnapped by the prostitution ring during the course of this story so their wanting to get more information as soon as possible makes some story sense. This already dark story went a shade deeper when that kidnapping happened.

Eventually, Tanner was tracked down and Grace punched him in the face. Repeatedly. In close up. On panel. For several pages. It was more disturbing than satisfying.

So, by circumventing the law, John Walsh helped Grace and the other Outsiders pummel a man who was already in custody and wasn’t resisting arrest. Had Tanner died from his injuries, Walsh would probably have been arrested for conspiracy, interfering with a police investigation, and perhaps even murder.

Instead, the story ended with Walsh and Grace having a heart-to-heart about the horrors of her past and about her choice to not kill a man.

It was a depressing story, full of long, drawn shadows and dour expressions. John Walsh comes across as a man trying to do good but who is also a vigilante and isn’t above circumventing the law to achieve the goals of America’s Most Wanted. That meant it was sort of a surprise that a real person would allow himself to be written that way, but John Walsh was obviously on board with the idea. The story was discussing the very real and very terrible realities of the world which meant it wasn’t an especially fun or easy read.