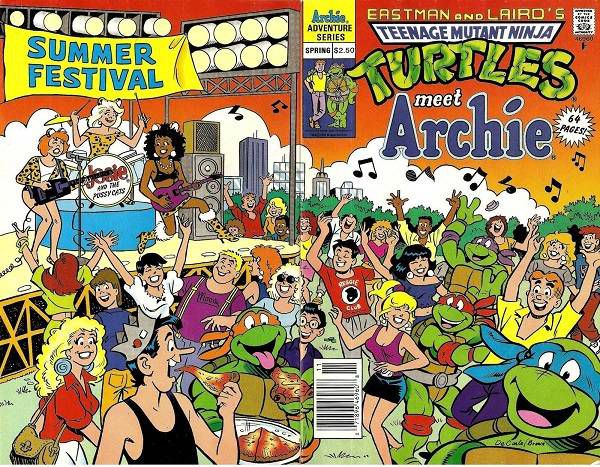 Teenagers, no matter where they live or their specific circumstances, have a lot in common. Their desire to find a group in which they fit in is always paramount. Constantly defining themselves by what they do and the things they enjoy is the most natural thing in the world to them. To open up and talk to close friends in an attempt stave off feelings of isolation and loneliness is only natural. Even fictional teenagers aren’t immune to these laws. Perhaps this is why two such disparate groups of teenagers as the Teenage Mutant Ninja Turtles and Archie and his friends were able to mesh as easily as they did.

By the point this crossover hit newsstands in 1991, the Teenage Mutant Ninja Turtles had gone through several changes. Having first appeared in 1984 in the pages of an independently produced black-and-white comic, the Turtles were originally a take-off of the ninjas found in the work Frank Miller was doing in Daredevil and Ronin. They were a sensation nearly from the start. During their first few years of publication, the Turtles changed slightly, eventually even having their stories switched from black-and-white to the more expensive color. It wasn’t until 1987 that their biggest change happened. It was then that the Teenage Mutant Ninja Turtles cartoon began airing in syndication around the United States. While their look had naturally streamlined since their 1984 debut, suddenly the cartoon changed them even more. Now, they were rounder, each of them wore different colored bandanas, and they had more distinct, if simplistic, personalities. It was this cartoon version of the Ninja Turtles that started being published in the pages of Archie Comics as Teenage Mutant Ninja Turtles Adventures. Their harder edged original versions were still going in the pages of Mirage Comics, which was run by the Turtles’ creators, Kevin Eastman and Peter Laird.

Archie, meanwhile, was still doing the same thing he’d been doing since 1941: Going to high school and simultaneously dating two beautiful girls. Archie’s look had changed during the fifty years between his debut and this crossover, but not drastically. He and his friends were still the fun loving, soda drinking, music making teens they’d been for years.

Teenage Mutant Ninja Turtles Meet Archie began, as so many crossovers do, with one set of characters making the jump across dimensions to land in the world of their co-stars. The Ninja Turtles’ way of doing so was fairly dramatic. They used a pal of theirs named Cudley the Cowlick, a floating cow’s head / cyborg who could cross dimensions and bring anyone with her who fit in her mouth. She made several appearances in the pages of Teenage Mutant Ninja Turtles Adventures but never showed up on the cartoon. Readers unfamiliar with the Archie Comics series may find this plot point hard to suspend disbelief for, but sometimes you need to roll with this stuff in order to get the story moving.

Readers of the Turtles’ Archie stories would have been familiar with more than just Cudley the Cowlick. Several members of the creative team might have also struck a cord. Ryan Brown and Dean Clarrain, the story’s plotters and scripter, were writers on the Turtles’ kid-friendly comic series. Ken Mitchroney, Marlene Becker, and Ryan Brown also had done work on several issues of their ongoing series. While the Turtles art staff handled the Turtles on each page, Stan Goldberg and Rudy Lapick handled the work on the Archie characters. Goldberg and Lapick were old pros, having had drawn Archie for decades before this special was released. Seeing different art styles for each character was something few other crossovers attempted, but gave a sense of legitimacy to each set of characters.

Cudley’s unceremonious dumping of the Turtles into a small clearing was seen by the locals. Parked on a nearby hill were Archie and Betty, who had come to the area to do a little necking. Seeing a floating cow’s head deposit walking, talking turtles sort of killed the mood. When the pair rushed to Pop’s Chock’lit Shoppe to warn their friends about the aliens they’d seen, they met harsh skepticism. Besides, who cared about the idea of aliens when there was a Josie and the Pussycats concert to go to?

Things weren’t going well for the Ninja Turtles either. They’d come to Riverdale to explore a new and different world for exactly twelve hours. To better do that, they immediately broke their desire to only do good by stealing clothes left out on a clothesline. Leonardo claimed they’d return the clothes on their way out of town, but that’s a moment the story never shows us. I’m inclined to believe the Turtles don’t believe in the morality of stealing when it comes to alternate dimensions.

The siren song of a free Josie and the Pussycats concert was too much for any teenager to fight against, including teenage ninja turtles. I’m assuming Josie sang the siren song that is 3 Small Words. I know that’d get my attention. By the time the Turtles showed up at the concert, Veronica was stomping off to home after being annoyed by Reggie and Archie. The Turtles watched as two men claiming they were from the IRS grabbed the richest girl in Riverdale and spirited her away in their waiting car.

Luckily, when the Turtles finally came across Archie, Jughead, and Betty soon afterwards, everyone was able to take a beat and not freak out about seeing four giant talking turtles. It certainly helped that the Turtles were quick to explain they’d seen Veronica getting kidnapped and Donatello spent some time explaining how dimensional travel worked. The idea of crossing dimensions in a floating cow’s head wasn’t brought up, which is really for the best.

Veronica’s kidnapping allowed the Turtles to finally operate in their wheelhouse. Sneaking around in stolen trenchcoats, hanging out at concerts, and talking with teens wasn’t really their thing. But jumping through windows, hitting people with nunchucks, and rescuing pretty ladies in distress? Well, that was right up their alley.

When the group randomly stumbled upon the kidnapper’s hotel room, they quickly returned to their core competency. While Jughead distracted the crooks by pretending to be a pizza delivery boy, the Turtles swung into action and beat down the bad guys. Archie and Betty did their part by cheering them on and claiming total credit. Way to be a team player, Archie.

Now that everyone was friends, the group retired to Pop’s where they all sipped milkshakes. Raphael made time with Veronica, Donatello picked Dilton’s brain, Michelangelo appeared to have a pizza eating contest with Jughead, and Leonardo went on a weird two-on-one date with Archie and Betty. Hot Dog, forever alienated from the group for being a dog, could only watch in sadness.

That’s how the story ended. Cudley wasn’t seen again. The Ninja Turtles never returned their clothes. Moose never got to return in a hilarious costume that he ran back home to get. It was a cute ending though it felt like more could have been done.

Even though the story ended, the comic didn’t. Teenage Mutant Ninja Turtles Meet Archie was an anthology comic. After this first story, three others followed. These were set in the universe of the Teenage Mutant Ninja Turtles Adventures comic series. Archie and the gang were relegated to these 22 pages only. Fans hoping for a full 64-page adventure, which could have been assumed given the title and cover, were disappointed. Still, any Archie and Ninja Turtle crossover is better than none. While it was a shame we never got to see Pop hang out with Splinter, Archie spend time in the Turtles’ sewer hideout, Jughead be kidnapped by Shredder, Reggie becoming Casey Jones’s sidekick, or Betty and Veronica getting career advice from April O’Neil, fans simply had to make due with what they were given.

Who knows? Maybe we’ll even get a sequel one day. Keep your giant, green, mutated fingers crossed. It may just happen.