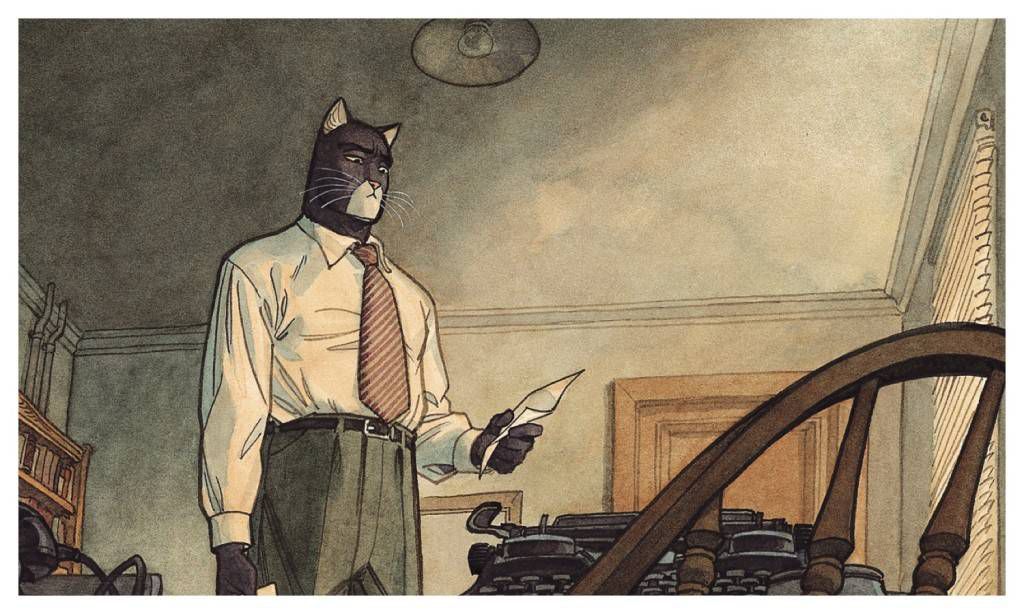 I have a lot of friends who do not read comics regularly, and of course I just buy them comics the first chance I get. I don’t think you need to be “into comics” to read them.  And I send you back to the most excellent post by Eric Margolis on the topic. So here are some of the books I have bought for my friends who are not “into comics” and why.

There are several reasons why Blacksad by Juan Díaz Canales (writer) and Juanjo Guarnido (artist) is a really great first comic, or a good comic for occasional readers. I think it is an effective way for people who usually read prose to see what images can add. The art and coloring are gorgeous. It is just so pretty to look at. Also the aesthetics of the book evokes Humphrey Bogart films.  If your friends include fans of the classic Hollywood stylish crime drama, this book is an ideal fit. But even without going that far, most people have the codes to understand what to expect from a noir/pulp book. It makes Blacksad less intimidating to an occasional reader even if the characters are anthropomorphic animals. Another advantage of Blacksad is the storytelling. It is very linear and straightforward. Most pages follow a simple grid pattern and internal monologue accompanies the reader through the book. Each volume is a story and provides a satisfying ending. The success of this book worldwide is completely deserved.

Comic adaptations of another medium are a

good gateway to comics. Darwyn Cooke’s adaptation of Richard Stark’s Parker novels is one of the best examples of how it’s done.  Given the length of the original novels the graphic novels do lose some plot points and characters, but all the essence of Stark’s amoral cold-blooded killer is there.  This rough and gritty crime fiction has received multiple awards and has been universally saluted.  But beyond being a fantastic comic it is great for casual readers. Very easy to access, each Parker book is an adaptation of a complete novel.  The artwork is impressive. Cooke is a master. Each line feels absolutely necessary and contributes to the distinctive look of the books. And this may be me being overly sentimental, but I love that all of it was done with pens and paper.  Knowing that these pages, colored and lettered, exist out there in the world makes me happy.

More pulp: this limited series by Francesco Francavilla is another of my favorite comic books for occasional/non-comic readers.  The Black Beetle is a masked vigilante looking for answers after an explosion targeting the mobsters operating in the fictional Colt City. First, the No Way out collection is a pretty book. And offering something that will look good on a shelf is definitely an advantage if you are buying a book for a person who likes books, without necessarily reading comics. It does help fight the cliché that a comic is just monthly and disposable. Additional plus: it is a self-contained crime mystery, the kind that will make you go back through the pages to pick up the clues you missed once you have reached the end. The art is fantastic. Francavilla’s limited but bold color palette based on his signature orange makes the book stand out. The writing has a lot of personality as well and almost reads like old school radio dramas.  It is a really nice way to ease into some caped super hero action. It is a great bridge between superhero and indie comics for anybody you want to encourage to cross from one side to the other.

Because the list cannot decently only include crime dramas, let’s turn to space. Universal War One is not for everyone, but it is a fantastic book of hardcore science fiction: a civil war, time dilation, time travel –done right– and a mysterious and impenetrable “wall” that cuts off access to the solar system beyond the planet Saturn. If your friends love Asimov’s novels or enjoy the exploration of the final frontier, this book is for them.  The clean and detailed art style is very easy on the eye. The storytelling is very cinematic. It is therefore no surprise that a movie has been rumored.  Trigger warning/spoiler: Volume four does show NYC being destroyed.  It was drawn before 9/11, but some of the images are reminiscent of those attacks. Bajram who writes, pencils and inks, colors and letters UW1 expressed his regrets about that unfortunate coincidence in the forewords of that volume.