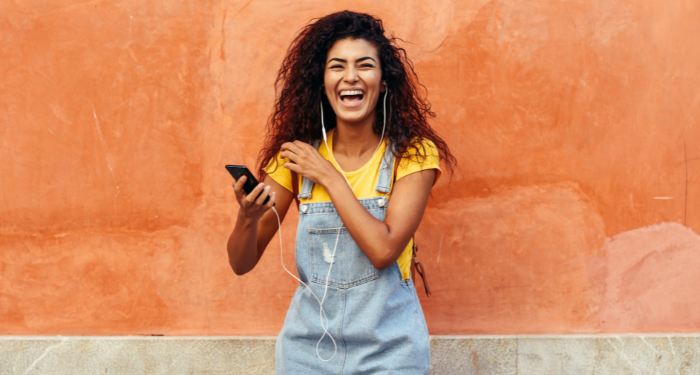 One thing that’s unusual about me is that I really enjoy things that are funny. I know, it’s unique! I also enjoy laughing, believe it or not. And as much as I crack myself up, sometimes I need someone else to make me chuckle. Enter: comedy audiobooks.

Today I’m going to run down some of my favorite comedy audiobooks that combine funny words with a funny voice (or 80). You’ll find some great stand-up comedy audiobooks, memoirs, and everything in between. Well, not everything. For example, you will find no books here on vegetal topics, which I assume would fall between stand-up and memoir. There will not be a single mention of ungulates, despite the fact that it is one of my favorite words. Just good old comedy, ha-haha audiobooks. Let’s go!

If this list gets you excited for more, you’ll be glad to know that Book Riot contributors have previously set y’all up with some great lists of offbeat funny books. Check out these horror comedy books, read up on some excellent romantic comedy books, take note of these dark humor books to provoke your uneasy laughter, and, of course, hilarious comedy manga shouldn’t be overlooked. 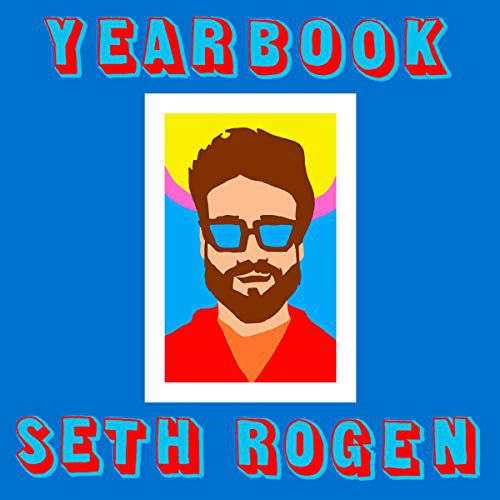 Right out the gate, I have to start you off with my pick for the best comedy audiobook I’ve ever listened to. You’re starting off with the book I chose as the Best Book of 2021. In case you don’t feel like clicking that link and reading what I said about this book in the past, I will tell you:

Then the book is narrated not just by Seth and his great/terrible laugh, but by 80 additional narrators. Yes, 8-0. Check it out, I personally guarantee that you will love it. (Legal note: “Guarantee,” in this usage, simply means that if you do not like this audiobook I will say, “Whoops, you’re wrong!” There is no financial guarantee). 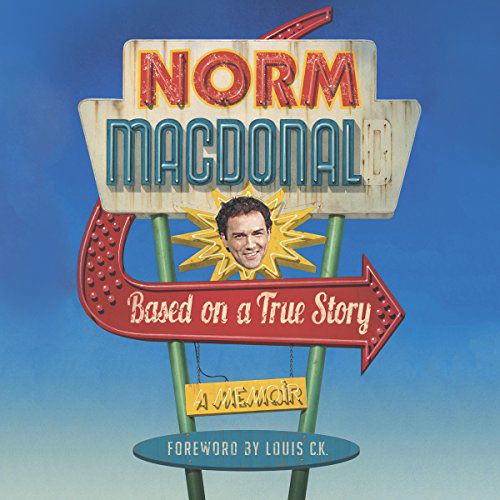 God damn did we lose a talent when we lost Norm Macdonald. One thing about this audiobook is that Norm pronounces his name Mack-Donald over and over again and it does not get less funny. That is just one word he mispronounces to why-is-this-hilarious? effect. My husband, who does not like audiobooks AT ALL loved this book so much that he very nearly called in sick to work so he could finish listening to it. I imagine that if I listened to it now, after Norm’s annoying death, it would be somewhat sad. I hope not because all the man wanted was to make us laugh. And god damn did this book make me do that. 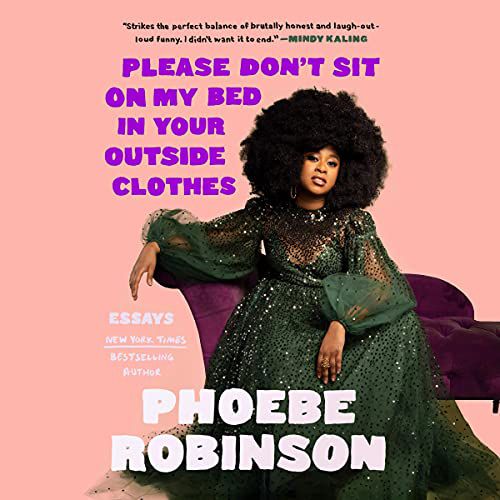 I fell in love with Robinson when I read her first essay collection, You Can’t Touch My Hair And Other Things I Still Have to Explain, and she has not let me down since. In Please Don’t Sit on My Bed in Your Outside Clothes, she covers hilarious memories like her mom being soooo slllowwww while they were getting ready before visiting with First Lady Michelle Obama and important topics like the issues with performative allyship. Swinging from ridiculous to important, she manages to find the hilarious in just about anything. 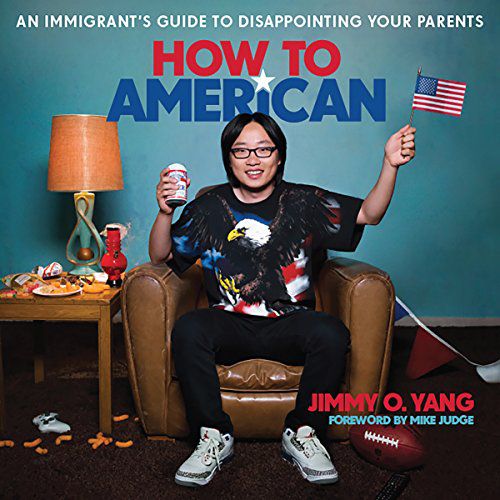 I’m going to tell you a secret: I didn’t love this book. I didn’t actively dislike it (I gave it 3/5 on Goodreads), but it wasn’t for me. But here’s another secret: Not every book is for me. It’s surprising, I know! The internet loves this book and especially loves Yang’s recording of it. I don’t think a list of comedy audiobooks would be complete without at least one book I don’t like, because if there’s one thing I don’t like, it’s comedy that’s meant for everyone. If you want stories of an immigrant who, as the title suggests, is very, very good at disappointing his parents, then this one is for you. 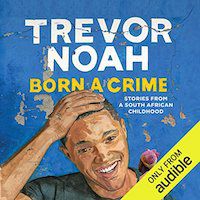 Trevor Noah’s memoir is fantastic enough that I think it’s required by law that you have already read it. That said, I had to include it because what if you hadn’t heard of it? Can you imagine? What if you have had it on your list and needed a little nudge to get it into your ears? Here’s your nudge: this book is indeed as good as you’ve heard it is a billion times. It’s a great story, with asides that are both heartwarming and, yes, funny. 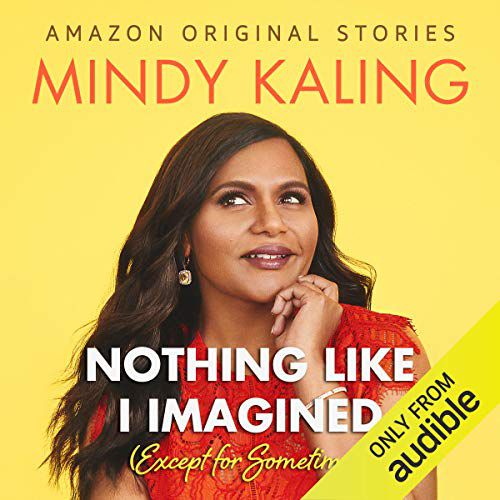 Mindy Kaling has written a few books and they’ve all been turned into some of the funniest audiobooks you’ll find. I chose this collection for a few reasons. First, it’s the most recently published so you might not have even heard of it. Exciting! Second, it’s actually a collection of standalone bits she published with Audible in 2020. They were collected into Nothing Like I Imagined and subsequently nominated for a 2021 Audie Award for Best Humor Audiobook. 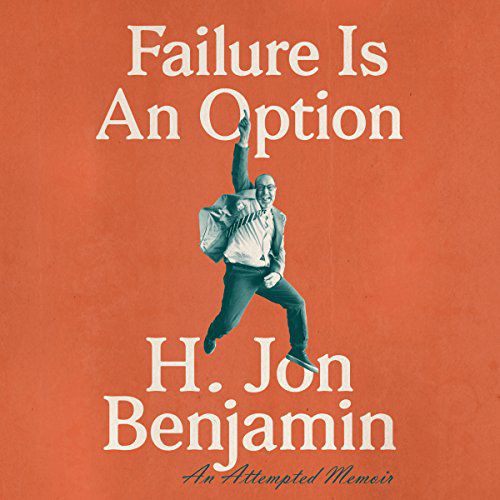 I love so many things about this audiobook. H. Jon Benjamin, who you are most likely to know as the voice of Bob Belcher from Bob’s Burgers, is just as funny and dry as they come. While the entire book is great, if you have ever found yourself in what we’ll call a Samantha Irby situation (i.e. shitting diarrhea on the side of the road) then you in particular will appreciate a certain chapter. I also love the point of the book, which is that, yes, it’s also okay to fail sometimes. And not in that “failure leads to success!” toxic positivity sort of way. Straight up failing, full stop. Totally fine. Totally an option. Don’t believe me? Benjamin will tell you all about it. 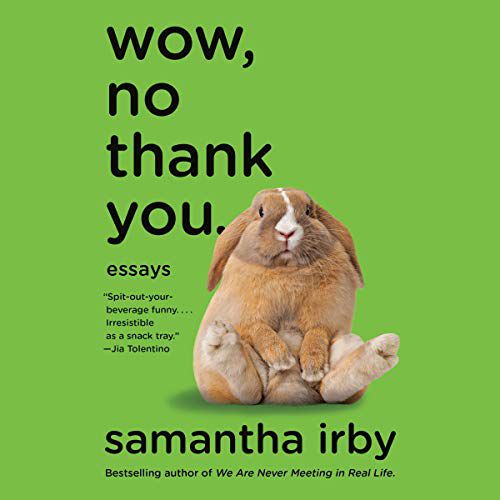 It’d be downright rude of me to refer to Samantha Irby’s terrible by-the-side-of-the-road poop emergency and not actually pump up one of her books. I was trying to pick a favorite, but they’re all my favorite (don’t tell my other favorites). So, once again, let’s settle on the most recent. Irby doesn’t write “jokes,” she writes about her life humorously. Which to me is much funnier than most “jokes.” She also writes a few newsletters that will blow your mind. One is a semi-regular analysis of who was on Judge Mathias and what happened. This makes it sound fancy. It is extremely not fancy and also extremely funny. She also writes a newsletter about what she’s reading/watching/listening to, etc. In the last one, she described The Old Man as “old ass Jeff Bridges shuffling around grunting incoherently while killing bad guys and chilling with his cute attack dogs???” Sign me up for all of it. 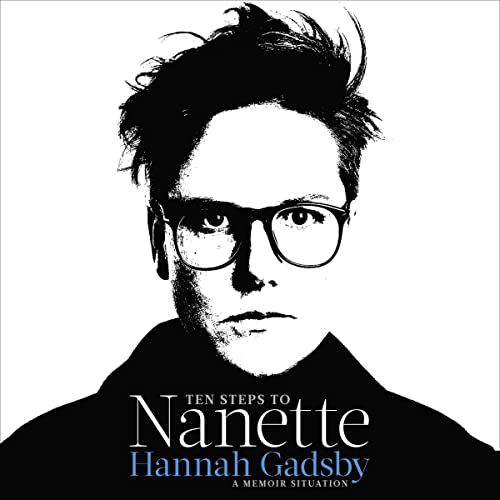 If you haven’t seen Nanette, the Peabody-winning special by Gadsby, stop it right now and go watch it. It’s fantastic. If you have seen it and haven’t seen Douglas, her follow up, stop it right now and go see it. If you have seen them both you might think your homework is complete. Not quite. Now there’s this audiobook which is like being in Hannah’s head while she writes and performs Nanette. As you can imagine (or will be able to imagine once you’re done with your homework), it’s both hilarious and a little sad in there. But mostly hilarious. 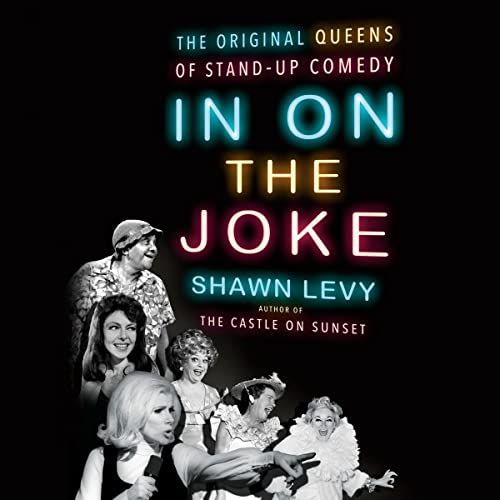 In on the Joke: The Original Queens of Standup Comedy by Shawn Levy, narrated by Julienne Irons

What if a funny fellow wrote a book? What if it was about standup? No, wait, what if it was about WOMEN in standup? And there was a focus in particular on women of color? And wait, what if — hear me out — the book did cover the importance of these trailblazing women but it also focused on just how damn funny they were? Well I’ll tell you what if! If all that happened then I’d be writing a roundabout blurb about that book and recommending it in a post about the funniest comedy audiobooks. Very cool. 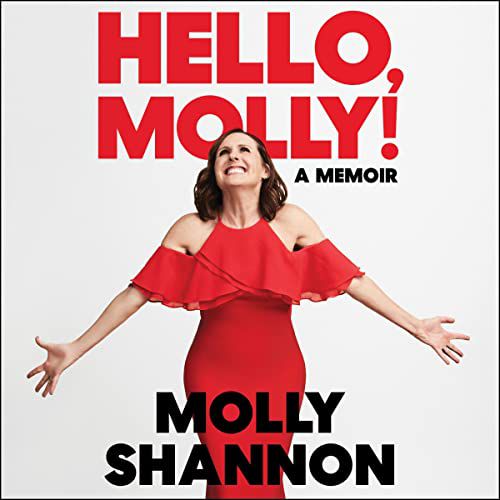 Don’t freak out, but I’ve neither read nor listened to this book yet. How dare I recommend it! But here’s the thing — I have heard her pump it up on about a billion podcasts. After the first few I thought to myself, “Damn, am I in love with Molly Shannon?” and the answer is a resounding YES. She is so clever, funny, and fabulous. Her story about sneaking onto a flight to NYC as a teenager, with no money and nowhere to stay, is just too damn good. Check it out, I’ll give you that guarantee again in which I just tell you you’re wrong if you don’t like it. 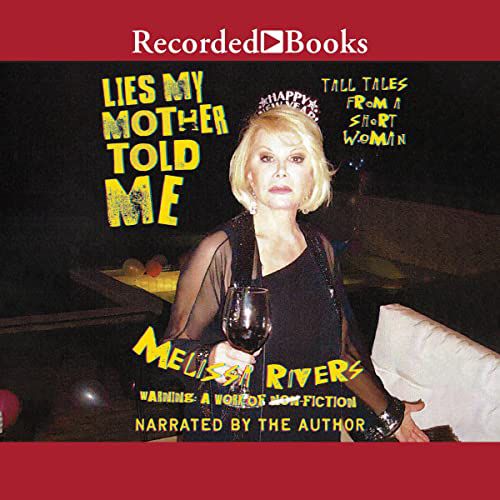 I have mixed emotions about Joan Rivers. She was absolutely trailblazing for women in comedy. She was also a catty so and so, which is not my favorite type of so and so. This book, which tells the story of Melissa’s life in the only way I can imagine it be told — centered on her mother’s life — is indeed very funny. It’s also very thought provoking and complicated. What is clear from my listening is that even when Melissa doesn’t agree with or appreciate her mother’s choices, she always respects her as a mother and a person — but first and foremost, as a comic. 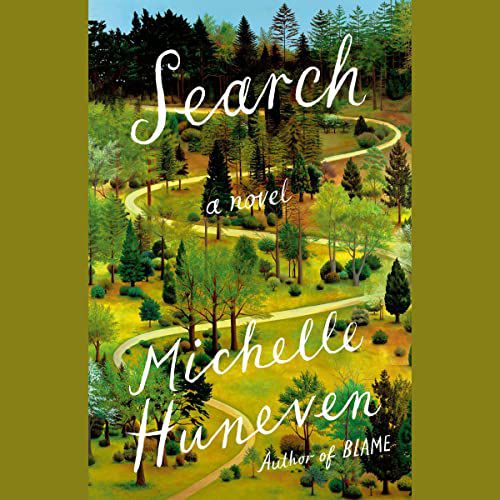 When I read Search months and months before it came out, when there was only one review on Goodreads, I thought, “Wow, I love this book!! But it’s just me.” I thought it took a “special kind of person” to love this book. It turns out all it takes is a person who likes humorous gossip and infighting. Fun! This novel is about a woman who is chosen to be part of a search committee to select the new pastor of their U.U. church. Said woman is a nonfiction writer who decides to secretly take notes on the goings-on to write a book about these types of search committees. The result is funny, so funny, but not in an LOL way. More of a snort and turn to your husband/wife/partner/pet/wall and say, “Jesus, this is funny.” I’ve only read this with my eyes, not my ears, but I feel confident it’s one of the best comedy audiobooks out there, regardless. 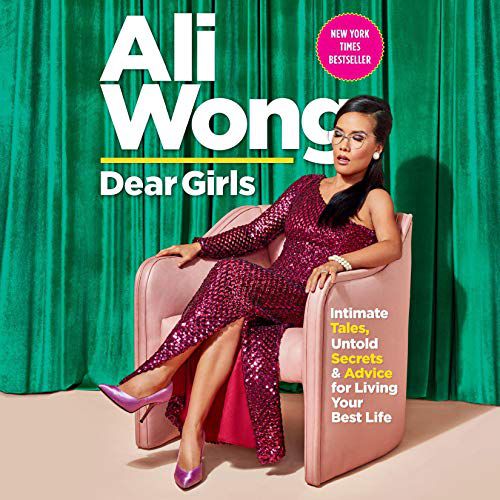 The “girls” in the title refer to Wong’s daughters. A collection of letters to them, this comedy audiobook is indeed comedic. Named one of the best books of 2021 by more than half a handful of publications, this is an insightful, personal, and deeply satisfying listen. 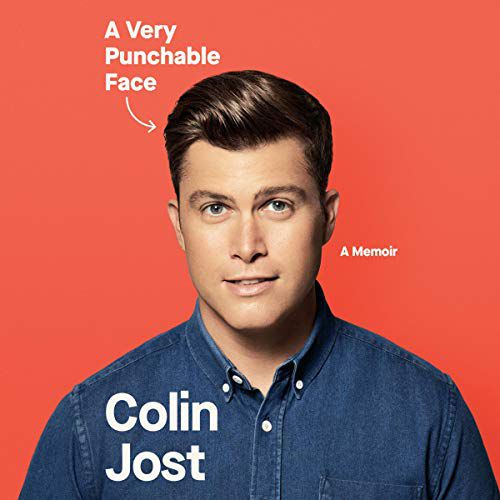 Before I came across this book, I had not thought about Colin Jost for more than 30 seconds at a time and those 30 seconds at a time were just me waiting for him to shut up and let Michael Che talk on Weekend Update. But once I saw the title I thought, “Why yes, I would not at all mind punching you in the face!” If this sounds mean, I invite you to read what the professional pros have to say about why some people truly have a punchable face.

But while the title reeled me in, as it turns out, one of the head writers for one of the longest-running comedy shows is indeed both a good writer and very funny!

Hopefully these 15 comedy audiobooks are enough to get you started on your journey to laughing your pants off and then back on again. If not, write your own! And if nobody likes it, remember my mantra: “Fuck ’em if they can and/or cannot take a joke.”