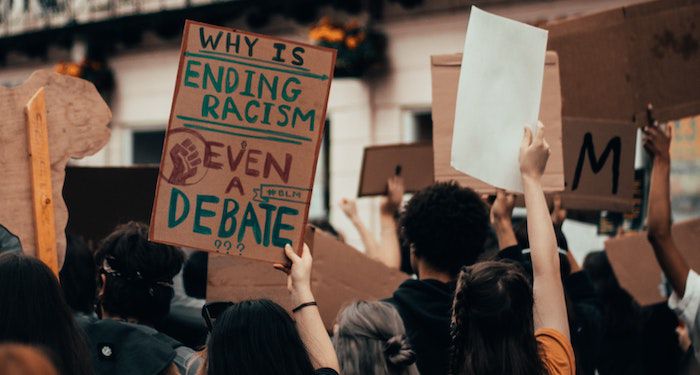 On September 9, we wrote about the student protests happening in Central York after a document meant as a teaching resource — one that included Sesame Street episodes and a documentary about James Baldwin, as well as award-winning picture books featuring people of color — was instead banned by Central York School District. Teachers expressed that they were afraid to teach. Students of color felt unsafe and unsupported in the district.

The next meeting of the board was preceded by approximately 100 people protesting the ban, including speakers such as the president of York NAACP and the commissioner for the City of York Human Relations Commission. Despite parents and teachers alike voicing their frustration at the board’s “freeze” on these resources that has been in place since November of 2020 — the board kept insisting they would have a curriculum committee review it soon — they decided to uphold the ban.

Luckily, in our third news story about this, we have better news! After continuing protests by students and parents, national media coverage, and authors speaking out, the board has finally reversed the ban. Board member Jodi Grothe said, during the September 20 school board meeting, “We speak and listen to parents and community members to better understand and address concerns. We have heard you.” Although the board voted unanimously to ban the list in November 2020, this time they voted unanimously to reinstate the resource list.

Make no mistake, this reversal is a result of the increased attention paid to the ban, both by local protests and national news coverage.

A striking example of the protest came from an alumnus of the district, Don Dehoff, who graduated Central York High School in 1964 and now lives in Buffalo, New York. “You have this all-white school board banning articles of people of color. To me it’s very racist,” he said. Dehoff then mailed his diploma, which he has kept for more than 50 years, back to the school with a letter saying that he wanted to “dissociate myself from Central York School District.”

York County citizen Suze Phillips showed her support for the students protesting the ban by stocking the banned books in her Little Free Library. She put up a sign reading “Share Banned Books Here” and ordered in some of the titles on the list. Phillips explained that she wanted to show that the community stood with the protestors, and she also wanted to make sure that kids had access to these important resources: “I want to make sure that kids in the neighborhood can read some of this material…pro-diversity, anti-racist, alternate history, heroes of people of color. These things should never be banned.”

There’s also an ongoing Amazon wishlist to buy these books and distribute them to LFLs around Central York during Banned Books Week. Or you can donate books through this Bookshop.org list. This is a great way to help get these books into kids’ hands: after all, just because the books are no longer banned doesn’t mean they’re easily accessible for students.

After Brad Meltzer, author of several of the books banned — including I Am Rosa Parks — boosted the wishlist on social media, the donations began to pour in. So far, Hannah Shipley, who organized the Amazon wishlist, has received a stunning amount of support! (Click through the tweet below to see Day 2 and Day 3 hauls as well.) She has received over 1,200 books, with thousands more on their way, according to Amazon. Because it exceeds the amount local LFLs can hold, she also handed them out at the rally. After the ban lifted, she began to offer the books to teachers so they can be stocked in classrooms.

The ban was covered by national news, including CNN, the Miami Herald, and — bafflingly — Fox News, the same channel that has been stoking anti-CRT panic. When Fox News is saying that your ban on picture books about Rosa Parks is a little far even for them, you know you’ve messed up.

When a CNN reporter asked what issues the board had with resources like the Sesame Street episodes or I Am Rosa Parks, the board refused to give any specifics.

A Twitter account called Central York Banned Book Club gathered together information about the ban and highlighted some of the titles that were being denied to students in the district, including A Big Mooncake for Little Star by Grace Lin, a picture book about the phases of the moon. As the CNN report stated, it seems like anything by or about people of colour was seen as a threat.

Students reportedly felt afraid for their teachers. One student asked language arts teacher Patricia Jackson, “Ms. Jackson, are you allowed to have that?” about a Maya Angelou poster hanging on her wall. “Aren’t you afraid you’ll get in trouble or lose your job?”

The school board continues to claim that there was never a ban at all, just a “freeze” on teaching materials that lasted almost a year. York County GOP Chairman Jeff Piccola released a written statement saying, “There is not and never has been any support for the banning of any books in Central York School District.”

But to the teachers who received emails from Central York High School Principal Ryan Caufman in August reading “Please see the attached list of resources that are not to be permitted to be utilized in the classroom,” it sure looked like a ban.

Prior to the September 20 school board meeting, protests continued, lead by the Panther Anti-Racist Student Union (the school mascot is the Panthers). During the meeting, the school board doubled down on the idea that they do not ban books, saying, “We need to remember again, as it was already said, that every book on this list has been available in the library.” This is hardly a defense, though, and instead shows a complete lack of clarity in the policy.

Board Vice President Veronica Gemma also said that they never intended to ban picture books: “Was this grade-specific sublist caught up in the vote last November? Yes it was — and that is my regret, and I am deeply sorry for that.” Students protesting have been clear in saying that they don’t believe the board read the the books they banned, but this statement suggests they didn’t even read the four-page list they banned.

The previously banned resource list includes many links to other lists. There is a category labelled BOOKS, which is followed by a link for “List for Educators” and “List for Learners.” It’s this list for learners that’s gotten the most national attention, because it includes so many picture books that are…confusing, at best, to forbid teachers to use. They range from teaching about historical figures to simply having a child of color as the main character.

Claiming that they didn’t realize this list was included just shows that the ban was done carelessly, without even reading this double-spaced four-page document in full. It’s also disingenuous to claim, as the board repeatedly has, that the ban was not motivated by racism. Board member Tim Strickler stated: “What these parents oppose is the use of diversity training as a tool of activism or political indoctrination, which appears to be the aim of some of the resources,” as if that is a fitting defense. The idea that teaching that racism exists is “political indoctrination” is in itself racist, and it’s no surprise this comes from an all white board. Parents at the school board meetings also claimed the books had “bad ideas” and that they didn’t want their kids to “feel guilty about being white,” as if that’s the takeaway from a book about Malala or the Sesame Street town hall meeting about racism.

It’s well worth celebrating both that the ban has ended and that the donation drive was so successful that kids will be able to access these books. As Brad Meltzer said, though: the work is not done. This board has shown itself to not be up to the challenge of leading education in 2021, and these students deserve a school board that will defend their best interests. In the mean time, though, they’re ready to take up the fight themselves — one they shouldn’t have to take on just to have a decent, relevant education. I am in awe of these kids who protested daily, organized themselves, and got national media coverage of the situation. They are leading the way, and it’s up to us to support them.