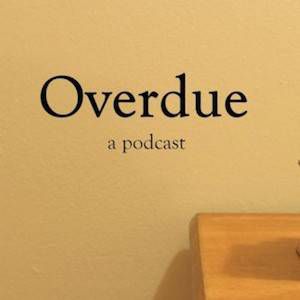 When I heard that my old college buddies, Craig and Andrew, were producing a bookish podcast, I was pretty sure it was going to be awesome.

Somehow, I never got around to listening to it until I had the very great honor of witnessing their first attempted live show: a discussion of Winnie the Pooh that drew a large late-night crowd at our 5 year college reunion. After that, I was hooked.

The podcast – cheekily called “Overdue” – focuses on “the books you should have read by now.” From bestsellers to classics, Craig and Andrew take on big name books that are new to them and discuss their thoughts on air. They touch on the books’ backgrounds and public reception, with a little bit of plot summary and a lot of opinions. They also ask some probing questions, like “If [50 Shades of Gray] weren’t so poorly written, what would it be like?”

Always fun and often insightful, the podcast’s biggest strength is the co-hosts’ rapport. For that reason, I thought it would be best if they had the chance to introduce their podcast themselves. Without further ado, here’s my interview with Craig and Andrew of Overdue podcast.

How would you describe Overdue podcast to someone who has never heard it?

A: That’s why we rarely both read the same book in the same week – it makes one of us the listener surrogate, which keeps things a little more accessible. I’d like to think of Overdue as a book podcast for people who enjoy reading but who maybe don’t do it as much as they’d like to.

What inspired you to create Overdue in its current form?

A: College basically ruined “reading for pleasure” for me, which was sad because once upon a time I was the fifth grader reading The Lord of the Rings in between classes. Overdue was about reconnecting with that kid, and also about cultivating my image as a Classy Gentleman. I’ve read Kafka and Hemingway, you know.

C: And you own that slick gray suit…

C: It’s certainly not my favorite book, but I had a blast recording our Fifty Shades of Grey episode. While it’s not classic (or quality) literature by any means, there was an excitement on both our parts to tackle a book that’d had such a zeitgeist.

A: I just read To Kill a Mockingbird, which is the kind of book I had in mind when we started the show in the first place. It’s an inarguable classic that I should have read and I was immediately sorry that it took me 28 years to get around to it.

Describe your partner with one adjective.

Who is your ideal listener?

A: People who mean well. People who really wanted to get to That One Thing this week and yet, here it is, another Friday, and they still haven’t quite managed. There’s always next week, probably. Because that’s the way I felt about reading books before Overdue (and sometimes after Overdue too). A: It’s always the long ones. I’ve wanted to try and crack Infinite Jest for ages but it’s like the Everest of books. They’d eventually find my frozen corpse about a third of the way up.

C: But a third of the way up is where it gets really good! But yeah, ditto for the long books sentiment. I just started Justin Cronin’s The Passage, and there’s no way I’ll finish it before our next recording session. So I’ll probably be squeezing in a smaller book in the meantime and hope I don’t lose my sense of what The Passage is up to.

Is there anything else you’d like people to know about Overdue podcast?

C: Just that we’re not approaching these works as literary scholars. We’re reading and talking about the books as two dudes who happen to like stories and having a good time. Each show is an attempt to recount the interesting parts of a recently read story while having a good time with each other and with the audience.

A: I love doing this show and I’d love it whether anyone listened or not (but for real you should listen and I hope you like it as much as I do).