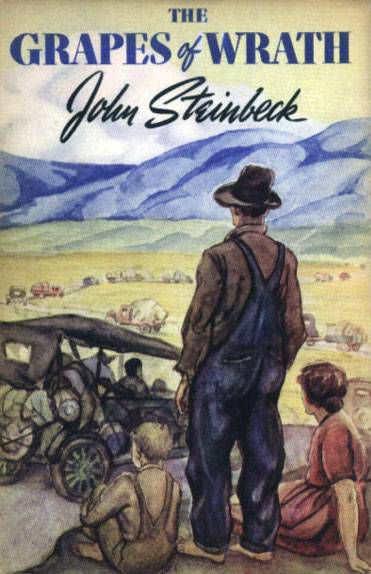 Even with your nose stuck in a book on the beach, it’s been hard to ignore all the political noise this summer. Whether it’s stuff happening internationally, or the campaigns going on here at home, sometimes the miasma of political conversation can seem almost stifling. But never forget, where there’s a bunch of people who sincerely believe in things almost to the point of zealotry, there’s an opportunity for you to poke fun at them. Wherever there is a glutt of sincerity and dearth of irony, there’s a chance for you to troll, in modern internet parlance. And what better way for a bookish person to fan the flames of political rancour than by making controversial book recommendations? And so the following, a list, not exhaustive by any means, of some of the best novels to recommend to your conservative friends, sure to make their heads spin and their claws show. And don’t worry, members of the Grand Old Party, your list to tick off those Big Government Libs is soon to follow.

1. The Grapes of Wrath by John Steinbeck

Not only is it required reading in our failing public schools, but it’s a moving saga of why we as a nation decided to create a social safety net in the first place. Never has victimhood been so gloriously and expertly rendered in American literature.

Even though it’s his shortest work, your “blame the victim” friends will have a difficult time wading through this thick tome. Dickens is a sort of antidote to Ayn Rand, shamelessly speaking out on behalf of the little people. It’s a nice reference to drop when your conservative friend says, “I just don’t understand why we have all this government regulation.” To which you respond, “Um, have you ever read Hard Times?”

Set in the politically important swing state of Florida, this book not only questions how the state treats sex offenders, it also paints those offender as complex humans whom we can identify with. People who have done something bad are still humans who don’t necessarily deserve to be homeless? Conservatives will vomit into their hands when they hear this.

Another one that’s a classic for a reason. I’d be hard pressed to come up with a better book to question the sanity of war and military culture.

The interesting thing about this one is that the politics are so finely interwoven into the plot that it might seem any overt political message is accidental. But anyone who knows John Irving knows that he’s as concerned with politics as Vonnegut or anyone else. If your conservative friend doesn’t want to read this pro-reproductive rights novel, suggest they watch the movie.

6. Stranger in a Strange Land by Robert Heinlein

FREE LOVE IN SPACE! THEIR HEADS WILL SPIN!

7. The Tortilla Curtain by T.C. Boyle

If they don’t put it down for the humane treatment of illegal immigrants, they’ll throw it across the room for the skewering of gated communities. There might be a few jokes at the expense of Volvo-driving, NPR-listening yuppies, but not enough to make up for the way our human connections to the indigent are protrayed in all their complex glory.

8. Our Gang by Philip Roth

This is one of Roth’s lesser-known works, but it’s quite striking. And although Nixon may be one of the GOP’s skeletons in the closet that they just love to forget about, it’s always nice to throw him back in their face with this parody of his administration.

9. Why Are We in Vietnam? by Norman Mailer

Nope, none of this novel take place in the country of Vietnam. Instead, Mailer takes to task the cultural hang-ups that he thinks got us into the war in the first place. There is actually a hunting from a helicopter scene, a la Sarah Palin. Conservatives hate this book.

The newest novel on the list, and the only one to deal with the Iraq war, this wonderfully readable book does something similar to Why Are We in Vietnam?, asking hard questions about the cultural short-sightedness that contributed to our involvement in Iraq. As a veteran myself, I can attest that it’s spot on.

Like I said, this list is by no means exhaustive. There are tons of novels out there that will get under the skin of your right-leaning friends. Stay tuned for the ones that will annoy the Hippies.