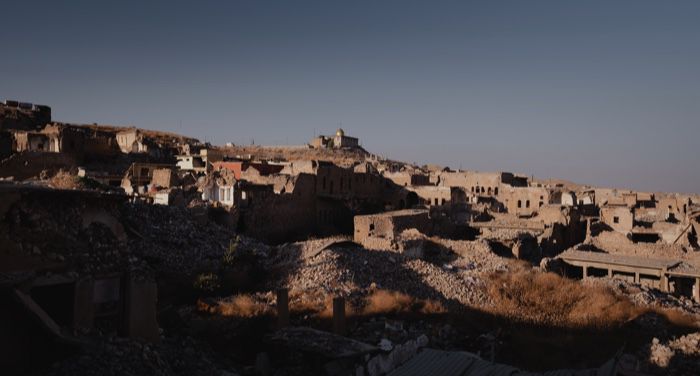 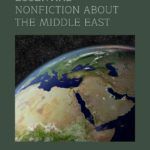 When you search for books about the Middle East, you usually find a lot of covers with veiled women, or shouting, angry-looking men, or Bernard Lewis. This will not be that kind of list.

These are memoirs or other nonfiction I’ve enjoyed or books I’ve planned to read that look interesting, set partially or entirely in the Middle East. They are on or from the Middle East, but are otherwise not meant to be representative. They are from and about human beings and their lives, something that can get lost in some more conflict-focused books.

Perhaps you have read or reread Marjane Satrapi‘s Persepolis and now want to read something else from the wider region, or maybe you have a long standing interest, but have found the usual “Middle East book lists” to be repetitive and obvious (everyone Googles that phrase on occasion, right?).

Ethnography in an Iraqi Village 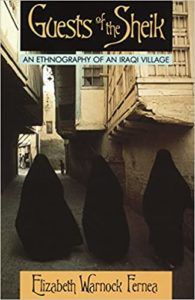 Let me start with one that should be on any list about books on the Middle East. It is Guests of the Sheikh: An Ethnography of an Iraqi Village by Elizabeth Warnock Fernea. This is one that has stood the test of (at least some) time since it was published in 1965.

Warnock spent the first two years of her married life in a village in Southern Iraq, where she moved with her husband Robert Fernea. Fernea was conducting fieldwork for his doctoral dissertation in cultural anthropology; it is still common for students in the discipline to spend a year or more immersed in the culture they are studying.

At the time, Warnock was not an anthropologist. However, she was genuinely intrigued by her host community and worked hard to understand the culture and society of those she lived with during that time.

She is reported to have said that these two years changed the course of her life  and she eventually became an anthropologist as well, focusing much of her work on women’s lives in the region.

The journals Warnock kept during her stay would provide the basis for this volume, her first book. It captures what life was like in a small village in 1950s Iraq and was the first of many publications she researched and published during her lifetime (she passed away in 2008).

In addition to all this, her book is very readable, which is another reason I highly recommend it. She also wrote a book about her time living in Morocco; I haven’t read it yet. Published in 1975, it’s called A Street in Marrakesh: A Personal View of Urban Women in Morocco and has been on my list to read for a while.

Five Years of Interviews on Sex and Other Topics 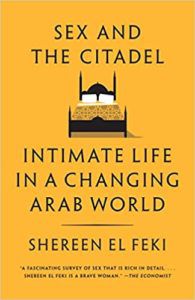 My second choice is Sherine El Fekki’s Sex and the Citadel, which was published in 2013. Luckily, I heard her being interviewed on NPR before I ran across the U.S. cover. While thankfully there are no veiled women on the version I saw, the stylized representation of breasts is rather obvious and unimaginative in my opinion. If I had only seen this cover, I might not have picked it up to be honest. However the interview convinced me to read it and I found her work to be fascinating.

El Fekki is a British-Egyptian journalist and writer, and she wanted to understand more about the sexual lives of regular women and men in Cairo (if memory serves me right) and a few other locations in the region including Morocco. It is a sensitive and engaging presentation of interviews she conducted over five years, covering various topics including virginity, marriage, and attitudes toward same-sex relationships.

Life Under Curfew and Travel Restrictions 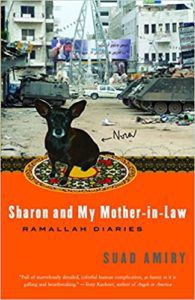 My third book on the Middle East is Suad Amiry’s Sharon and My Mother-in-Law: Ramallah Diaries. This memoir is based on emails and diary entries Amiry wrote between 1981 and 2004. Published in 2006, she details the difficulties and absurdities of life in her West Bank city. I also remember it as very funny in some parts, although it has been some years since I read it. For example, I have now forgotten how she survived being restricted to her house for more than a month with her mother-in-law; however, readers around the world will understand the difficulty inherent in her predicament.

More Nonfiction About the Middle East

And of course, there are always the memoirs I have kept on my list to read in the future. I will just mention a few: The Man in the Sharkskin Suit by Lucette Lagnado, Notes on a Foreign Country by Suzy Hansen, and My Father’s Paradise by Ariel Sabar.

Lagnado’s book has been on my (ever expanding, hardly ever shrinking) TBR since at least 2010. It focuses on her father’s life as a successful business man in Cairo leading up to World War II, and her family’s great reluctance to leave Egypt and live in exile. While it does not necessarily sound like one with a happy ending, reviews of the book have said that Lagnado writes a sensitive and loving treatment of some difficult family history.

Another book on the Middle East that I want to read is My Father’s Paradise: A Son’s Search for his Jewish Past in Kurdish Iraq. Like Lagnado, Sabar is a journalist who wrote about his relationship with his father and his family’s history in the region. He published his book in 2008.

This means that Lagnado’s and Sabar’s books have been on my TBR for about 8–10 years, so it might be time to read them. Fortunately or unfortunately, I keep adding more like Suzy Hansen’s Notes on a Foreign Country about her time living in Istanbul, which is less about family history (as far as I can glean from reviews) and more about her perspective as an American abroad. However, it’s hard for me to pass by a book about living in Istanbul and not want to read it.