As someone who is half-Khmer, it’s always been a looming fact in my household that my father survived the Cambodian genocide as a child in the late-1970s. Half of his immediate family perished, alongside two million other Khmers. Like many other children, I grew up with the label of “second-generation refugee,” a label put on me by the Cambodian community that described my status as an American-born child of a first-generation refugee.

I was an American-born child of a man who was forced to leave his whole life behind and quite literally run for the Thai border with barely anything but the clothes on his back and some family members. I was an American-born grandchild of a couple whose faces my father no longer remembers and whose basic information has since been lost to time and tragedy. No one really knows how to spell Da and Yeay’s names anymore, and—from what I gather—no one really knows from whom the family surname actually came.

It’s always been difficult to talk to my father about his childhood. He lost his parents and his sister to a needless genocide that started when he was about the same age I was in the first grade. As a result, he has dealt with the subsequent trauma it’s caused for the past four decades and counting. It’s understandable that he’s not as open about the one eternal burden in his life he’d give anything to be rid of.

The trauma he endured has since rippled into my life. I grew up struggling to hold onto whatever pieces of the Khmer culture my father could salvage from his mere six years of normalcy in the very beginning, which wasn’t much. He tried to teach me the language, but I never retained anything beyond the alphabet and basic greetings. The barrier remained between my father’s past and my present. I am 18 now, and I have yet to foster that same connection with my father’s heart and soul through his first language, as many children do within their first few years of life, and through no fault of his own. From beyond the grave and across the globe, Pol Pot and his regime effectively erased half my heritage.

I couldn’t connect to the only group of people who shared my family’s experiences because I couldn’t speak our language and barely knew our culture, but it’s not like non-Khmers would understand any better. Often, when I talk about my heritage to a non-Khmer, the first question I’m asked is “What’s Cambodia?”

The first time I ever felt remotely understood by someone outside my own personal bubble was when I began reading books about the Cambodian genocide and those who survived it. In a way, the books I read felt like small windows into my father’s past that I could peer through without causing him more undue pain. Through these windows, I could look inside the worst of his experiences without tearing down the brick walls that encased them.

There are loads of books about the Cambodian genocide by survivors that accurately portray their experiences. However, there were three books in particular that connected me to my father and his experiences more than ever. 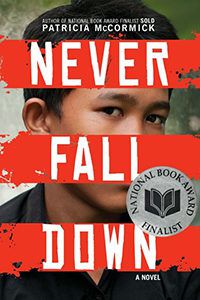 It was 8th grade in Mrs. K’s English class that we were given a choice among a small pool of books to read. We were ultimately supposed to group together based on which book we chose for assignments and discussions. One of the books on that list we were given was Patricia McCormick’s Never Fall Down, which was based on the experiences of a man named Arn Chorn-Pond. While we could indicate our preference for which book we were assigned, in the end it was up to Mrs. K. Upon learning that the book was about the Cambodian genocide, I asked my teacher to place me in that group. After I told her why it was important to me, she did.

Never Fall Down was the very first book I’d ever read directly concerning the event that stole the lives of family members who perished long before I could even meet them. It was the first of the pool of books about the Cambodian genocide that allowed me a better understanding of my father. As such, I immediately felt a connection with the man whose story was being told. At this point in my life, I wasn’t familiar with the most heart-wrenching parts of my father’s experiences. Here, though, they were laid out before me in stark black ink and white pages.

I remember sitting in the dark at night next to my bedroom window. There was a single stream of moonlight seeping through the blinds. I had this book in my grubby little hands, and I thought, “This is like Dad.”

Reading this book and doing these assignments encouraged me to ask more questions about my father’s experiences. Because of it, I was brought closer to him and his past in a way I never thought I’d be. I reveled in the rare closeness I felt with my father. For once, he finally let me peek through the walls around his heart. 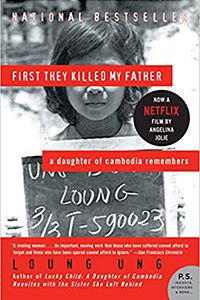 First They Killed My Father is probably best known as a Netflix original movie created by actress Angelina Jolie. In fact, it was my mother who introduced me to the movie in the first place. She loved it because of how raw and real it was. However—as is the natural progression of nature—long before the movie was ever conceptualized, there was the book. In it, Cambodian American Loung Ung describes her own experiences surviving the Cambodian genocide as a once-upper-class child.

Knowing me, I prefer the book over the movie in any circumstance. As such, high-school-me was elated to find the ebook through the local public library. I borrowed it for the few weeks allotted and read it. While this story wasn’t as reminiscent of my father’s story, it was still one that resonated with me regardless.

I was introduced to a carefree child who was a bit of a troublemaker. She—Ung—lived in a family that was financially comfortable and whose patriarch was a high-ranking government official. However, the book quickly plunged into the darkness of the genocide following the Khmer Rouge storming her town.

What’s significant about First They Killed My Father for me was that I read it when I was 16. I was enrolled that same year in the formidable American history/literature block class. It was a class collectively referred to as “AmStuds.” It was largely known at my school for its complexity and heavy coursework. There was a single major project that spanned throughout the entirety of the course called the Family History Project. It was just as its name described—a project that detailed the family history of the student doing it. This meant essays, family trees, and interviews all about my family and me.

Inspired by First They Killed My Father, I interviewed my own father on his early childhood in Cambodia. I learned about his very first memory of hunting birds on horseback with my grandfather—my da. His own father, who was the first in our immediate family to die by the Khmer Rouge. He told me about the day he learned of Da’s murder. He spoke about fleeing to the Thai border with nothing but the clothes on his back. I typed his responses to my questions as he answered them. I felt just a little bit closer to him than before. 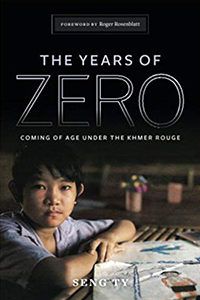 The Years of Zero: Coming of Age Under the Khmer Rouge by Seng Ty

I read this book quite recently during my second year as a community college student. Considering my full-time course load, it was difficult to fit in a decent read. However, I felt compelled to pick up this book as I passed by it at the public library, so I did. I checked it out and read it.

The first thing that caught my eye about this book was the map and timeline featured in the front. This was a common feature of books about the Cambodian genocide. However, something about this one was particularly poignant to me. It evoked a longing for a country I’ve never truly belonged to—or at least never felt like I did.

The Years of Zero details the story of Seng Ty, the author, and his experiences growing up during the Cambodian genocide. This struck a chord within me, as I had just become a legal adult that same year. It was a time I spent mulling over my own coming of age and the major changes I’d be facing in the very near future. Not only that, but it reminded me once again of the coming of age my father had—or, more aptly, didn’t have. It called to mind interviewing my father for that project a mere two years prior. While Ty’s story and my father’s were far from mirror images of each other, the pain and longing they felt were where they converged.

Throughout my life, nothing has helped me feel closer to my father than books, particularly books about the Cambodian genocide. While he struggles to explain the complexities of the feelings and experiences, these books shed at least a little light. Where his reserved and quiet nature prevents him from having those kinds of serious conversations, these books helped me understand at least a little more. I can only hope that the future holds more of these small glimpses into my father’s life.