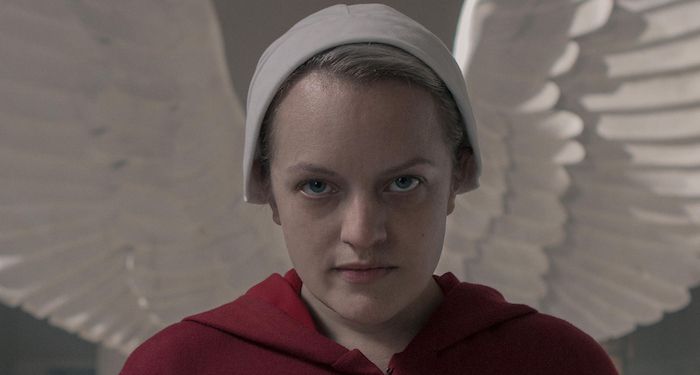 My introduction to Elisabeth Moss was her run as the daughter of President Bartlett in The West Wing. She’d already been working for nearly a decade at that point, and has gone on to star in increasingly popular and award-winning shows and movies in the decades that have followed.

Though Moss is very tight-lipped about her life and has let few bookish facts out, the sheer number of bookish projects she’s been involved in makes it hard to imagine that she’s not a truly bookish person.

Born July 24, 1982, Elisabeth Singleton Moss began acting in the early 1990s and came to fame not long after in her role as Zoey Bartlett. When that show wrapped, she went on to start as Peggy Olson, a secretary/copywriter in Mad Men.

Today she’s perhaps best known as June Osborne in the Hulu adaption of The Handmaid’s Tale, but between these powerhouse roles, she’s taken on a handful of other bookish roles and let slip a few bookish facts about her life.

Elisabeth Moss Has Got a Grand Imagination

In an April 2022 New Yorker Interview, “How Elisabeth Moss Became the Dark Lady of the Small Screen,” Moss says she’s always had a “transportive imagination.” She references reading Little House on the Prairie and pretending she lived on a farm.

She believes she “must have read a book about a garden” as she recalls roleplaying gardening by herself. In my mind, she must be speaking of The Secret Garden, but I suppose it’s possible there has been more than one book written about gardens in the history of the world.

Reportedly a great student, one of her favorite games to play with her parents was library, in which she would stack books on the stairs and check them out and in to her parents. In 2012, when asked by The Guardian to name her favorite book, she kept it simple: “Anything by Salinger.”

Moss has earned many accolades in her day, in part due to her roles that come from books that have earned accolades of their own.

Margaret Atwood’s The Handmaid’s Tale won several awards upon its publication, including the Los Angeles Times Book Prize for Fiction and the Arthur C. Clarke Award, and was nominated for other big-time awards like the Booker Prize. The Hulu adaption has gone on to win literally hundreds of awards with Elisabeth Moss herself being thrice nominated and once winning an Emmy for Outstanding Lead Actress in a Drama Series.

The Invisible Man by H.G. Wells has been adapted so many times that saying it’s been adapted a billion times is hardly even hyperbole. In 2020 it was adapted once again, this time starring Elisabeth Moss. Despite its unfortunate early-pandemic release date, it made more than $143 million globally with a budget of just $7 million. Reviews were overwhelmingly great too, with a current Rotten Tomatoes score of 91% — and Moss was nominated as the Best Actress in a Leading Role by the Australian Academy of Cinema and Television Arts.

There’s an old saying amongst book nerds: “The book was better.” While this is generally true, Moss seems to have a real talent for sniffing out roles that improve upon the story they were based on.

In 1994, Moss stared as Greta Weiler in Imaginary Crimes, a movie based on a semi-autographical novel titled (wait for it) Imaginary Crimes by Sheila Ballantyne. Reviewers of the film had largely positive things to say about the movie, praising the performances, with one big issue: the story itself. Not even Moss and her co-stars Fairuza Balk, Kelly Lynch, and Vincent D’Onofrio, could get this movie above a 60% on Rotten Tomatoes. That said, the capitalist gods downed mead that year with a $70 million gross at the box office.

First a New Yorker article titled “The Old Man and the Gun” and later a chapter in the book The Devil and Sherlock Holmes, both authored by David Grann, the movie The Old Man and the Gun was a hit and holds a 93% rating on Rotten Tomatoes. In addition to Moss as Dorothy, it starred Robert Redford, Casey Affleck, Danny Glover, and Sissy Spacek.

Of course, sometimes the book really is better than the movie. This was the case in 1997 when Moss played Linda in the movie adaption of Jane Smiley’s Pulitzer-Prize winning novel A Thousand Acres. Despite the best efforts of Michelle Pfeiffer, Jessica Lange, and Jason Robards, it’s stinking up Rotten Tomatoes at about 25%, despite near-unanimous positive reviews of the novel it was based on.

Though Moss’s part in 1999’s Anywhere but Here (based on the novel Anywhere but Here, which was a national bestseller when released) was minimal enough that it didn’t warrant a mention on the Wiki page or Rotten Tomatoes, she did just squeak by and show up on the IMDb page. Based on the bomb that was this tear-heavy movie starring Natalie Portman and Susan Sarandon, my guess is that Moss is not losing any sleep over the snub — and I’m going to guess that the book was better, too.

Then we have the fantastic/terrible film that is Girl, Interrupted. Released in all its ’90s glory, let me tell you, I paid to put my butt in the theater to see this gem many times. Moss plays Polly Clark (better known as Torch) who has schizophrenia. The book was a runaway success and the movie was somehow both largely paned and largely awarded. Moss’s co-star Angelina Jolie won the Oscar and Golden Globes that year in the best supporting actress category while the movie holds just a 53% on Rotten Tomatoes, with one reviewer’s take: “Watching a group of teenagers ‘tongue their meds’ (which does not mean doing something rude with a junior doctor) and sobbing out of windows is boring.”

Doesn’t That Sound Familiar? Moss Has Gotten Into the Audiobook Narration Game

Elizabeth Moss doesn’t settle for just reading alone by her lonesome. She lends her classic voice to audiobooks.

The first is no shocker: The Handmaid’s Tale audiobook. As one of the stars of the television series, she was a natural for this, as were the author leads in the Hulu series that joined her in the audiobook recording: Bradley Whitford, Amy Landecker, and Ann Dowd.

In her second narration, the audiobook for Teen Idol by Meg Cabot, Moss reads about Jenny, a high school junior who is so good at solving the problems of others that she doesn’t notice when her own start to pile up.

Moss’s Film Production Company is Making Its Own Bookish Footprint

Elisabeth Moss has started her own production company, Love & Squalor Pictures. It produced the aforementioned Shining Girls based on The Shining Girls. It’s also announced what is currently an “Untitled Elisabeth Moss Project” based on the novel Mrs. March by Virginia Feito, and it’s optioned Imperfect Women by Araminta Hall.

Which of Moss’s many literary adaptions are the best? It seems that by the time a person got around to watching them all for a fair rating, another dozen would have sprung up. What is definite to me is that Moss puts everything she’s got into the beloved books many of her movies and TV shows are based on.