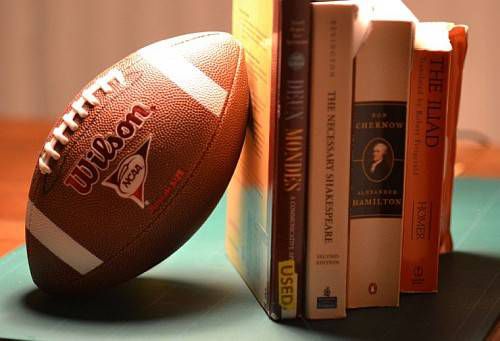 I love sports, and I love books (and I promise that this post is about the latter; just stick with me). Sometimes in that order, sometimes the other way around. And though both bring me great joy, the worlds surrounding both frequently frustrate me nearly to the point of apoplexy. (Isn’t it funny that our passions tend to run the gamut that way?) You readers will sympathize, I’m sure. Whether it’s VIDA’s gender parity (or lack thereof) statistics, hand-wringing over the end of print, or constant judgment about what does or does not constitute litra-tyuah. (For pronunciation help: imagine a stereotypical English butler pronouncing “literature.”) Yes, we (I’ll not feign total innocence) in the bookish world can get things backward from time to time.

But, this week, as I noticed 40-yard dash times and vertical leap heights and hand-size measurements (not a joke) scroll across ESPN’s up to the minute scores-and-news ticker while watching basketball games, as I saw my Twitter feed blow up with reporting on and discussion of said times, heights, and measurements, as I endured endless in-game breakaway coverage and analysis of the NFL Combine, I was thankful for the bookish world. Why? Because the NFL Combine is possibly the most ill-conceived, moronic waste of time the sports world has to offer, and as annoying as some aspects of the bookish world can be, it has no analog for the idiocy taking place this week in Indianapolis.

Basically, prospective NFL players are invited to the Combine every year to work out for their potential employers. Players at each position run, jump, lift weights, perform drills, have their bodies poked and prodded and measured, take a cognitive performance exam (called the Wonderlic test), and subject themselves to endless grilling at the hands of team executives. The pressure is immense, and it’s also… very, very stupid. Because you know what these football players (who have all, by the way, spent the previous three or four years playing at the college level, having their every play recorded and then scoured by the same evaluators who run the Combine) don’t do at the Combine? PLAY FOOTBALL!

Sure, running and jumping and shuttle drills measure things that, theoretically, matter on the field. So why am I all bent out of shape? Because the evaluators on hand change – in many cases, drastically – their opinions of these players’ football ability based on these tangentially related tasks. It’s not an exaggeration to say that executives will pass on drafting a quarterback whom they’ve seen throw dozens of perfect passes under tremendous pressure from top-level competition because they measured a half-inch shorter than listed in college and ran the 40-yard dash two tenths of a second slower than anticipated.

As I was venting my puzzlement about this foolishness via Twitter, I naturally reached for a bookish analogy. How would we treat authors using the NFL’s bizarre method of talent evaluation?

Step 1: We’d start with a novel that has set the back channels of the literary world ablaze. Publishers get into a bidding war for the book’s rights, agents groan with envy, bloggers and critics are begging every contact they have for an ARC the moment they become available. Everyone who has seen a working draft of the novel agrees that it is excellent and that, barring any unforeseen disaster, its young writer will be around for a long while.

Step 3: The industry is still high on the novel, but concerns start to emerge. The media leaks a report from an unnamed source at one of the big six publishing houses which raises questions about the author’s overall skill level. Publishers schedule another round of meetings, at which they test:

The author’s book is rarely, if ever, mentioned during these tests. When the author asks her agent why she’s being put through all this stuff that has nothing to do with her book, the agent tells her to hush, warning her that if the publishers hear her talking like that, she might get a bad reputation.

Step 4: Media reports (later confirmed by officials at various publishing houses) claim that the author’s typing speed (55 WPM) was below expectations, and though her posture was excellent (less than a quarter-inch of deviation from perfectly straight), she did not impress during the document opening drill, and made a number of mistakes during the Dewey Drill. One source also claims that her public reading drill was a disaster. “Pretty mumbly,” he claimed. “Not the projection or the eye contact we usually expect at this level.”

Step 5: The bidding war over the novel fizzles out. Reports claim that one publisher even tried to renounce a previous bid. When asked about the developments, the author keeps a stiff upper lip. “There’s nothing I can do from here, you know? They’ve asked their questions and put me through the motions. I can’t say for sure what they’re thinking, but I think my novel speaks for itself. Anybody who looks at that is going to get the clearest picture of what I bring to the table. I’m just trying to take it one day at a time and get myself prepared for the next step.”

Step 6: The author waits nervously all day in her apartment as her agent holds final discussions with publishers. Between meetings, her agent texts her increasingly bad news. Her stock is in free fall. Something about concerns over her pinky position during the typing drill. Finally, just shy of the day’s end, her agent calls to tell her she has a book deal. It’s not with one of the big six, but a very reputable indie press. The initial print run will be a little smaller than they originally discussed, but now all the stress is behind them and the author can finally focus on getting the novel in top shape for pub day.

Step 7: Publishing insiders are shocked and amazed by the novel’s robust reception. It receives four prestigious awards and is shortlisted for the National Book Award for fiction. The big six immediately open talks with the author’s agent over a multi-book deal.