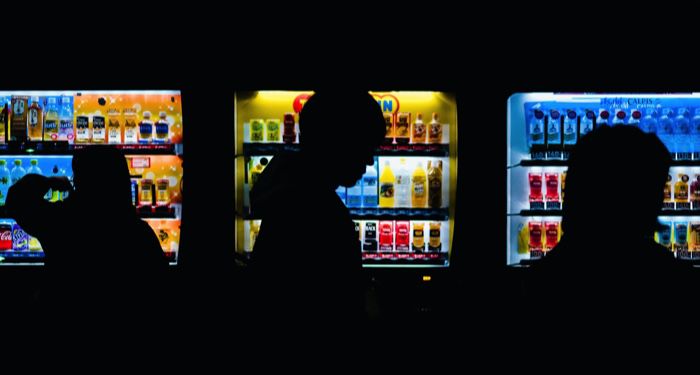 The first known book-dispensing vending machine was actually created by an English bookseller, Richard Carlile, in 1822. Carlile wanted to sell provocative and banned books without being punished for stocking “blasphemous material.” He started the book vending machine in order to sell copies of Paine’s Age of Reason, which at the time could have resulted in the bookseller being jailed. Basically, the idea of the vending machine was that it allowed the customer to purchase the book without ever interacting with Carlile.

That same year, it’s said that Allen Lane, the founder of Penguin Books, conceived the idea for the Penguincubator, which dispensed mass-market paperbacks. According to Penguin’s website, Lane thought up the idea when he was stuck on a train platform without a book to read. He is known for pushing the concept of mass-market books into the publishing mainstream, and he believed “quality, contemporary fiction should be made available at an attractive price.” The Penguincubator fit right into this belief, though Penguin’s book vending machines weren’t widespread — it seems only one was installed in Charing Cross Station in London.

The next big moment for book vending machines came in 1947, when Popular Science created the Book-O-Mat, which “featured 50 different books that could be purchased for a quarter.” Vending machines, in general, became very popular in the 1950s, and since then it’s become common to see vending machines for all kinds of materials. Vending machines tend to stock low-cost items and are located in convenient places where someone might need to purchase something on-the-go.

Schools have even started to install their own free book vending machines. Arthur O. Eve School School 61 installed a free book vending machine that students can access with a special token. The tokens are given out to student’s “no questions asked” — they are not based on educational performance or any other limiting criteria. Unlike books from the school’s library, which also of course provide free books to students, these books are the child’s to take home and keep forever, an experience which is too uncommon for some students.

If you’re interested in starting a book vending machine, the Arthur O. Eve School says their Community Action Organization spent $3,000 on starting the project: $2,000 purchased the vending machine, and $1,000 was spent on books. The vending machines will be continuously restocked by the Teacher’s Desk, a nonprofit school supply store, and direct donations from author’s and publishers.