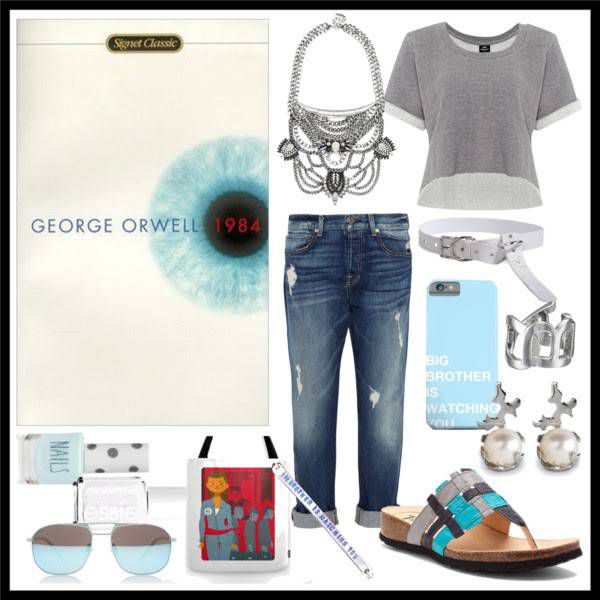 1984, or Nineteen Eighty-Four depending on which edition you have, is one of those novels I would’ve read even if it wasn’t George Orwell’s most famous, or assigned reading in the majority of U.S. high schools (an irony that is not lost on me). 1984 was the year I was born and I can’t not read a book that is named after the year I graced this fair planet with my glorious presence! All not-so-humble bragging aside, I really enjoy good dystopic fiction and satire and Orwell is the king of that genre. Without 1984 and its predecessor, Huxley’s Brave New World, there would be no Hunger Games, The Giver, Divergent, Maze Runner, or their ilk. 1984 brought the concepts and vocabulary of Newspeak, Big Brother, and Thought Police into the public consciousness. If you have ever uttered the phrase “Big Brother is watching you” and haven’t read this novel, shame on you. Fix that nonsense now.

Doing a Book Style for The dystopian novel wasn’t easy. None of these personality-filled wardrobe items would be acceptable for any of Oceania’s residents, but dammit I would try! I’m in the mood for casual weekend wear, so that’s what I focused on here. If you’re reading a novel as cynical and foreboding as 1984, you need to be relaxed and comfy. We have “1984” boyfriend jeans whose tie to the novel should be fairly obvious and a “Gin” sweatshirt tee for Winston’s “Victory” branded gin. A pair of “Julia” sandals, for Winston’s love interest, and a crisp white belt polish off the base outfit. For the accessories I included a “1984” tote bag, some “Propaganda” sunglasses, a “Big Brother Is Watching You” phone case, and two nail lacquers in “Caught Your Eye” (for the ever-watchfulness of the Thought Police) and “Private Weekend” (for Winston and Julia’s failed attempts to keep their affair private). Finishing it all off is the jewelry: an “Orwell” necklace, a “Big Brother Is Watching You” bracelet, an “Obey” cipher ring, and a pair of coral earrings for the shattered coral paperweight *cough* blatant symbolism *cough*.

Now stay aware, alert, and behaved. And remember, WAR IS PEACE, FREEDOM IS SLAVERY, and IGNORANCE IS STRENGTH!