Riot Headline House to Hold Hearing on Classroom Censorship Thursday
This content contains affiliate links. When you buy through these links, we may earn an affiliate commission.
the bibliophiles at Book of the Month. 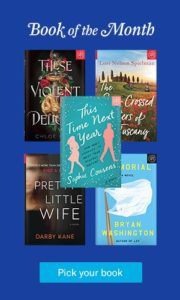 Today's edition of Daily Deals is sponsored by the bibliophiles at Book of the Month.

$2.99 The Iron King by Julie Kagawa
Get This Deal
$2.99 A Phoenix First Must Burn by Patrice Caldwell
Get This Deal