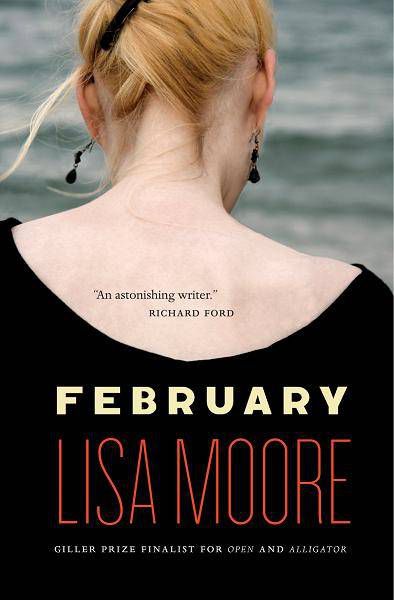 So Canada Reads is a BOOK RIOT EVENT this year, y’alls — I laid out all the goodies in this post, and this is the second week of our seven-week mini-spectacular.  We’re onto FEBRUARY by Lisa Moore now, and this is the very last contender in our little tournament of CanLit.  Today you’ll read this intro post, I’ll be Tweeting my reading progress all week at #brcr5 (please please please read-a-long and tweet-a-long with me!), and then I’ll meet you on the Twitters on Thursday (February 7) for an hour-long chat at 7:30 EST (4:30 PST) to discuss the novel.

And for the first time in this competition, I have to acknowledge my bias: I adore Lisa Moore.  I adore her.  Her short story collection, OPEN, was one of the first short story collections to move me the way Alice Munro can move me, and her novel ALLIGATOR, which I read for grad school, left me completely shattered.  She writes into my soul.

That said, I have not yet read FEBRUARY, released in 2010. FEBRUARY tells the story of the Ocean Ranger disaster and its intimate and personal aftermath for the families effected.  (The Ocean Ranger was an oil rig that sank off the coast of Newfoundland on Valentine’s Day in 1982.  All 80+ workers on board were killed.)  FEBRUARY was a critic success and a bestseller, and was long-listed for the Man Booker Prize.

Lisa Moore is based in Newfoundland, and was part of the Burning Rock Collective, a group of experimental fiction writers in St. John’s that has traditionally worked to publish stories that counter a mythologicial or historicized version of Newfoundland.  They write urban, experimental, critical fiction.  Lisa Moore and Michael Winter (whose DEATH OF DONNA WHALEN was my best book of January 2013) are probably the two most famous collective members, but it’s a group that’s growing all the time and producing interesting work all the time.

I’m excited to finally have a reason to sit and focus on FEBRUARY, and I’m excited to read it with all of you! Remember to tag posts #brcr5 as you’re reading along.

And next week… Canada makes her choice!