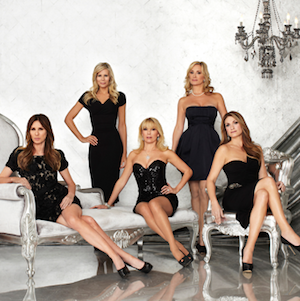 I am late to the wagon for Real Housewives of New York City, but I’m on board now, kids! The show was recommended to me because author Carole Radziwill is on it. So, I watched an episode (mid-season six) about a month ago… and have been hooked ever since. At first I was only interested in seasons five and six (Carole is only on these two). Since I had cross country flights to take – I downloaded these two seasons to watch them on the plane… this is now going to be my favorite thing to do while traveling – there is nothing that makes a flight go faster than some bat-shit crazy.

For those of you who can’t get enough RHONY, here are some book recommendations to hold you over after season six ends…

Sonja Morgan: In college we had a special signal that let our friends know it was time to go home if they had gotten to the point where they were, you know, screaming at people and then falling over in short dresses showing their nekked lady-bits. Now, I watch it on TV and it’s called entertainment… perhaps I should have invested in a video camera all those years ago and produced the first reality TV show.  My recommendation for the Sonja lovers: Valley of the Dolls by Jacqueline Susann.

Ramona Singer: Ohhhh Ramona. I’ve never met someone like Ramona in real life. (Yes, I do thank my lucky stars for that.) She’s loud, obnoxious, easily angered… only difference between her and the ladies of middle school recess yard is the giant glass of Pinot Grigio in her hand. My recommendation for the Ramona lovers: The Essential Scratch and Sniff Guide to Becoming a Wine Expert: Take a Whiff of That by Richard Betts

Heather Thomson: Holla! I actually like Heather. I would walk to Siberia and back to not get on her bad side because I am what they call a wimp… and she is not. However, if you aren’t Aviva Drescher, you seem to be safe. Heather is a badass… she runs her own company, is a loving mother, and a fun wife. She also is a loyal friend, who will try to help you get your business up and running if you are, say, making a toaster oven that nobody thinks actually exists.  My recommendation for the Heather lovers is: #Girlboss by Sophia Amoruso.

Kristen Taekman: Kristen’s tagline for the show is, “I may not be the sharpest tool in the shed, but I’m pretty!” I think she sells herself short. She is actually quite mature and thoughtful, and seems to have her head on straight. Now her husband on the other hand… (excuse me, I just threw up in my mouth)… is the worst. Hello? Oh, 1850 just called, it is asking Josh Taekman to please return to his correct time and place so he can publicly patronize his wife and not care about his kids in an era where nobody calls that asshole-douchebaggery. My recommendation for the Kristen lovers is: Revolutionary Road by Richard Yates.

Carole Radziwill: AKA, the reason I started watching this show in the first place. I love Carole’s fashion, I love Carole’s wit, I love the fact that Carole lives a life that is actually interesting. I don’t love when Carole puts on her holier than thou attitude because, well, we already know Carole is holier than thou. When you are the coolest of the cool, there’s really no need to put extra effort into being above the show you’ve actively signed on to be a part of. Luckily she started getting into the mix mid-season… finally. Carole happens to be an author of two books, both of which I think give some insight into who she really is – but the memoir does it best (as it’s meant to). My recommendation for the Carole lovers: What Remains: A Memoir of Fate, Friendship, and Love by Carole Radziwill.

LuAnn de Lesseps: This season LuAnn seems to be trying to not stir up any trouble – and to stay out of conflict as much as possible (besides getting surprisingly upset about what a New York facialist is saying about her). It seems to be her current jam to do something and then just sweep it under the rug… including meeting Johnny Depp look-a-likes and not… well, not doing who-knows-what. My recommendation for the LuAnn lovers: French Lessons by Ellen Sussman.

Aviva Drescher: I really liked Aviva. Everyone kept telling me how I would end up thinking Aviva is crazy, but I kept on liking her… or rather not minding her… right into season 6. And then it started being harder to ignore the fact that Aviva has an odd temper and she gets rreeeaaalllllyyyy upset and she has an excuse for everything she doesn’t feel like doing and she’s overly dramatic and somewhat manipulative. So, yeah, now I think Aviva is  kinda crazy. But mostly I agree with Ramona on this one: Aviva doesn’t need a book – Aviva needs a Xanax. Or two… or ten. My recommendation for the Aviva lovers is: Sybil by Flora Rheta Schreiber.

So, for my next flight, which RHONY season is your favorite (and which characters)?