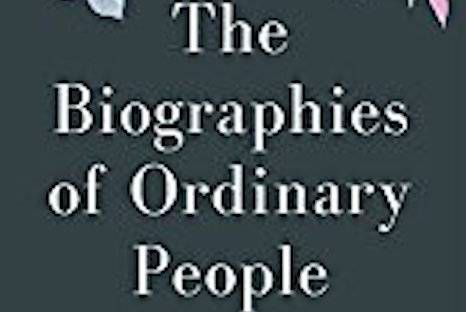 Nicole Dieker is no stranger to the world of online magazine – she makes her living as a freelance writer and editor. This year, however, she released her first novel, The Biographies of Ordinary People, and the characters are just as entranced by books as any Rioter here. I called up Nicole Dieker to talk about her influences, the books she loves, and the process of writing novels about childhood. 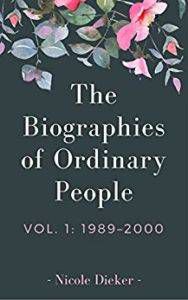 Tell us a little about The Biographies of Ordinary People.

Nicole Dieker: Sure, it’s a novel about family, friendship, art, and the past 30 years. It begins in 1989 with Rosemary Gruber’s 35th birthday, so she’s the mother in the story, and the two book series ends in 2016, when her oldest daughter turns 35. So in between we see, sort of everything that has happened in the world, but more specifically everything that’s happened in their life. They move to a small town in rural Missouri, there are 3 Gruber sisters, who all have artistic and social interests. They do all the things that many people do in their lives.

Definitely. I was really struck by the way that Meredith looks to books she’s read as a guide for how the world works; I was wondering how you think books helped guide you as you navigated the world as a child?

I think they still guide me, tremendously. Books provided two things for me: they provided a social guide, because many books, especially for children, are about behaviors, if someone is nicer they can make a friend! You are reading and absorbing that, but in addition you are having this outlet for your emotions – kids have such big emotions! I probably still have big emotions. Often, I turn to books where the characters are feeling the same things I’m feeling, so we can have this emotional moment together.

In addition to some of the books that the children read in this novel, what would be some novels or other books that inspired you as a writer?

I kept a boxed set of Lev Grossman’s Magicians series on my desk while I was writing, to remind me that you can write a book where the characters are very smart and very ambitious and where they live inside their heads and where they reference a gob of pop culture and literature, and Grossman never goes back and explains himself. He just drops it in, and you are going to pick it up or you can Google it. 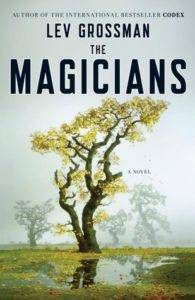 In my novel, you can catch references, or you can Google it, or you can just keep reading, and the story will still make sense. So certainly, The Magicians was an inspiration.

I read a few books afterwards; I avoided reading the Neapolitan Quartet, the Ferrante novels, while I was writing, because I heard that she was dealing with girls growing up over a period of time. After I read it, I realized she was doing something along the same lines; differently, but this was also two girls growing up – it was inspirational after the fact. 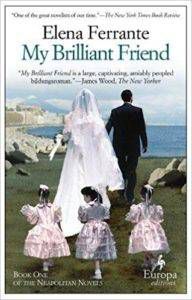 The Ferrante novels have a quality where it feels like not a lot has happened, but when you look back, so much has happened. Do you feel that this is true of your book as well?

Yeah, one of the editorial reviewers mentioned that nothing ever happens but the book is never still – I think that explains it. Nothing major happens, which is funny to say because growing up is pretty major. But there is no big villain, for example, no one is running through the town doing murders. There’s no big mystery to solve except, I suppose, the mystery of life.

Yes. I was also thinking about how it is not a humor novel, but the way children interpret the world and actions of adults can be read as very funny. I was wondering if you draw any inspiration from humor books?

I was trying to hit the notes that L. M. Montgomery hits, because her books are always funny, but they aren’t funny in the “let me tell you a joke” sense; they are funny because humans are funny. That was sort of my model – I wanted to be quietly funny for people who were paying attention. Jane Austen is like that as well – she’s not trying to make jokes but if you look at her descriptions, they are hilarious.

I was also wondering about the style of having many short chapters; was that inspired by anyone, or did that just become the shape of the novel?

I had a couple of ideas. I knew that it was a style that I could write well because I’ve spent so many years writing blog posts, so I knew that I could do the rise and fall of a 1200 word chapter, and I wouldn’t have to teach myself how to write a different type of novel.

That was one thing, but also I was releasing the book through Patreon, so I had 61 patrons who were getting 2 chapters a week, and I wanted to create this thing where they could read it when they received it. It’s hard to find the next free hour in a schedule, but 1200 words is under 10 minutes, so that’s possible.

Do you think the way we are reading as a culture is changing?

I do; I read Roxane Gay’s Hunger, and it’s all written in those short chapters. I just read an interview with Samantha Irby this morning where she talks about her new book, and she said she did short pieces because she knew people would be reading them on the toilet and in the 10 minute gaps in their lives. Sometimes when I get a book out of the library I feel like I have to read this today or if I put it down, I’ll never find the time to pick it up again. I wanted to give people the kind of book they could put down and pick up again. Though many readers have told me they read it all in one setting, so there’s that.

One last question: if you could recommend a book or two for someone who also liked your book, what would they be?

I would recommend the classics, the Betsy-Tacy series; a lot of us read the first few books when we’re young because librarians like to recommend them, but they actually go up through adulthood and marriage, and like Harry Potter, the language gets more complex as they go.

If you are looking for contemporary books, Jane Smiley’s The Last Hundred Years Trilogy does much of the same things I’m doing, but in a longer scope. It follows the family over the course of a hundred year, and she gets really inside the heads of the characters, and then their children and their grandchildren. I very much enjoyed that series.