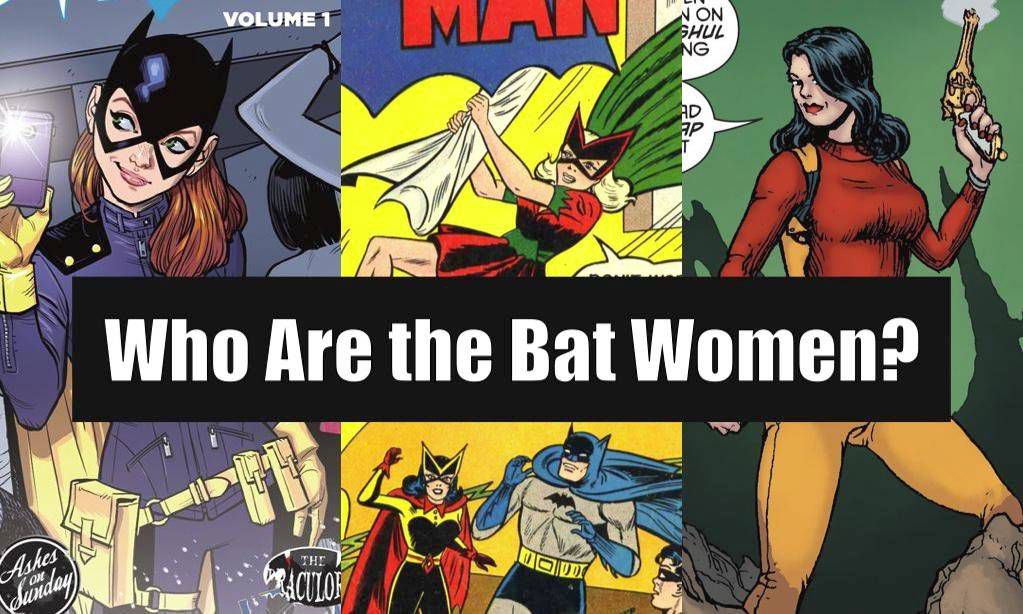 Question for #Batgirl fans: Is Batwoman the mother of Batgirl, and is there a Bat Boy (apart from Robin)?

It’s great to see a literary icon like Margaret Atwood ask questions about comics. Questions are great! Comics or, more specifically, the superhero genre in comics can be confusing especially when it involves decades of history in a shared universe a la Marvel, and DC. I’ve already written about the Spider women who are currently killing it with their own solo titles so why not break down these fangtastic women? So wait, do these bat women have fangs???? (No). Is Batwoman related to Batgirl? (Depends on the Bat-Girl, and the Batwoman). Is Batboy a thing? (Yes! There are also a TON of Robins). How many red headed bat women with psycho siblings are there? (at least more than one!).

So many bat women, so little time…oh, time is not an issue? Cool. Onward! 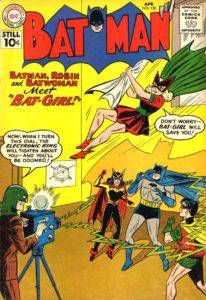 She was the first Bat-Girl when she made her debut in Batman #139 on April 1st, 1961. She was the niece of Kathy Kane (aka Batwoman), and had put on the cowl whenever her aunt came to Gotham City. The pair would team up with the dynamic duo while Bat-Girl also – unsuccessfully – romantically pursued Robin. She made a total of nine appearances as Bat-Girl before becoming Flamebird, and later Hawkfire. After the Crisis on Infinite Earths event in 1985, she went from being the niece of Kathy Kane Batwoman to being the cousin of Kate Kane’s Batwoman, and her history as Bat-Girl was erased from canon. 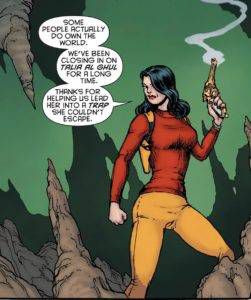 Debuting in Detective Comics #233 on July 1st, 1956, Kathy Kane was a bored heiress who was in love with Batman, and became Batwoman to entice him. After Batman convinced her to give up her cowl in favour of safety, she realized that she missed fighting crime, and the life of a socialite wasn’t enough. She teamed up with the dynamic duo along with her niece, Bat-Girl, and was proven to be quite the badass in her skills as a detective, and puncher of faces. She eventually semi-retired, and bought a carnival (as you do) before being killed by Bronze Tiger on the orders of The League of Assassins. After the Crisis event (mentioned above), Kathy Kane’s history Batwoman remained, but ditched it in favour of being a spy, and eventually the head of Spyral (a spy agency). 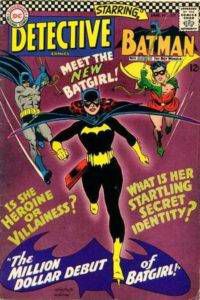 Probably the most recognizable, and well known bat lady among mainstream audiences, Barbara Gordon made her comics debut in January 1967. The producers behind the 1966 Batman television show needed a female character to add to the show’s roster. They wanted to draw in more female viewers to help the show’s sagging ratings, and DC Comics complied with Detective Comics #359: The Million Dollar Debut of Batgirl. A redhead with a photographic memory, a fierce intelligence, and training in martial arts, Barbara Gordon was the adult daughter of Commissioner James Gordon, and a librarian over at Gotham City Public Library. She dressed up as a female Batman for the Policeman’s Masquerade Ball, and on her way, she rescued Bruce Wayne from being kidnapped by Killer Moth. She fought crime alongside Batman, Robin, Batwoman, Supergirl, and Superman, etc., for years before she decided to run for Congress in 1972. When she won the election, she would put on the cowl from time to time before her life changed forever in The Killing Joke. Paralyzed after being shot by the Joker, Barbara transformed into Oracle, and wouldn’t put on the cowl for the next 22 years*. In 2011, New 52 debuted which rebooted the DC Comics universe, and gave us a wheelchair-less, much younger Barbara Gordon** as Batgirl with a whole new origin.

*She was technically Batgirl in Scott Beatty, and Chuck Dixon’s 2003 Batgirl: Year One which gave a fresh spin on the original 1967 origin story. That miniseries isn’t part of the continuity however.

**Barbara is one of two redheaded bat ladies with a psycho sibling. The other is Kate Kane who we’ll get to know in Part 2.

Fun Observation: It seems like the only way to be considered a legitimate Batgirl post-Barbara Gordon was to get Babs’ blessing as the TOB (True Original Batgirl). This’ll become apparent when we explore the other Batgirls in Part 2. Don’t worry, Kate Kane fans! We still have another Batwoman left to explore as well as honourable mentions.

[Editor’s note: We initially wrote that there wasn’t a Batboy in the DC Universe but thanks to commenter, hcarter333, for pointing out that there was an imaginary story in World’s Finest #172 (1967) where Bruce Wayne gets adopted by the Kents after his parents are murdered and becomes Batboy. Comics are weird but that’s why we love them!]

Continue to Who Are The Bat Women? Part 2