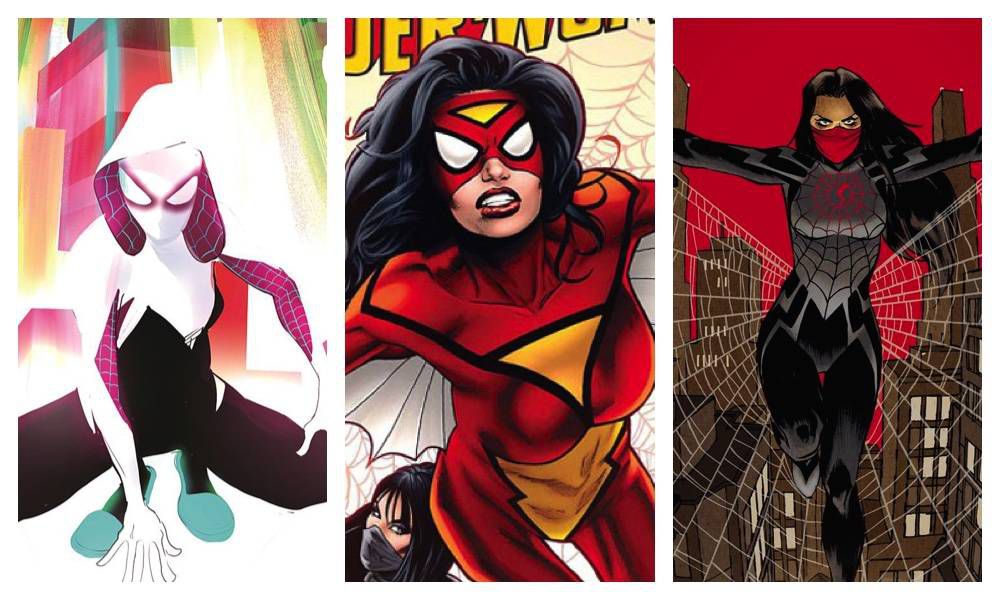 Marvel currently has three solo titles starring Spider women and their books are fantastic. If you’re new to comics, or to these particular characters, how can you tell these ladies apart? How is Spider-Gwen different from Jessica Drew’s Spider-Woman? Who is Silk? How did Gwen Stacey get spider powers? Why does Peter Parker exist in one world but not in the other? DOES THIS ALL TAKE PLACE IN THE SAME UNIVERSE???

Well, I can help lessen some of this confusion by breaking down these kick ass ladies. I don’t do this for the glory. I do this to help people get into these great books and that’s all the thanks I need (but if you can hook this girl up with spider abilities, that’s great too).

When Jessica Drew fell ill as a kid, her scientist dad injected her with an untested spider serum to save her life. This granted her abilities like super speed, hearing, strength, durability, agility, and wall crawling. She doesn’t have Spider-Man’s spider-sense, and she’s able to shoot venom blasts out of her hands instead of webs. Jessica has worked with Hydra, S.H.I.E.L.D., and S.W.O.R.D. before joining the Avengers. She was just part of an event called Spider-Verse where she teamed up with other spider themed heroes against a common enemy.

Where to start: If you want to get a fresh start, I suggest trying Spider-Woman #5 by Dennis Hopeless, and Javier Rodriguez. Spider-Woman gets a fresh look courtesy of artist Kris Anka in this issue, and you don’t have to know her background to enjoy it. It’s a lot of fun, and it’s great jumping in point for people who want to check out the character. I love the issue, and Jessica’s snark. She doesn’t do the banter schtick that we’re used to from Peter Parker, which makes her a standout in a world that has Spider-Man.

We all know the story of the irradiated spider that gave Peter Parker his powers but what we didn’t know was that the same spider also bit Cindy. Pre-bite, Cindy had an eidetic memory. Post-bite, Cindy had an eidetic memory, AND superpowers. Again like Spider-Woman, Cindy aka Silk has the standard spidey abilities with a few exceptions. She can organically produce webbing through her fingertips, and she can MAKE HER OWN CLOTHES WITH HER WEBBING! Her fingers can turn into claws and she has a silk-sense (NOT a spider-sense because she’s her own woman, dammit). Once bitten, Cindy locked herself in a bunker for ten years to avoid detection by the same antagonist featured in Spider-Verse (Morlun). Silk was a participant in the Spider-Verse event.

Where To Start: Silk doesn’t have the extensive history that Spider-Woman does. Created in 2014 by Dan Slott and Humberto Ramos, she made her appearance during the Spider-Verse series. She made her solo debut this year with Robbie Thompson and Stacey Lee at the helm. I love what those two are doing with the character right now so I recommend picking up Silk #1 and #2 which are both available now.

AKA: Spider-Woman (or Spider-Gwen)

A lot of us know Gwen Stacy as Spider-Man’s love interest but what about the alternate universe version of Gwen? In this alternate world, Gwen Stacy is the one who gets bitten by the radioactive spider and shares the same power as the Spider-Man of our world. The Peter Parker of this alternate world dies after turning himself into a mutated lizard and not long after, Gwen is recruited for the Spider-Verse event. Also, she’s part of a girl band called The Mary Janes which is icing on an already bad ass cake.

Where to Start: Spider-Gwen debuted in 2014’s Edge of the Spider-Verse #2 by Jason Latour and Robbi Rodriguez. It’s a great introductory issue to the character, and it stands on its own so no prior knowledge of the Spider-Verse is required. After the success of this issue, people started calling the character “Spider-Gwen” despite being known in her world as Spider-Woman. So the title of her brand new solo series was dubbed Spider-Gwen with the original creative team returning to the helm. She’s still called Spider-Woman within the comic universe because secret identities, people! Spider-Gwen #1 and #2 available to read now.

All three of these series are great and I hope you can check them out when you can. In the meantime, enjoy Face It Tiger by The Mary Janes performed by Married With Sea Monsters.