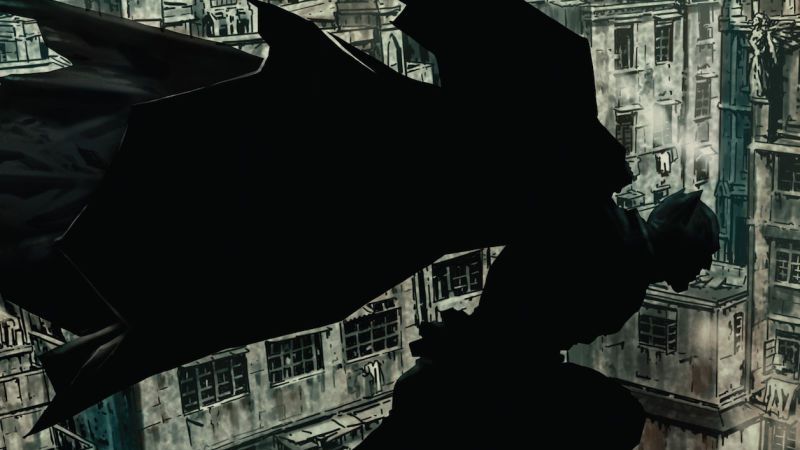 Halloween month is finally here! The absolutely, 100% most fantastic time of the year. Not that my house doesn’t look like it’s decorated for said holiday all year because that’s how I roll, but once the calendar hits October, I can flaunt the aesthetic.

Like my living room, the Gotham City crafted for DC Comics is perpetually gray and haunted, eternally autumnal, and downright gothic in every sense of the word. I mean, the heroes perch on gargoyles, for Hecate’s sake. Foremost among Gotham’s denizens is, of course, the Dark Knight himself, Bruce Wayne, aka Batman. Dude wears his creep factor, quite literally, as armor. And a cape. And a cowl. Spiky gloves. Etc.

Of course, not all of Batman’s stories, not even the creepy ones, are #halloweenmood and that’s cool. Sometimes, even the Dark Knight needs a family moment or time to read or do…the batoosie.

And then, there are those Bat books that are perfect for early twilight and whipping wind and cold rain. For ghosts and goblins and things which aren’t subject to the laws of physics or reality. Those things which confound, and dare I say terrify, the Bat himself.

If you’re as ready as I am to get in the spirit of Halloween, there are some excellent Bat books to lend your brainspace the proper ambiance: 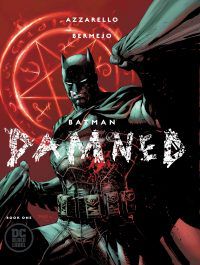 I know, I know. You’re thinking: why? Why do we need yet another Batman and Joker story? And if this were one of the duo’s standard go-arounds, I’d agree. Damned, however, is not your typical bat vs clown fare. As we begin our tale, Bruce is bleeding out in the back of an ambulance and the Joker is a corpse. Like, an actual one. Very definitely dead (at least for the course of this narrative). Without knowledge of how he was injured, his memory surrounding the night’s events a blank, Bats escapes medical assistance and the police, falls into the river, nearly drowns, and finally finds help in the person of one John Constantine. Self-proclaimed “original unreliable narrator” John Constantine. Expert and joyful liar John Constantine.

What’s a hero to do?

He doesn’t have much of a choice. Constantine in his only hope. And, as Constantine reminds us, “…you need my help, you either are or will be soon…beyond redemption.”

Chills, I tell you!

Said Azarello in an interview during SDCC:

Which, having watched Ninja Batman last night, I can verify. After the initial arrival shock, Bruce transitioned to feudal Japanese society with his usual droll alacrity.

Not so much in Damned.

Bermejo added, “It seems like the more modern interpretations of Batman tend to be of the guy who is always ready for every situation. He always has the ace up his sleeve, he can always deal with everything. It makes him…the human element of him is almost not there. It’s almost like The Terminator. He’s a force of will. Ours is much more human.”

Damned, the first of DC’s Black Label titles, is bound in a sort of modified prestige format: larger pages, glossy paper, and an actual paperback cover. Bermejo’s art is intense and photorealistic down to the furrows on brows and the stitches in gauntlets and armor. In short: this book isn’t just a fantastic read, it’s gorgeous.

And sure to creep up your October. 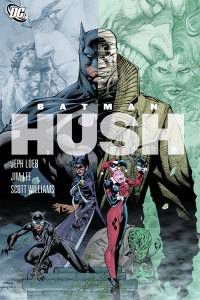 Right. I’m going to start this one out by saying yes, I know: Jeph Loeb is extremely problematic as a human. The Karate Kid thing from Comic Con still makes me skin crawl and only reinforces my determination not to have anything to do with the Iron Fist Netflix show. Only the last in a string of bizarre antics, I acknowledge Hush is officially a problematic favorite but it is a favorite so I’m including it with the preceding caveat. And, yes: I know he wrote another Bat book that has “Halloween” in the title. Hush scared me more.

Also, there are boobs in this one. A lot of boobs.

It’s also a terrifying, creepy, deep story about the nature of reality and what can happen to someone’s mind when the truths they’ve long told themselves, upon which they’ve based not only their lives but their morals, their ethics, and their willingness to risk their lives for others, are shattered. About the ways in which learning one’s parents weren’t paragons, weren’t saints, can affect us, even as self-reliant adults. How sometimes, our enemies are the only ones we can trust.

I’m also a sucker for the long con and Hush follows one of those, the plot unspooling slowly, tantalizingly, and in a manner anything but comic standard.

Sometimes people are scarier than any supernatural creature could possibly be. I definitely found myself looking over my shoulder and jumping at shadows for a few days after finishing this one. Also, the building I work in creaks a lot at night. *shudder* 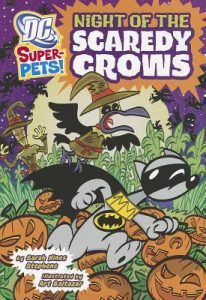 Hey! Don’t judge. Have you read Superman Family Adventures? Tiny Titans? No? You should, they’re delightful and that is very much an okay thing for comics to be. While we write a lot here about how comics aren’t just for kids, there are a fair number of really good all-ages books and the Super-Pets kiddo-targeted chapbooks are firmly in that category.

This series is comprised of volumes that run between 50 and 60 pages. They’re fabulous for kids transitioning between picture books and prose because, while the narrative is written, the word count on each page is carefully gauged for younger attention spans and abilities and there are illustrations interspersed. The art is patently adorable.

The Super-Pets books were some of the first long-form stories my kids followed; my son has aged up but he still pulls them out. My daughter continues to adore them and loves the fact she can now read them to herself and to me. Also, #humblebrag, because of Night of the Scaredy Crows, the first word she ever read aloud to me, when she was about two and a half, was “Gotham,” so…

Night of the Scaredy Crows follows Ace, that Bat-Hound, on a mission to save Halloween from the Scarecrow and his dastardly murder of minions. On theme without being scary, it’s the perfect seasonal Bat book for your little heroes. 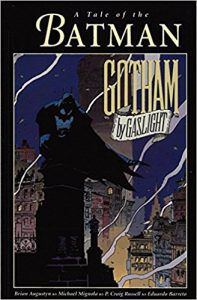 A Tale of The Batman: Gotham by Gaslight by Brian Augustyn and Mike Mignola

Some of the Elseworlds stuff was really good. Gotham by Gaslight is one of the good stuffs. Then again, I’m a sucker for dark Victoriana, especially at this time of year, and am endlessly fascinated by not only the concept of Jack the Ripper but the investigation surrounding his crimes: the questions, the inconsistencies, the ultimate lack of resolution. Of what has to happen in a person’s brain for him to become a stalker and a murderer. Of good gone bad, of evil, of where the line is, when and how it shifts, whether or not it can. Throw in a troubled, grimdark, steam-punk tinged Batman and it sort of has to be intriguing.

Flickering gas lamps. Candles. Dark, horse-drawn carriages. Brick-lined alleys. Shadows. And let us not forget how Mignola earned his fame: Hellboy. Who better to craft a cocoon of Halloween eye-candy? 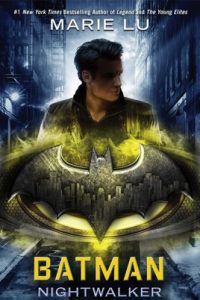 Nightwalker is a straight-up novel, part of DC’s Icon YA line. Herein we find eighteen year old Bruce Wayne: reckless, snarky, and with an edge of uncertainty were aren’t used to from the character. Bruce Wayne, the young man about to come into his fortune and power, his conferred status. A Bruce who will someday be the Bat but isn’t yet. Gotham (which, to be honest, I stopped watching ages ago because it got problematic and weird, even for a superhero show) aside, Batman narratives have gone straight from traumatized child to butt-kicking embodiment of vengeance. But something had to happen in the interim—not everyone who’s subjected to trauma learns martial arts and runs around in a cape, and personal history is more than one event; there can be a crux, sure, an initial impetus, but something has to keep the drive going, to continue to clear the path. Lu’s novel explores one of those events and I, for one, am very much in favor of any story that lends old characters new life through increased depth of character and history. Especially since part of the story is earning community service at Arkham “always creepy” Asylum, where he meets a murderer with ties to a group terrorizing Gotham.

Lu is careful of when and how she mentions The Origin Story; snapshots of Crime Alley are set into the running narrative and placed to provide context for Bruce’s thoughts and actions rather than pathos. It’s a good approach to shaping the character while not providing readers with information they’re likely to have. Ad nauseum.

We also, these days, rarely get to experience a funny Batman or Bruce Wayne. He’s a serious guy with a serious mission but, come on: he raised the ever-cheeky Dick Grayson. Getting peeks of the attitude that fostered Nighwing’s humor and perpetual optimism as a joy.

What are your favorite scary Bat books? Which ones would you recommend for the Halloween season? Any other Bat Family stories focused around holidays other comics lovers might enjoy? Let us know!