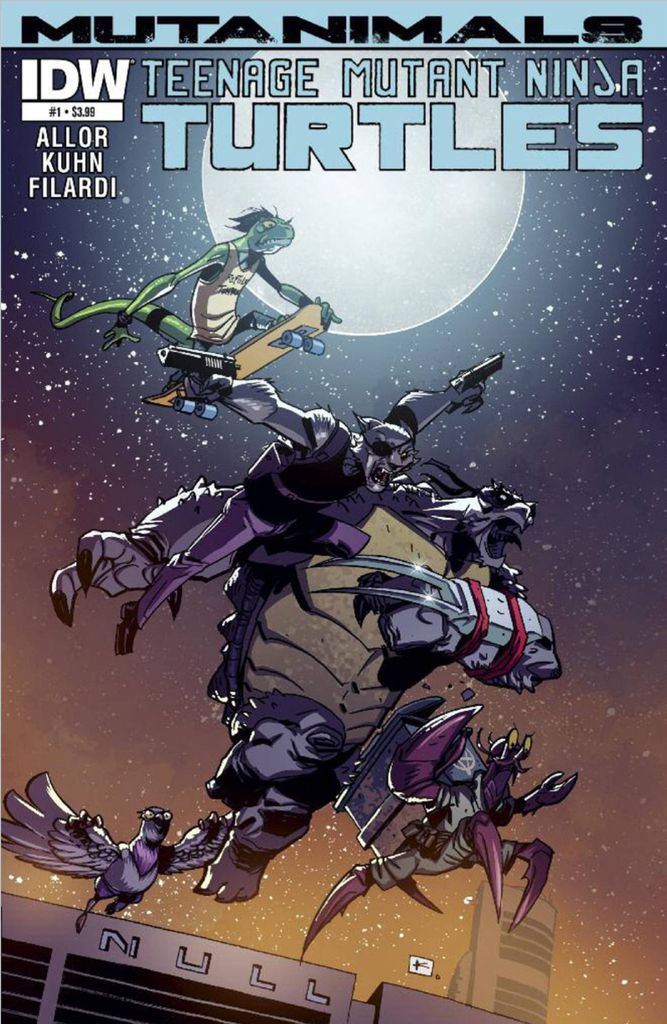 Two new books this time out, one from last week and one from this week — and the common denominator for this edition? Anthropomorphic animals!

For me, the Art of the Start isn’t just about the craft of a new beginning. Sometimes it’s about me stepping outside of my usual fare and trying something different. Mutanimals #1, out last week from IDW, might not seem like it’s outside my wheelhouse, but… look, when I was 18 years old, I decided the most fun thing I could do was get a job at a Toys R Us. It was also the height of Teenage Mutant Ninja Turtles mania, and what seemed awesome quickly became an overwhelming amount of boxes of toys to continuously shelve and re-shelve. After that, all things Turtles-related quickly lost luster for me.

(I do miss my old Usagi Yojimbo figure, though.)

Thus, just looking at the concept of Mutanimals reminds me of allll those damn toys. Luckily, the book has two things going for it: Paul Allor and Andy Kuhn, creators whose other works I’ve enjoyed in the past.

So, this is a new start for me. Taking the plunge into the realm of anthropomorphic animals in a TMNT spin-off series.

And you know what? I’m glad I jumped in.

We’re plunged right into the story as a pigeon and a woman walk down a dark alley. Yeah, you read that right. There’s an obvious absurdity, but this is also comics, and talking cartoon animals tend to fare well in this medium. I don’t really know the characters, but the action is clear. We get a sense that Pigeon Pete has been tasked with watching this woman, and so — of course — by the end of page one, both are kidnapped. I’m actually quite impressed by the efficiency here. Allor and Kuhn get a whole kidnapping “action sequence” accomplished in 3 pages, which sets the whole thing in motion. I still don’t even know this woman’s name, but I get the stakes.

The rest of the Mutanimals return home to their lair/warehouse and realize Lindsey (that’s her name!) and Pete are gone. And there’s a voicemail from Lindsey (made during the kidnapping), which gives the team a trail to follow.

While I can’t say that I could recall any of the names of this group of mutant animals after finishing the first issue, I feel like I got the important bits — there’s a mysterious corporation, a lab, experimentation — exactly the things that a group of experimented-upon human-animal hybrids would hate and fear. That emotion drives the story to a particularly dark scene that I won’t spoil here, but it’s a pretty interesting spin on what I loosely recall as being one of those horrible, horrible brightly colored toys I had to stock and re-stock at the toy store.

And now I see said character in a whole new light.

By the end of the first issue, Allor and Kuhn have kicked you directly into the middle of an escalating conflict; they succeed in delivering a packed spectacle that blends comic banter with some fairly heavy emotional trauma, while raising the stakes on a set of characters that are clearly more than just spin-off toys.

A new Guardians of the Galaxy book written by Brian Michael Bendis is pretty cool, if a little unnecessary, but what made me dive into this new #1 was the fact that ARTHUR FREAKIN’ ADAMS is doing the interior art! That alone is cause to celebrate. But, hey, we’ve got a first issue to dive into, and let’s not assume that everyone knows or cares about ARTHUR FREAKIN’ ADAMS like I do.

I do think it’s safe to say that Bendis assumes that you know the basics about Guardians of the Galaxy if you’re picking up this book. It’s similar to Mutanimals #1 in this regard, as we’re dropped right into the middle of the action with the Guardians of the Galaxy, as they’ve entered Earth orbit under fire of a massive alien ship. We’re dealing with the core film characters: Star Lord, Rocket, Groot, Gamora, and Drax, and the first sequence contains the snappy banter that you’d expect from either the film versions of the characters OR the current series written by Bendis.

This new title is a “team-up” book, which means that the Guardians are going to enter into different stories with various other Marvel characters. So, how do they bring the Avengers into the fray? By flying right by Hawkeye. And, you know, it works because the Avengers here are used in only their most basic form — a team of the world’s biggest and best defenders (er, yeah, I know that’s another team, but you get my drift) that are obviously going to take interest in an alien invasion.

While Bendis works well the quippy dialogue between the Guardians, the Avengers feel a little more generic here. Hawkeye and Spider-Woman get spotlight moments, but to a new reader, the rest of the heroes might just blur together into a lump. You get names, sure, maybe a few examples of powers, but don’t expect to come away from this with some fundamental understanding of who Shang-Chi is, or what Sunspot does, exactly.

The plot is so simple that I’ve pretty much told you everything already. The Guardians and the Avengers team-up to fight off this alien ship, and the final page contains a reveal of the villain behind the plot — which will mostly make sense if you’re a fan of the Guardians of the Galaxy film.

This isn’t a bad issue, but it definitely feels like an exercise in style over substance. In the end, we have a pretty cookie cutter first issue, elevated by well-paced action that’s  beautifully rendered by this Adams guy I mentioned earlier. And the last page reveal should at least pique your curiosity for what comes next.