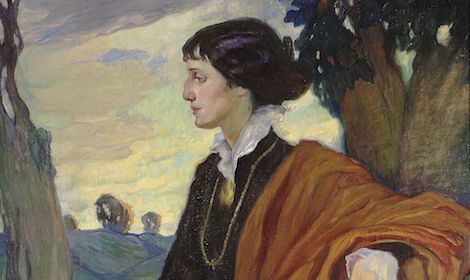 I was 20 when I found Russian poet Anna Akhmatova (1888–1966). I don’t entirely remember how the finding happened—I fell in love with many writers in those days—but I do know that I became obsessed with the way Akhmatova captured conflicting emotions.

Loving someone to the point of pain. Pride in a homeland despite its oppressive regime. Offering words in a time when words will never be enough.

Her poem “The Last Toast” was the first poem I ever willing memorized. I began by learning it in English. Then, years later, after several months of poorly absorbed Russian lessons, I learned it in its original tongue.

There is something, perhaps, not entirely sane about learning a language for the sake of poetry.

I used to worry that if I returned to Akhmatova’s works now, I wouldn’t love them with such desperation; how I respond to poetry can change as I age. However, I recently sat down and reread Poems of Akhmatova, a collection of her works translated by Stanley Kunitz and Max Hayward. In doing so, I discovered that the way she wrote about love, war, and suffering transcends time.

The Life and Times of Anna Akhmatova

…I spent seventeen months waiting in line outside the prison in Leningrad. One day somebody in the crowd identified me. Standing behind me was a woman, with lips blue from the cold, who had, of course, never heard me called by name before. Now she started out of the torpor common to us all and asked me in a whisper (everyone whispered there):

“Can you describe this?”

Then something like a smile passed fleetingly over what had once been her face.”

—excerpt from “Requiem” by Anna Akhmatova

Though reading Akhmatova’s poetry does not require an understanding of Russian and Soviet history, knowing a little about her life certainly enriches the experience.

Born near the Black Sea in 1888, Anna Akhmatova (originally Anna Andreyevna Gorenko) found herself in a time when Russia still had tsars.  In 1910, she married poet Nikolai Gumilev with whom she had a son, Lev. As her poetry from those years suggests, Akhmatova’s marriage was a miserable one.

Then Akhmatova experienced a series of other disasters: the First World War, her divorce, the October Revolution, the fall of the Tsardom, Gumilev’s execution at the order of Soviet leaders.

Starting in 1925, the government banned Akhmatova’s works from publication. Though Akhmatova continued to write during this time, the prohibition lasted a decade. Then, in 1935, her son Lev was imprisoned because of his personal connections. His arrest was merely one in a long line that occurred during Soviet leader Josef Stalin’s Great Purge, in which the government jailed and executed people who were possible political threats. An estimated 600,000 people, including Akhmatova’s friends and literary colleagues, were killed in the Purge.

Despite, or perhaps because of, these horrors, Akhmatova’s creative life flourished. Her poems from this period speak of surviving violence and uncertainly within Russia, of the Second World War, of feeling fierce kinship with her fellow countrymen.

“Half harlot, half nun,” the man in charge of Soviet cultural policy sneered about her.

Akhmatova’s son was arrested again in 1949 and sentenced to 10 years labor in a Siberian prison camp. In an attempt to gain his release, she began to write more positive propaganda for the USSR. She only regained a measure of public respect and artistic freedom following Stalin’s death in 1953. In 1966, Akhmatova herself died at age 76 of heart failure.

I wonder if she found it a dark coincidence to die of heart issues after that organ was repeatedly broken for so many years.

If you want to begin reading Anna Akhmatova and are looking for a place to start, here are ten of my favorite poems by her.

Many of them describe painful experiences, but there is comfort in the beauty that she uncovers from suffering. Just like readers during Akhmatova’s lifetime, we could use that aching bittersweetness now.

“Tell me how men kiss you,

tell me how you kiss.”

…but here Death is already chalking doors with crosses,

and calling the ravens, and the ravens are flying in.

We are the people without tears,

perfidious, base, and irremediably home

I have learned how faces fall to bone,

how under the eyelids terror lurks,

how suffering inscribes on cheeks

the hard lines of its cuneiform texts

The souls of all my dears have flown to the stars.

Thank God there’s no one left for me to lose—