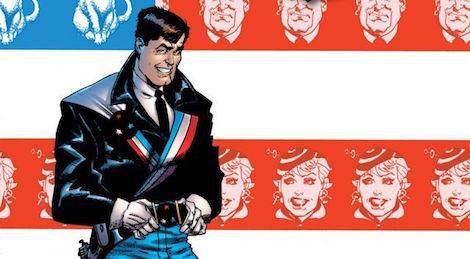 Deadline reported that Luc Besson’s EuropaCorp TV Studios had purchased the TV rights to Howard Chaykin’s American Flagg! Given the intentionally-offensive nature of Chaykin’s Divided States of Hysteria, it’s hard to see this as anything but rewarding bad behavior.

For those who did not follow the controversy over Divided States of Hysteria, the book nominally is intended to explore the divided nature of contemporary American society and the role privilege (especially white privilege) plays in that division. But, rather than explore these issues in a thoughtful way, Chaykin has repeatedly relied on offensive imagery and tropes to make his point.

The first issue, for instance, includes a portrayal of a trans woman that has been widely criticized as transphobic. (She is a trans prostitute targeted for violence after her Johns discover her penis. Oh, and she admits to raping someone years before. Wow, such an innovative story, with such great representation.) To make matters worse, the issue was released during Pride Month and received an official Pride variant cover, making many feel publisher Image Comics was trying to capitalize on queer identity while having no actual respect for queer people.

While criticism of the first issue was largely under the radar, however, controversy erupted when Image released its solicitation for the book’s fourth issue. Issue #4’s original cover showed the lynching and genital mutilation of a South Asian man, whose body was adorned with a racial slur. The cover was so awful—and drew such widespread criticism—that it was quickly withdrawn by Image Comics.

Despite pulling the cover, however, Image’s response to the controversy over the book has been quite poor, to say the least. While the first issue was being denounced for its transphobic content and imagery, Image put out a press release that used the controversy as a selling point:

“Image Comics is pleased to announce that Howard Chaykin (AMERICAN FLAGG!, SATELLITE SAM) has turned the industry on its head once again with his latest, THE DIVIDED STATES OF HYSTERIA. The first issue of this searing dystopian story will be rushed back to print to keep up with overwhelming demand.”

When announcing they were pulling the cover of issue #4, Image released a second statement that read very much along the lines of sorry if you were offended, but you just don’t get what the real point was:

“Far from an endorsement of the horrible violence depicted or the ugly language used by many of the characters, Howard’s goal is to give us a glimpse into a society crumbling under the weight of ignorance, hatred, and intolerance. It’s unsettling to be sure, but it’s difficult to convey the horrors of a world gone wrong without also showing what it looks like.”

Basically, Image and Chaykin admitted he had been intentionally offensive, but it was okay because it served some higher purpose, and, oh, free speech!

Now, with the ink dry on Chaykin’s American Flagg! TV deal, The Divided States of Hysteria is looking more and more like an purposely provocative work designed to raise his name recognition when he was in the midst of trying to sell his earlier series. It worked like a charm.

Chaykin’s transphobia and racism incited just the angry response he likely intended (and at the very least should have anticipated) and made him the central figure in an extended debate over free speech in comics. He could portray himself as the controversial hero, hated by the far right and misunderstood by the far left. It’s hard to see it in retrospect as anything other than clever—and deeply offensive—marketing.

Make no mistake: any merits in the original American Flagg! aside, this is what EuropaCorp was buying: a “provocative” take on American fascism. Given Chaykin’s recent work, I have little hope the TV series—if it is ever actually made—would shy away from the worst racist, misogynistic, homophobic, and transphobic tropes and imagery. It’s built into the DNA of the project. I imagine it as nothing but the Ramsay Bolton scenes from Game of Thrones, but somehow allegedly “justified” because it is commentary on American society and government.

This is ultimately what disturbs me the most about Chaykin’s TV deal: he acted badly, is being rewarded for it, and the ultimate product will likely be yet another in a long line of projects created by cis-het white men who insist the rest of us are simply too sensitive to understand the real point behind their art. It’s truly exhausting, especially when there are so many other comics deserving of attention.