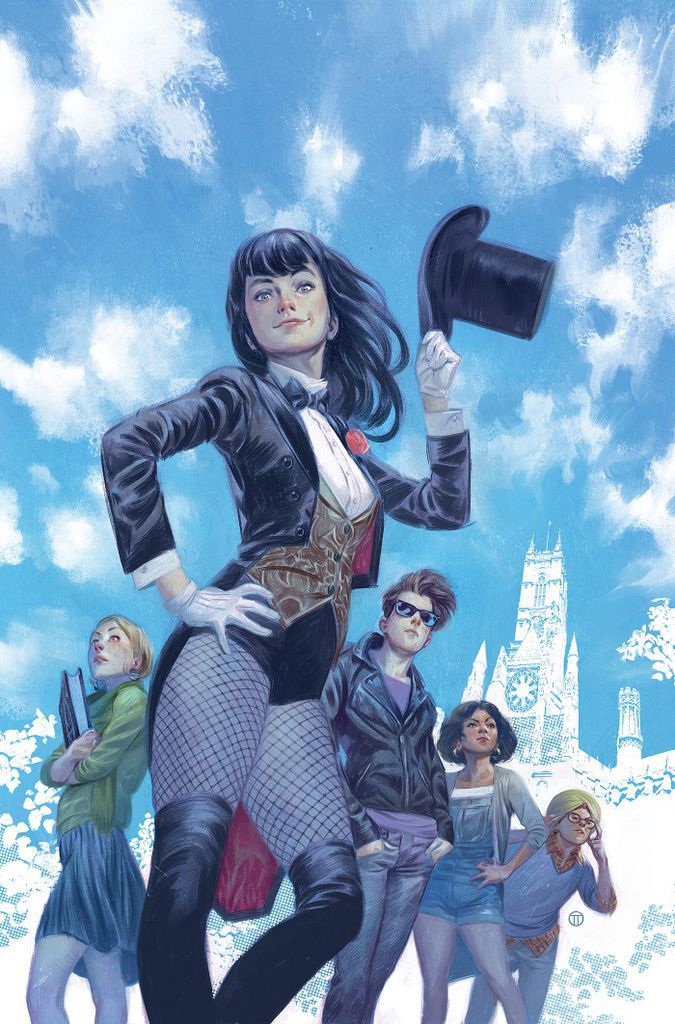 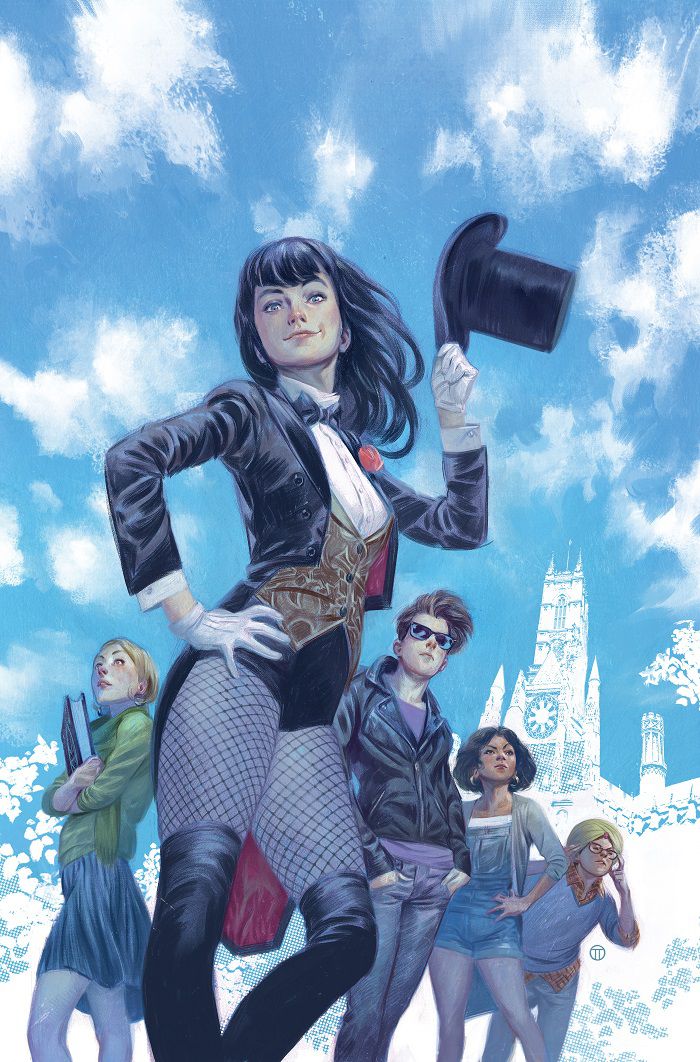 DC’s three episode mini-series, Mystik U, follows everyone’s favorite backwards talking spellcaster, Zatana Zatara, to an unexpected place: college. Sent back in time after a terrible accident, Zatana faces not only the lurking evil of demons but necromancers, mountains of classwork, and a crush that can only lead to trouble for all concerned…

I had the opportunity to speak to the fabulous Alisa Kwitney, series author, about keeping a character with a five and a half decade backstory fresh, the different sides of consent, and her magical inspirations. 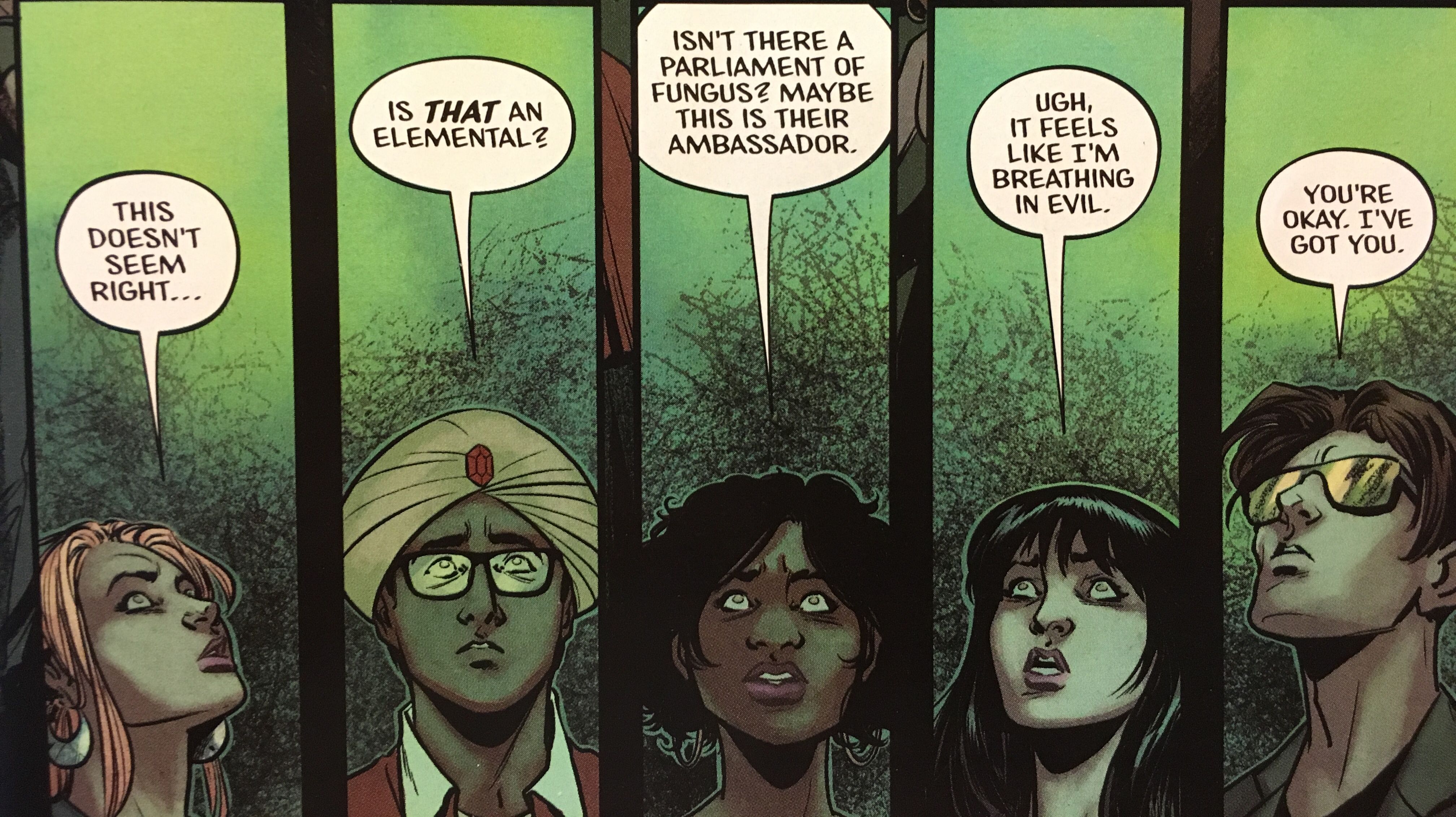 (There’s some paraphrasing. My recorder is a giant jerk)

BR: Zatana debuted in Hawkman #4 (1964). What are the advantages of building a story around a character with such a long and full history? Disadvantages?

AK: Whenever there’s a character with history, you have to simultaneously understand and totally forget it. When you inhabit a character who’s an archetype, you want to capture the essence but also write her as yourself. Every character you write is you. I like absurdity and fun and Zatana is temperamentally upbeat. Challenges can take an upbeat person down but they come back which is what happens with Zatana in Mystik U.

BR: What made you decide on a university setting for this journey into Zatana’s future?

AK: Technically, her past (ed note: totally her past). I was talking to Bobbie Chase and she said, “I was thinking about a book about LAARPing.” My first novel, Till the Fat Lady Sings, was about college as theatre. With my daughter being in college and my son just getting out, the ideas combined. And some of the essential things about college haven’t changed, especially the two modes of relationship: hook up or married for college. There’s also the unsettling feeling of knowing who you were and what you were good at, especially quirky things, quirky strengths and then you go to college and you meet more people with the same quirky knowledge but they knew more. Whatever you thought your special thing was, now there are other people who know more about it. It’s a pressure cooker. 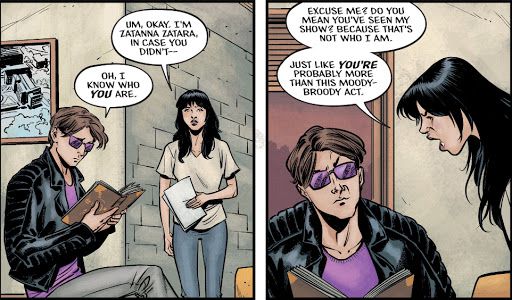 BR: Sebastian Faust is an interesting twist on the “bad boy” trope. Tell me about writing him from the “I don’t like being the bad boy” perspective.

AK: I was an English major who loved comics and romance, which was still “unseemly” and “shameful” in the 80s. Then, I went to Columbia grad school and a professor told me, “Never to condescend to your tastes.” And romance has some great tropes: one of them is the “double protagonist story.” Both members of the couple have their own arc and you follow both.

I also wanted to write Faust from the inside out. There’s a conflict because Zatana, and everyone else, sees him as a bad boy but he doesn’t think of himself that way. A lot of what he is was done to him and he has to live with it. This was a compassionate look at the bad boy and Faust was a good choice because there’s enough interesting about his history to integrate but not so much that I couldn’t reinvent him.

BR: We also see a reversal of the usual presentation of consent in this story: Pia chiding Zatana for continuing to pursue Sebastian after he’s give her several definite “nos.”

The problem is that Faust is saying “no” and you’re so busy going after what you want that you’re not hearing him.

This is most often the perspective we hear from women with men as the pursuers. Was there a particular motivation for reversing it here?

AK: I try to follow the story and the characters and explore relationships fully. I was thinking about another romance dynamic: the woman needing to convince the man. The man desires her but feels he can’t go after her for whatever reason; she’s the proactive one and the inverted power structure is fun to write, like the 30s screwball comedy structure. Think about what happens when we gender flip dramatic scenarios: if, in Titanic, Rose had insisted Jack be saved while she treaded water, people would have said, “This is not okay.” Why?

There’s also the fact comics are more visual: women have become more complex but they’re still more cheesecake in terms of costumes and poses. I really wanted Faust to be cheesecake with none of the women taking that role. As a team, Mike Norton, Jordie Bellaire, the editors, and I were all on the same wavelength.

I think we all know we have to prepare our daughters for college: drugs, alcohol… but we also need to counsel our sons because when they get into altered spaces, they’re not safe either. I think, as a humanist feminist, all genders need to take the shame out of sex. Then, they can experience that part of their life without feeling as though they need to be in altered states.

BR: It’s pretty clear from the small, fabulous nods you’re a Harry Potter fan. Is there anything else in particular you read or studied to prep for this project? Comics? Books? Any art you found particularly inspiring?

AK: Yes, though I think some of the similarities come with the territory. I was always more interested in Ron or even Neville or Luna, the person who isn’t excelling or who’s struggling to excel. People like me, who think sports are miserable and painful. No. Quidditch.

I went back and read Books of Magic, which I worked on. I love the glimpses of mythos, the Easter eggs, or as I like to call them, the Passover Afikomen gifts. The Faust comic, which was like a combination of Mad and House of Mystery. There was a short story in a horror anthology, Midnight Tales, by Nicola Cuti about a philosophical ooze creature and sorcerer philosophers – after my daughter told me about an experience in a co-ed bathroom and the gunk coming out of the drain. There’s a theory that you can make magic from toenails or hair and I had to use it. Think about what would be in a coed bathroom at a magical university.

BR: What is your favorite book? Or at least some influential ones?

AK: I can never answer the “favorite book” question. It’s the same reason I don’t have tattoos. I watched The Magicians, I’d also read the books, and there’s the weasel sex… ferrets…? Regardless, different circumstances in which people find a connection. My favorite books are like a phyllo pastry of things. Flavors of dark and light, though I find as things get more complex, they get darker and darker, which I don’t think is necessary. I want things that are more complex but not always darker and darker.

The Wonder Woman movie was captivating because it had some light. I like Rainbow Rowell’s books because the humor remains in the darkness. That’s why I like Edgar Wright as a director. I’m looking for the experience where humor doesn’t take away from the complexity and the darkness and then returns to the absurdity.

My father, Robert Sheckley, wrote before Douglas Adams in a similar style. The dark absurdity spoke to me. I loved Anne McCaffrey because she loved dragons the way people love dogs, that there could be animals who were your soul mate. I love social satire, like Flossie and Bossie, which is like Pride and Prejudice but with chickens and with an emphasis on female friendship.

BR: What’s next for you?

AK: The sequel to Cadaver and Queen, my feminist Frankenstein meets Gray’s Anatomy novel.  I have some ideas for the next arc of Mystik U, so we’ll see what happens with there. I also have some smaller comic projects coming up, one of them for Ahoy.