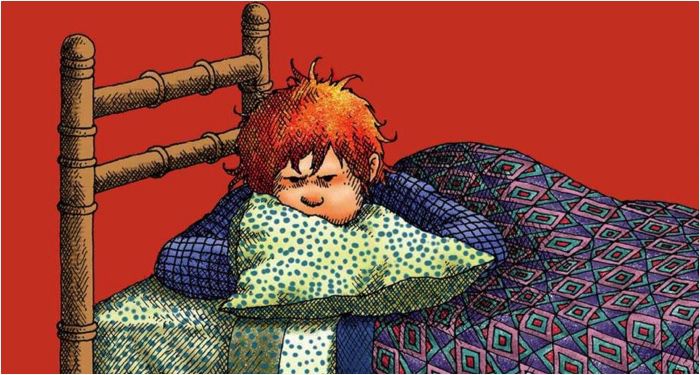 You know what one of my favorite children’s books of all time is? Alexander and the Terrible, Horrible, No Good, Very Bad Day. Because, man…let’s be real. Some days are like that. Even as adults.

Alexander’s day starts off on the wrong foot and, honestly, it doesn’t get better from there. And we’ve all had days like that. Days where it seemed like nothing can get better. Hell, my son had a day like that the other day. That actually was the inspiration for this article. But it’s still true.

In elementary school, this was a go-to comfort read when I was having a bad day. I’ve used this book to explain the concept of bad days to multiple kids over the years. I used it for my niece whenever she had a rough day when she was growing up. When my son went through these days in early elementary, he would pick either that book or How Do Dinosaurs Say I Love You? as a bedtime story. And I was perfectly okay with that. Do you know why? Because, again, some days are like that. And that book is a perfect example of it.

I would wager that some people forget that there are three other books about Alexander and the various challenges he faces. But this is the one that people remember the most. And I think it’s because it’s the one people can most relate to at any age.

Let’s go over what Alexander went through.

He woke up to gum in his hair. As someone who has had curly hair from practically the moment of birth, I would have been ready to set fire to the earth on that alone. Then, he tripped on his skateboard and got his sweater wet.

There were NO TOYS in his cereal box which, for a child of any decade where toys are included in the cereal box, can be devastating.

He was stuck in the middle in the back of a VOLKSWAGEN BEETLE. As someone who was always in the middle simply due to being the youngest in the car…I felt his pain.

Now, with regards to the invisible castle in art class…come on, Alexander. On that, I side with the teacher. At least draw a stick figure. Put some effort into it. And 16 is a very important number.

But…how can you sing TOO loud? Stop trying to quiet that joyful noise, Mrs. Dickens!

To get demoted in best friend status in elementary school was absolutely devastating. I’ve been through this pain, too, and it wrecked me. I would have rather been no one’s friend than their third best friend.

No dessert in my lunchbox? Mother…why have you forsaken me?

Do you know how much it would suck to be the only one out of your brothers with a cavity? After the betrayal of no desert in your lunch? Way to rub salt in that wound, universe.

Have you ever had an elevator door close on your foot? I mean, I haven’t. But I wouldn’t want to go through it.

He also got muddy after falling because his brother Anthony made him fall. And then when he finally had an emotional meltdown (which, kudos to him for it taking that long, because the elevator would have been it for me), having his other brother Nick call him a crybaby? Oh yeah brother of mine; you’re catching these hands.

Which is what he did. And then got yelled at by mom. And then he says he is having a terrible, horrible, no good very bad day, no one seemed to care or respond.

He didn’t get the sneakers he wanted, even though his brothers did. Come one. Who really wants plain white sneakers?

Now, at his dad’s office is where I have mixed feelings. Because, being a kid aside, how do you forget to not touch something literally seconds after being told not to? How do you accidentally call Australia (the place Alexander kept saying he wanted to move to)? But the elbow knocking something over…have you seen growing children? They’re like baby giraffes learning to walk. Their limbs just flail everywhere and sometimes they can’t help it.

He also had to deal with lima beans for dinner (fair) and kissing on TV. He misses me there. Sorry Alex; I write a whole newsletter dedicated to kissing.

Personally I don’t think baths can be too hot, but I detest getting soap in my eye. And losing a toy is heartbreaking no matter what. The pajamas…ehhh. I mean…no one is going to see you, really. I feel you’re stretching there, Alexander.

You can’t take back pillows, NICHOLAS!! And I would be sad if my night light burned out AND I bit my tongue. Truth be told, I bite my tongue at any point of the day and I’m ready to call it a wrap.

And then the cat didn’t want to sleep with him? *sad eyes*

So yeah. Alexander had a pretty crappy day. And it seemed no one understood his pain. That is why the last two lines are always what get to me.

“My mom says some days are like that. Even in Australia.”

It shows that, despite evidence to the contrary, his Mom hasn’t been completely oblivious to what has been happening to Alexander that day. She was honest with him while being sympathetic to the emotional gauntlet this day has been for him.

But those two lines resonate so much because it’s her way of saying, “Honey, everyone everywhere has days like this.” And I think it’s important because it shows children they’re not alone when they have a craptastic day. Everyone goes through them. And it’s okay.

I think a lot of times we forget children are just tiny adults. Hear me out on this. Adults know how to react in specific situations because life and other people have trained them how to respond. In the adult world, if Delores steals your dessert from the office fridge, you can’t throw your beverage at her. You have to go HR and file a complaint whereas in the kid world, chocolate milk and hands may be thrown.

Kids are kids and the emotions they go through are huge to them because they’re new. They’re not used to them and the varying degrees that they can come in. So they need grace. They need understanding. And they need the knowledge that just because you had a bad Tuesday doesn’t mean that you’re going to have a bad Wednesday.

I loved this book as a kid and I still love it as an adult. It’s so applicable no matter what and honestly, it’s a rare children’s book that is timeless. Because nothing in it denotes a specific time period. If I were a teacher or a children’s librarian, I would recommend this book to any child I could see having a bad day. It shows that there will be some days where nothing goes your way. There will be some days where you get along with nobody, even your siblings or the people who gave you life. It will feel like the entire world is conspiring against you.