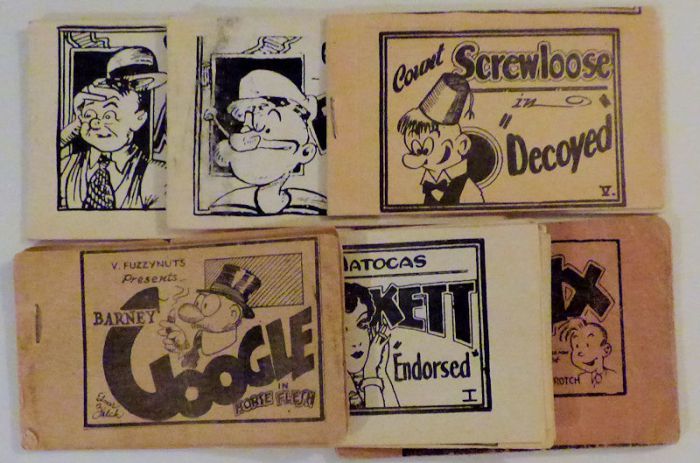 The United States in the early 20th century wasn’t a hub of sex positivity or education, but there were exceptions. People still loved sex and reading sexy things, even if it wasn’t acceptable in mainstream publications.

Enter the Tijuana Bible, an early relative of underground comics. These bibles were silly, and dirty, and fun. They featured obscene parodies of celebrities or well-known cartoon characters (including mice).

What are Tijuana Bibles?

Tijuana bibles were also called eight-pagers, Tillie-and-Mac books, blue-bibles, and two-by-fours. In short, they were eight-page dirty comic books, about the size of your wallet. They were created during the 1930s–50s, but they were most popular during the depression era. Millions of them were printed during the 1930s. It is estimated that between 700 and 1000 unique books were created. In the 1940s, the war ground the industry to a halt and it never recovered.

Most of the artists remain unknown because their publication was illegal. Dr. Donald Gilmore, one of the fathers of the study of the bibles, posited that 12 artists produced the bulk of these bibles. A few authors have been credited with making the bibles. Wesley Morse, creator of Bazooka Joe, had a hand in making some eight-pagers.

Tijuana bibles gained their name because of the myth that they were smuggled from Mexico. This was never proven to be true. The book covers claimed that they were printed all over the world. The actuality is that they never left America.

The comics were humorous and absolutely filthy. Some of the popular characters included in this are recognizable today. “Blondie”, “Dick Tracy”, and “Popeye” were all featured in these comics. Sometimes they would even feature political characters or celebrities.

The Popularity of the Bibles

The bibles were a form of escapism during the depression era. People delighted in the Tijuana bibles’ illicit content, but also in the hush-hush quality of buying something illegal.

They were also incredibly cheap. Tijuana bibles cost 25¢ each, and nobody really knows exactly who published them to this day. It is suspected to come from a group of printers that also circulated pornographic playing cards and film reels. Another theory is that they were printed by bootleggers. Bootleggers had access to printers for bottle labels, and they were often found in speakeasies.

Their popularity ended up sparking some conversations about copyright. Certainly, that was part of the appeal. Tabloids of the day capitalized on the controversy, with titles such as “Victimized By Smut!” Celebrities such as Rita Hayworth and Bob Hope appeared in these comics, and people went wild for them.

As well as serving as entertainment, this was a time in history when sex education was nonexistent. Another likely theory is that the bibles were partially instructional. Most of the stories and situations were silly, but the sex acts were very real. It was entirely plausible that these pamphlets served as a type of marital aid. It’s easy to imagine a husband saying to a wife “Think we can do this?” while Olive Oyl seduces Popeye.

Little else is known about these mysterious little comics. Almost nothing is known about how they came to be. Luckily, many of the comics survived to today for us to enjoy.

The rarity of the Tijuana bibles was part of what made them so influential. They are a predecessor to the underground comics movement and zines. Their style even influenced Playboy magazine.

While the bibles fell out of favour with the start of the Second World War, today they remain a popular collector’s item. Some universities have collections for educational purposes. It’s possible to find compilations of ridiculous dirty comics featuring Dagwood and Donald Duck. You know…if you want.