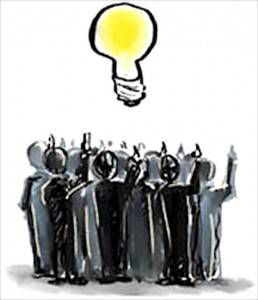 Samuel Johnson, in his grave, may be rolling over, applauding wildly, or both, at the news this week that UK-based Collins Dictionary will be opening up its word-selection process to…well, you, and me, and any other English-speaker on the planet who happens to have a working internet connection and a suggestion for a word that should “officially” enter the English lexicon (or, at least, Collins Online Dictionary). Your submissions (and mine) are being accepted now.

Why is Collins doing this? “Most dictionaries are static,” says Alex Brown, Head of Digital at HarperCollins in London, according to an official press release. “By allowing the public to truly participate, we’re ensuring that we stay on top of the evolving English language.”

If by “most dictionaries” he means the actual printed editions, than he is correct: that 20-volume set of the Oxford English Dictionary weighing down your shelves won’t have any more (or fewer) words in it tomorrow than it does today. But as a concept, all dictionaries—or rather, all dictionary publishers—more or less acknowledge their role as chroniclers of an evolving language, dating back to Johnson, who, failing in his original effort to stabilize the lexicon, came to admit that language can no more be fixed than “the image of a grove in a rainstorm.”

A cynic (who, me?) might wonder if Collins might just be doing this as a publicity ploy—perhaps trying to crack the various rankings of best online dictionaries or perhaps that Most Popular Dictionaries to Give as a Gift list, currently dominated by Merriam-Webster, Oxford, American Heritage, and even Scholastic—or at least to attract more potential buyers by getting them personally invested.

But overall, I’m inclined to believe that more words is never really a bad thing.

As of this writing, some 1,200 words have been submitted. Here are just some of the most recent:

Epic – “adjective to describe something as awesome”

Daves – “a pair of skimpy swimming trunks worn by men”

Wozwocked – “the strange feeling you have after a night of drinking, where you suspect that you may have done or said something inappropriate, whether or not you actually have done so”

The official rules explain that any word will have to prove its own worthiness to be included. Submissions that include information such as word origins, example sentences, and sizable amounts of overall uses will potentially stand a better chance of getting noticed by editors. For example, “wozwocked,” above, would have a lot more potential had its advocate included the genesis (which I suspect might have something to do with the behavior of a friend named Wozwock?).

Collins also claims that all new word candidates will be put through the typical vetting process before being accepted, but the publisher has already identified an initial list of likely contenders, including “creeping,” “cray,” “legbomb,” “yolo,” “mantyhose,” “superphone,” “sweatworking,” “Tebowing,” “tweeps,” and “twitlit.” (If you don’t know what any of those words means, just look it up—as soon as that becomes possible.)

So that only leaves one question: What word(s) would you add?