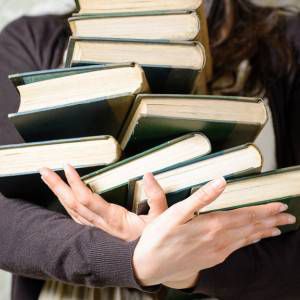 Virtue: I am a reader. Often I’m an insatiable one. Books have overtaken the passenger’s side of my bed. I have been known to reject the opportunity to converse with strangers in favor of delving into the book on hand.

…wait: did I just cross from “virtue” into “vice”? With readerly virtues, the line can sometimes become a blurry one.

Undeniably in “vice” territory, reader-wise: I can also be a terrible book snob. I turn up my nose at much that occupies the bestsellers list, and have been known to smirk when other readers remark upon the similarities between different novels from the same pulpy, overwrought writers.

Some of that snobbishness is without basis, though. I have a whole bookcase dedicated to what I once unthinkingly called, to a friend, my “lowbrow books”. Are those also the books I re-read regularly? Yes. I’ve read Dean Koontz’s Lightning probably a dozen times; some of my theology books only got the once-over. So. A purist I am not.

Having just entered into a period of reflection and repentance, I’d like to–wisely or not–confess to some such past errors in my reading judgment. (Koontz doesn’t count. Lightning is awesome, and I’ll defend that position to any English professor, no matter how leather-elbow-patched their wardrobe happens to be.)

I’m serving them up as an apologetic offering to every James Patterson reader I’ve ever turned my semi-hypocritical little nose up at. (Sorry.)

1) Left Behind. I read most of the series, non-ironically, on the way to English class during my freshman year of college. I was in a painfully earnest internally-evangelical phase, and did not immediately notice that Jenkins and LaHaye had produced an opportunistic, anti-Semitic, frequently offensive series of books.

I thought it was nice that the one Jewish character they bothered to elevate had found some meaning in Christian belief post-rapture. (It’s not. It’s erasure. I’m so mad at old me for not seeing that.) I thought it was interesting that they’d taken inspiration from a book of the Bible. And I definitely thought that the folks who looked at me sideways while I flipped pages on the bus were judging me for being a Christian, when everyone knows that colleges are bastions for liberal atheism, and not for my abominably crappy taste.

It took me eight books–really, EIGHT of those–to figure out that the looks were, in fact, about my abominably crappy taste.

2) Sean Hannity.  (God help me: this one is going to hurt.) Also freshman year of college: his was the first book signing I (attempted to) attend. The book was Let Freedom Ring, an anti-Democratic Party screed that blamed terrorism on Clinton and everything else on Hollywood. I’m pretty sure Hannity’s the one who taught me the term “lib***d”–which is ableist, and which, at this point in my life, I’m not even willing to type out fully in polite company–but I took notes on his pages, as if they were political gospel, anyway. I voted based on his “insights”.

I still have the notes–they’re good for a quick humbling, and as a reminder never to be so hideously gullible again–but have not trusted said writer since 2005.

3) Ann Coulter. Maybe a number of confessions rolled into one (reading related self-flagellation is perhaps not super new to me). After I woke up to the reality that Hannity is a not very nice partisan pundit, and that his work should not, in fact, be treated like gospel: I decided to self-punish by re-immersing myself in a similar book (Let Freedom Ring having become, itself, untenable territory).

It was meant to be an unflinching act of self-reflection.

I lost courage. I had a cocktail first. (Two? Who knows.)

Turns out: even with my senses terribly dimmed, Ann’s work is offensive (the book got thrown against a wall 10 pages in) and illogical (the lesser reason behind the throwing).

4) Violence against other people’s books. A friend lent me her favorite novel, preparing my way with rave, starry-eyed reviews. I found the prose purple. I found the ending ridiculous. Without thinking: I threw her book against the wall. I returned it with spine damage. It seemed like bad haircut territory, though–I’m sure she grew out of him?–so I also lied about liking it.

5) Prejudice against other people’s books. I have very, very strong negative opinions about Fifty Shades of Grey.

I have not read Fifty Shades of Grey.

I have no intention of reading Fifty Shades of Grey. (Listen: I played that game so I could continue trash-talking Twilight credibly, and I got burnt. Partially by discovering that, by the end, the books really aren’t that awful.)

I fully intend to keep bashing Fifty Shades of Grey.

6) I have been known to write variations of “are you f***ing kidding me?!” in the margins of books whose ideas–or grammatical tendencies–I disagree with. Because such books obviously aren’t up for a re-read: I then donate them, peppered with profanities though they may be.

Actually: that’s kind of a sorry-not-sorry situation. (Punctuation marks have proper uses, tense is important, and no one likes a malapropper.*)
___

So. There you have it, folks. I have judged the books that others read, though clearly the books I read sometimes invite judgment. I have been not nice to the physical copies of books that I have hastily judged. I have been guilty, let the record reflect, of an RUI. And I just intentionally wrote “malapropper”, which is, ironically, not a word.

Don’t leave a fellow reader out here confessing alone, though!: do you have any past reads, or reading behaviors, that you think cross into vice territory?