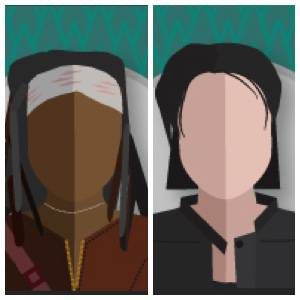 This is a guest post from Emily Hughes. Emily talks about books on the internet, both professionally for Penguin Random House and for fun everywhere else. She’s the founding editor of Proof Reading Books, a blog of book and booze pairings. You can find her doing research most weekends in Brooklyn. For more book talk, pop culture musings, and bad puns, find her @emilyhughes.

Suvudu’s annual Cage Match competition is a deeply nerdy celebration of some of the very best characters in science fiction and fantasy, both classic and contemporary. This year we decided to feature an all-female line-up of our favorite literary ladies. There are some big names, of course — Bellatrix Lestrange, Melisandre, Johanna Mason, Lyra, Death, Tris — but quite a few characters who, undeservedly, tend to fly under the radar. I’ve highlighted a few of my personal favorites here, and be sure to keep an eye out starting March 2nd to see who our authors think have what it takes to reign supreme.

Alanna of Trebond (Tamora Pierce’s Song of the Lioness quartet)

Many Rioters probably know Tamora Pierce’s Song of the Lioness quartet, a feminist YA series before we knew from feminist YA series. But to my mind, Alanna’s due for a resurgence. She takes her destiny entirely into her own hands, disguises herself as a boy to become a page and then a knight, and works hard to become the best. She’s sexually empowered (she has sex, for pleasure, when she’s ready and because she wants to, and — get this — nothing bad happens to her as a result). She’s confronted with sexist attacks, accusations of trickery and sleeping her way to the top, and systematic discrimination, and yet never wavers. A role model for the ages.

Those of us who had a musical theater phase growing up still remember every word to the Original Broadway Cast recording, but the Broadway show, wonderful as it is, doesn’t hold a pail of water to Gregory Maguire’s book. The Elphaba of the page is a vengeful, emotional, flawed outcast-turned-revolutionary-turned-Wicked Witch. But her wickedness is revealed to be more a function of being misunderstood and reviled by an essentially totalitarian society than of any inherent malice, and Elphaba remains a singular, memorable character.

She may not wield a sword or cast spells, but in terms of sheer will and self-determination, Cimorene’s about as badass as they come. Tired of being told that all her interests aren’t proper for princesses, and faced with the prospect of an arranged marriage to a particularly irritating prince, Cimorene nopes directly out of her sheltered life in the castle, finds herself a dragon, and volunteers to become her “captive” princess. In this case, though, “captive” means that Cimorene lives her ideal life as cook and librarian to the dragons, with the occasional interruptions of a prince or wizard who wants to throw a wrench into the works. Never one to be caught without her wits about her, Cimorene is the perfect reminder that a strong female character doesn’t have to be cast in a typically masculine mold.

Fine, yes, you probably know Michonne from the wildly successful television adaptation, but I dare you to show me a more resourceful, badass, deeply human character. You think you’d have the presence of mind to cut off the arms and lower jaws of your zombie boyfriend and his best friend so you can use them as walking zombie apocalypse camouflage? Yeah, no. Kirkman himself has named her the strongest character in the series, and her struggle to readjust to some semblance of normality and maintain close relationships is about as real as it gets in zombie lit. All hail the queen.

Alice Quinn’s journey from painfully shy magical prodigy to virtually all-powerful, amoral demon to deeply pissed off, revived-against-her-will human is a beautiful thing to witness. After the obscenely self-centered Quentin casts a spell to bring Alice back to the world of the living, she delivers a chewing-out out for the ages, accusing him of robbing her of her immortality and her happiness. Other merits of the series aside, it’s worth reading for that moment alone. Besides, niffin-Alice is a scary and scary-great villain.

The Doctor Who novels and audioplays are a vastly underappreciated source of escapism for those of us who’re looking for a fix in between TV seasons, and they come with their own great set of companions who’ve never once appeared on screen. Take, for instance, perennial fan favorite Bernice Summerfield, a companion of the Seventh and Eighth Doctors and an archaeologist before River Song was ever even a twinkle in Rory Williams’s eye (er, spoilers?). Benny, as she’s known, appeared in dozens of books (including a spinoff series of which she was the protagonist), facing off against innumerable Classic Who villains both with and without the Doctor, ultimately saving the universe many times over, and becoming known in certain alien cultures as a minor goddess of inebriation.

And if all that still doesn’t convince you, then maybe the fact that she was modeled on Emma Thompson will.

She has psychic powers and is telepathically bonded with a time-traveling dragon queen. Case closed.