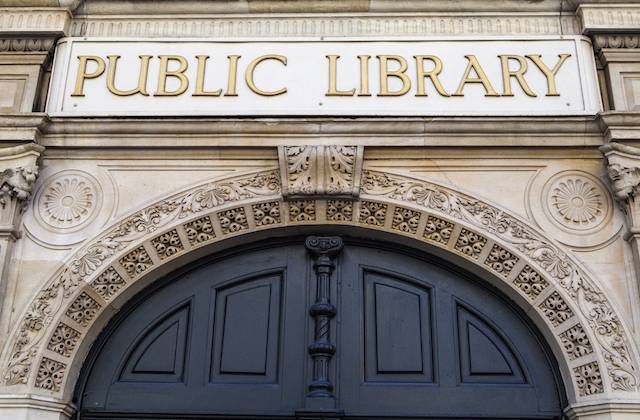 Let’s face it – being a comics fan can get expensive. Whether it’s your pull list, convention tickets, or cosplay materials, there’s always going to be something tugging on your purse strings. And when things get tight, comics are often the first thing to go – when you’re having to decide between buying groceries and paying rent, it can feel impossible to stay a part of the comics world. It’s a feeling I know well: I recently moved to London, a city with a fantastic comics scene, but also nearly the highest cost of living in the world. Luckily, I’ve spent years perfecting the art of keeping up with comics on the cheap; here are my six top tips to keep reading when your bank account’s running on empty:

Check Out Your Local Library

Without my hometown’s public libraries, I wouldn’t be reading comics today. As a broke teen, I devoured their eclectic collection of trades, carrying home rucksacks full of books until I’d read through everything they had – even with their habit of losing the first volume of half their series. When I moved away for university, however, I found my new local library rather lacking in comics. If that’s also the case for you, don’t despair; many libraries have systems in place for patrons to request books, or you can chat to your librarian(s). On the other end of the scale, you might be lucky enough to be a member of a library that’s part of Comics Plus, which gives you access to thousands of digital comics, including series from top publishers like Dark Horse, BOOM! and IDW – in which case, you’ve pretty much hit the jackpot.

While switching your regular pull list to digital probably isn’t going to save you much, there are bargains galore to be found elsewhere. If you love to read single issues, traditional publishers will typically price their Digital First comics (like DC’s Bombshells) lower than the rest of their line; all-digital publisher Monkeybrain, meanwhile, sells almost all their issues at 99¢/69p. Humble’s Book Bundles often contain heaps of comics at pay-what-you-want prices, with themes ranging from LGBTQ comics to Buffy the Vampire Slayer, while Comixology features regular sales and money-saving bundles on lots of series. And for those in the U.S., Comixology also recently launched its own subscription service to rival Marvel Unlimited; opinions are divided over whether it represents good value or not, but if you like the idea of having access to a large range of comics for a flat monthly fee, you might want to check one or the other out.

A few years ago, you would have been hard-pressed to find comic books and graphic novels in most places where pre-owned books are sold; as comic books have gained an ever-increasing foothold in bookshops, however, so have they found a place in second-hand bookshops. It may take some determination to dig through the back-issues of comics with names like Gunblood from publishers that collapsed sometime around 1997, but you might just find a gem. Having volunteered in multiple charity bookshops in my time, I have one top tip: make sure to check through the children’s section. Even these days, the idea that comics are for kids still persists, and some shops can end up stocking all comics in the children’s section – no matter how inappropriate that might be (shout out to the poor soul who decided that All Star Batman and Robin, the Boy Wonder belonged in the kid’s section of my local Oxfam).

Digital comics may be mighty convenient, but they’re not great for sharing. Luckily, being a comics fans often means amassing longboxes and bookshelves full of comics – even if you don’t mean to. If you’re lucky enough to have some nearby friends who are also into comics, why not take advantage of this and arrange a swap meet? If they’re also feeling the financial pinch, you could even set up a buying club: work out what comics you all buy regularly, and arrange for each of you to buy one series and share it with everyone else.

Get To Know Your Friendly Local Comic Creators

One of the best things about the explosion in the number of comic conventions and festivals over the last few years is that it’s easier than ever to be plugged into your local comics scene. Local comic-cons, zine fairs, indie comic book shops and comic art festivals are a great way to pick up low cost comics from underground creators. Keep an eye out for minis and zines, which cost creators less to produce, so they can sell them for less. If you don’t have much of a scene near you, many small creators sell their work on Etsy, Big Cartel and Gumroad – though be sure to keep an eye on shipping costs.

Webcomics Are Your Friend

Find a long-running webcomic that you like the look of, and a good, old-fashioned archive binge can you keep you reading for weeks without paying a penny. But when there are so many comics out there, how do you find one you’ll enjoy? First off, have a scroll through our webcomics category and see if anything catches your eye. Look through the social media of a creator whose work you already like – they’ll often recommend similar stuff. I’ve found a lot of my favourite webcomics through checking out recent nominees in the online categories at awards like the Eisners or Harveys. Just remember that while most webcomics might be free for you to read, they aren’t free to produce; make sure to turn off your adblocker and support the creators where you can.

Do you have any tips for keeping up with comics without breaking the bank? Let us know in the comments.