So here’s the thing: I’ve read every Pulitzer Prize-winning work of fiction. I don’t know why I did this to myself. That’s a lie, I know why but it’s not interesting and you’ve got better things to do than read about that time I got trapped in my aunt’s house for three days and had to fake being sick to get out of watching people buy pies.

I did it though – 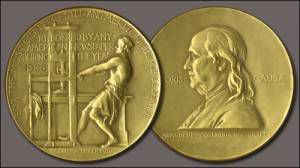 I’ve read every work of fiction the Pulitzer committee deemed worthy of the Pulitzer and while I don’t completely regret the experience, there are a few things you should know if you’re considering it.

1. You don’t want to read them in order

I know, I know – it’s tempting to start with the 1918 winner, His Family by Ernest Poole, and continue on through the years until you’re done, but this is a mistake. A huge mistake! Why? Because war! The Pulitzer committee seems to really, really want people to know about wars! If you read them in order, you’ll end up reading eight books in a row about World War I, and then World War II, and then you’ll notice there are a handful of books in a row on the Great Depression, or that whole decade where every book that won was basically just hundreds of pages of rich white people lamenting how boring their lives were.

2. Cycle the Pulitzers into your regular reading schedule

Through the first dozen or so books, I decided I was going to focus on Pulitzers and only Pulitzers. It was my big project! It was so exciting! Yeah, that didn’t work either. The thing is that some of the winners are really good, page-turning, amazing books, but a lot of them have that really gross Big Important Book thing going on, where the author needs – NEEDS – to describe how women’s gloves are made for a dozen or more pages (I’m looking at you, Roth). And they get boring! And tedious! I got so caught up in “Pulitzers must be the only words that my eyes go over!” that I ended up on an unplanned reading hiatus. Then I wised up and decided to rotate books. Yes, it took me longer – years longer – than if I’d just read them all back to back, but those years were much more enjoyable than if I’d insisted on only-ladies-gloves books.

3. There’s just no way around a TON of problematic things

Look, you’re a Book Riot reader, you’re smart, you’re wise, you know about problematic things and you’re going into this challenge ready to face them head on. At least, I hope you are – because there’s a lot of it. Though it’s gotten somewhat better in recent years, the old school Pulitzer winners were SUPER WHITE and way more than half of them were men. You’re gonna be reading some awful, not-okay language, a lot of unchecked racism, and wholes and bunches of non-consensual sexual encounters, most of which are presented as A-OK. This reason alone is enough for me to strongly discourage you from reading all the Pulitzers but if you feel you must, well, just know what you’re getting into.

John Updike won the Pulitzer Prize for Fiction for two of his four Rabbit series books so that one was pretty easy; if I gotta read half of them anyway, I may as well read all four. And while I do find Updike in general, or really, the idea of Updike, to be pretty objectionable, these books really tickled my tickle bone. But what about a series where only one book won? And what if it’s a series that’s been out of print forever? And what if the author is a guy named Thomas Sigismund Stribling who sounds super white and boring and he names his books things like The Forge and The Store? I did read that trilogy and I don’t regret it but I wouldn’t recommend it to a friend.

5. It can get pretty damn expensive

You’d think if a book had won the Pulitzer it would still be in print, or that it was at least popular enough that there are used copies floating around. Or maybe you’re smarter than me and know that to be untrue, in which case: congrats! You win and my bank account lost big time. Some of these books were $$$$.

Allow me to pretend that I knew that DNF meant “do not finish” well before Book Riot decided to let me write things to y’all, and then let’s talk about how I should have had a DNF policy before I got started. Yes, I wanted to finish this challenge in its entirety but if you can read all 640+ pages of the total snoozefest Guard of Honor, or if you can handle In This Our Life, which I disliked so much that I couldn’t hold back in my Goodreads review and then this lady said, “Hello don’t call any book “shit” please!!!” or if you can keep reading a book after the protagonist describes the process of smelling her son’s “heavy underwear” before he goes off to war, well, you’re more committed to the cause than I am. I DNF’ed a handful and I don’t feel a lick of shame about it.