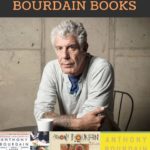 It wasn’t until after Anthony Bourdain died by suicide that I began to experience his work. My husband and I spent every night watching episodes of Parts Unknown, becoming inspired to try out new-to-us cuisine, including discovering a deep love for Ethiopian food. Though we haven’t finished the show—it will feel really resolute to do so, so we’re holding off, especially as his pain becomes quite palpable the further the show proceeds—it then led me to picking up Anthony Bourdain books.

I’d purchased a number of Anthony Bourdain books for family over the years, but never had paged through them myself. And now, looking back, I’m glad for it because my first experience reading Bourdain’s words came not on the page, but through audio. There is something so special about hearing a writer perform their own audiobook, and this goes doubly so for someone like Bourdain, whose literal voice helped shape his career.

Anthony Bourdain books span a wide range of topics, and he dipped his writing hand into both fiction and nonfiction, narrative and instructive. In addition to writing, he had his own imprint at Harper, Anthony Bourdain Books, which ceased operation after his death. There he published a wide range of books that mirrored the kinds of books he himself wrote: memoirs and culinary journeys, as well as novels. Bourdain hand-selected these books and the writers.

Whether or not you’re a foodie, chances are that there’s still a book within Bourdain’s catalog that will ignite curiosity. Here’s a look at some of his books. This is no comprehensive guide but rather a celebration and exploration of some of the legacy he left for readers who love food, travel, and a good yarn or two. 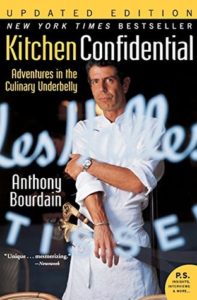 Likely the most recognizable and most popular of Anthony Bourdain’s books, this is one to pick up on audio over print, even though the audiobook is riddled with technical issues. Bourdain’s voice brings to life this memoir of working in a variety of kitchens in and out of New York City and coming of age with little money, long hours, shady restaurants, and a whole host of readily accessible drugs and alcohol. The book is by turns funny and shocking, and it’s certainly not for the faint of heart. It’ll change the way you think about dining out, as well as make clear to you that the only must-have tool in your own kitchen is a single sharp knife.

This is not a book about how cooking is an art. It’s about the darker side of kitchen life, and it absolutely showcases Bourdain’s own biases and youthful immaturity as he came into himself. 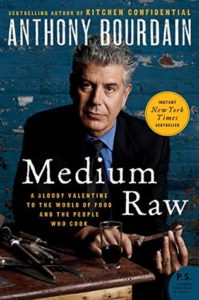 Medium Raw: A Bloody Valentine to the World of Food and The People Who Cook

This is another one to experience in audio, particularly if you want to listen to Bourdain’s voice. But in no way is it as strong or compelling as Kitchen Confidential, and despite how much Bourdain is open to other cultures and experiences, this book opens up some of the uglier sides of his mind, particularly when it comes to fat people. There are some cringe-worthy moments of judging other people based on their bodies that are hard to ignore.

That said, like Kitchen Confidential, this book is about the underground of the culinary world but it looks at Bourdain’s understanding of the changes that have occurred both in his life and in the more global food world since that book. It shifts back and forth, from the past to the present, and shines a light on the positive—and not-so-positive—ways things have changed. 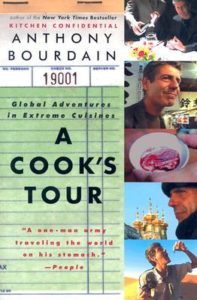 This is the next one up on my to-read list, and I so wish it were available in digital audio (it can be found on audio CD and I’m giving real thought to uncovering my old boombox and tracking it down at a library). The driving force of this food and travel memoir is the question of what makes for the perfect meal. Bourdain seeks to find an answer by traveling the world and poking at the question of what “perfection” is when it comes to a meal.

A fourth memoir/travel read worth looking for from Bourdain is The Nasty Bits.

It’s also worth mentioning here that Bourdain wrote a nonfiction book about Typhoid Mary and her life. Pick up Typhoid Mary: An Urban Historical to see Bourdain’s chops at biography.

For those who practice vegetarianism or veganism (no slights or belittling there!), be aware that Bourdain is a no-holds-barred eater and cook, meaning that his recipes feature meat, animal products, and—what I think is refreshing in an era of too many manufactured foods—lots of natural fats and oils. 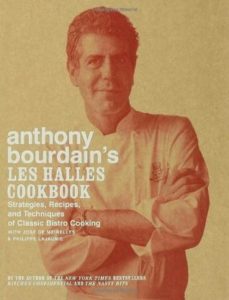 Want to learn how to make outstanding French cuisine? Then this is where you’ll want to begin. Like Bourdain himself, though, there’s nothing fancy nor ultra-refined and precise about his cookbook. It’s funny and raw, and it makes what can be a tough style of cooking to master one that’s approachable, fun, and accessible to the everyday home cooked. The down-to-Earth recipes are inspired by his time working for New York’s Les Halles. 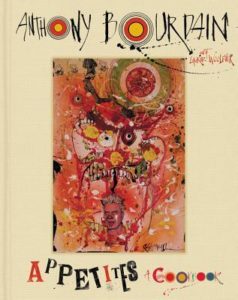 Published after he found success doing Parts Unknown, Bourdain compiled this cookbook filled with his favorite recipes. These are foods that Bourdain believes everyone “should” be able to cook, meaning that while they’ll offer up a host of spectacular meals for eaters, they’ll also be accessible enough to the everyday home cook.

It should come as no surprise that Bourdain contributed to a host of other cookbooks, both in writing introductions and chapter for inclusion. He might be best known here for taking part in the Hungry Ghosts series, which a horror anthology filled with recipes and ghostly tales, inspired by Japanese legends.

When not cooking, globetrotting, or documenting either of those, Bourdain put his skills to the test writing novels as well. These mysteries have the flavor of his experiences in the culinary world, too. 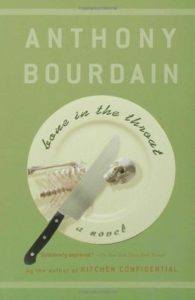 Bone In The Throat

This is Bourdain’s first novel, and it’s a story that the publisher lauds as “a wildly funny, irreverent tale of murder, mayhem, and the mob.” The story is a Mafia caper and follows a young chef working in his uncle’s unglamorous restaurant who happens to get caught up as a partner in a crime. The kitchen the young man works in? Well. It’s now the scene of a murder. 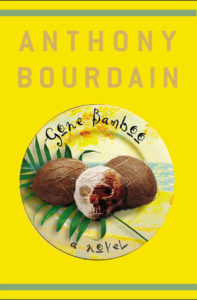 Another crime caper, laced with humor and murder. This novel follows an ex-CIA agent hoping to settle down and retire with his wife when suddenly, an investigation he botched haunts him. This one boasts “murder, hitmen, and the hitwomen they love.” 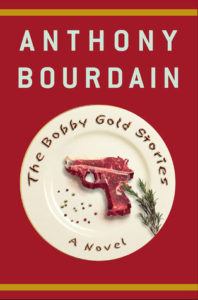 After Bourdain’s runaway success with Kitchen Confidential, he came back with this novel about a lovable criminal who, after spending a decade in prison, doesn’t even pretend he’s going to get his life together once he’s released. He knows he’s good at doing the dirty work of the big guys and despite being good-hearted, he continues to get himself into the thick of things. This one’s modeled after F. Scott Fitzgerald’s “Pat Hobby” stories.

Did you know Anthony Bourdain also wrote comics? You’ll want to seek out Get Jiro, as well as Get Jiro: Blood and Sushi, written with Joel Rose and illustrated by Alé Garza.

To neatly round out this look at the literary life of Anthony Bourdain, here is a list of the books he published under his eponymous imprint. Note that this is a heavily male list, likely because of how the industry itself elevates male voices. It is, however, a refreshingly inclusive and global list.

If you want even more food, travel, and the cutting humor and insight of Bourdain, you’ll want to dig into these outstanding Anthony Bourdain quotes.