The consequences of fat shaming are horrendous. This is true for everyone, but it can be especially true for teens.

Unfortunately, it’s often not regarded as a “real” bullying issue, primarily because of the ridiculous claim that it will help the person being bullied lose weight. We know this isn’t true, as we know the person doing the bullying has no good intention at heart.

At the University of Surrey here in the UK, professor Jane Ogden writes that all of the evidence points to the fact that fat-shaming only makes people feel worse. It increases depression, anxiety and leads to self-destructive behaviour.

A study by scientists at University College in London found that fat shaming actually leads to people putting on more weight.

This is in response to a recent broadcast where a popular U.S. talk show host delivered a plea for fat shaming to come back. People who fat shame others aren’t doing it from a place of empathy; they are doing it for the sole purpose to make others feel horrible.

Finding books that tackle these tough subjects are difficult to find. Finding ones that tackle them the right way can be even trickier. That’s why I was very excited to read two excellent novels recently that covered fat shaming in a way that is smart, respectful and of course super engaging. 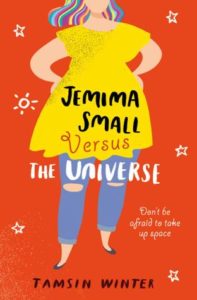 In the brilliant novel Jemima Small Versus The Universe by Tamsin Winter, Jemima is forced to join the school’s health club, which everyone calls “Fat Club.” Although Jemima does find a true mentor in the club, when word spreads around the school that she’s been enrolled, the bullies only turn the notch up as high as they can in regards to their bullying.

The emotional pain that Jemima endures threatens her ability to live the life that she wants, it’s a truly emotional and stunning read that I highly recommend.

In fact, a recent ad campaign by Cancer Research UK was wildly panned as fanning the flames of weight stigma.

In fact, high school students who think they are overweight are more likely to attempt suicide.

This is a major problem that combines several complex environmental factors and can have a devastating impact on people’s mental health, especially teens, many of whom are already struggling with feelings of isolation, depression, anxiety, and stress. 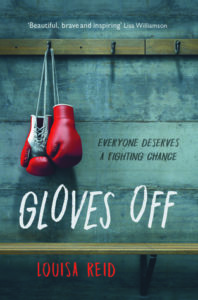 There are other forces at play here as well. For instance, in the brilliant novel Gloves Off by Louis Reid, protagonist Lily and her family can’t afford to eat healthy. In the UK, 3.7 million children live in households that earn less than £15,860 ($20,603 USD) per year. This means they are unable to afford the diet recommend by the government in order to remain healthy.

In the novel, Lily lives in a perpetual nightmare. She is bullied in and out of school. The bullies take photos of her, physically attack her, and call her names like piggy and fatty. There appears to be no escape from the ridicule she endures, and at first Lily appears to accept the fact that her life is going to be miserable and there’s nothing she can do about it.

She eventually decides to join a boxing gym where she finds solace, friends, and hope.

As a school librarian, my job is to provide a safe welcoming space for everyone. It’s also my job to put books into the hands of teens that reflect as many different backgrounds, races and experiences as possible. That’s why, when books like Gloves Off and Jemima Small Versus the Universe comes along, I get as many people reading them as I can.

Sign up for What's Up In YA? to receive all things young adult literature.
Thank you for signing up! Keep an eye on your inbox.
By signing up you agree to our Terms of Service
#Young Adult Literature#fat shaming#ya novel