To coax the Very Hungry Caterpillar into tasting the unfamiliar, we might want to read him a few stories featuring delectable dishes from around the world. (This might work with any picky eaters at home too!) These 10 books will definitely get him drooling and ready to eat: 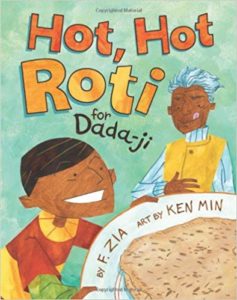 Aneel’s dada-ji (grandfather) is full of wild and fantastical tales, and in one of them, he describes eating fluffy puffy roti. The scrumptious Indian flatbread not only sounds delicious, but apparently, it gave dada-ji tiger-like power. Aneel wants his dada-ji’s power to return, so he decides to make some roti of his own. Will Aneel’s homemade roti give dada-ji his former strength? 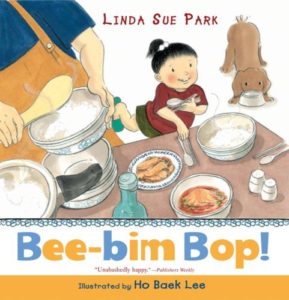 This lively book follows a small girl and her mother as they prepare to cook the girl’s favorite meal: Korean bee-bim bop, rice topped with a mix of meat and veggies. The colorful illustrations and driving rhyming text will have readers shouting for their own bowl of bee-bim bop. 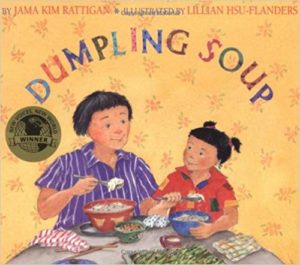 It’s tradition for Marisa and her family to celebrate the New Year in their Hawaiian home with a large batch of delectable dumplings. This year, Marisa is seven and has been invited to help with the cooking, but she’s worried her dumplings won’t be good enough. Will her family enjoy her lumpy contribution to the New Year’s feast? 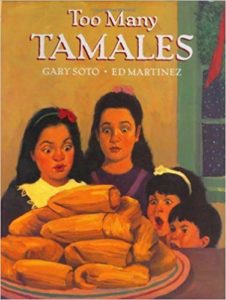 Too Many Tamales by Gary Soto

It’s Christmas time and for Maria’s family that means making mountains of tamales. When Maria’s mom takes her wedding ring off while cooking, Maria can’t resist trying it on. Only later, once the tamales are all cooked and ready to eat, does she realize the ring is missing. It must be in one of the tamales! Maria and her cousins take it upon themselves to find the ring by eating every last tamale, but in a twist ending, they see their efforts were unnecessary. 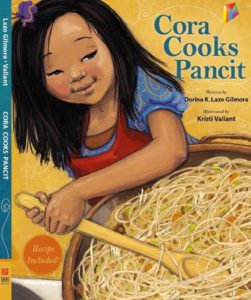 Cora loves being in the kitchen with her Filipino family, but being the youngest means she only gets to do “kid jobs.” Lucky for her, when her siblings are out for the day, Cora gets to be her mom’s sous chef as they make her favorite noodle dish, pancit. 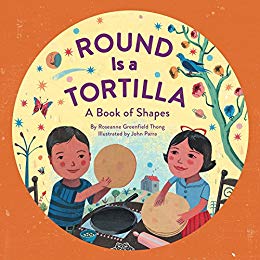 Round Is a Tortilla by Roseanne Greenfield Thong

From triangular slices of watermelon to round tortillas, Thong introduces shapes and Latino culture in this rhyming concept book. Not all the shapes in the book are foods, but there are enough to make you mighty hungry for a tasty treat. 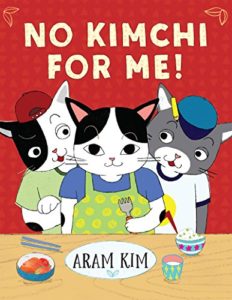 No Kimchi for Me by Aram Kim

Yoomi can’t stand kimchi, the Korean fermented spicy cabbage everyone in her family loves to eat. But when her older brothers call her a baby for not eating it, she is determined to find a way to make it palatable. She tries it on pizza, ice cream, and other foods with no success, but Yoomi is in luck. Her grandma swoops in to save the day with a super yummy kimchi pancake dish. 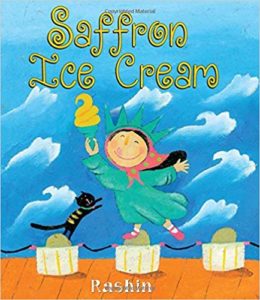 Iranian immigrant Rashin is thrilled to be going to her first American beach. As she and her family trek from Brooklyn to Coney Island, she fondly remembers past trips to the the Caspian Sea. Eating saffron ice cream at the beach in Iran was always a highlight, so Rashin is sad when the flavor isn’t available on this beach visit. But when a girl she meets on Coney Island introduces her to chocolate crunch, Rashin’s disappointment lifts and she makes a new friend. 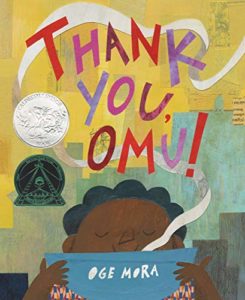 Thank You, Omu by Oge Mora

Omu makes a delicious Nigerian stew with an aroma so irresistible her neighbors can’t help but follow their noses to her doorstep. From a little boy to a doctor to even the mayor, the members of the community all come to Omu for a taste of her amazing dish. She is happy to share and is so generous that when dinnertime rolls around, there isn’t any stew left for her! Thankfully, her neighbors all come back with food in hand and make a beautiful meal for Omu to enjoy. 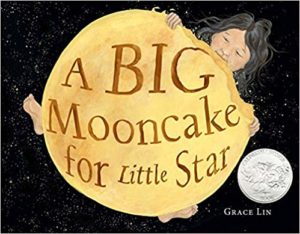 A Big Mooncake for Little Star by Grace Lin

When Little Star and Mama bake a big mooncake and set it onto the “night sky to cool,” Mama warns her not to eat any of it. Initially, Little Star doesn’t succumb to temptation, but when she wakes up in the middle of the night, she can’t help but take a nibble. Her snacking continues every following night and, like the moon in the night sky, the mooncake gets smaller and smaller over the course of a month until it is completely gone! Mama’s a good sport, though, and bakes a new one.

Do you have yummy books to recommend that would help the Very Hungry Caterpillar broaden his taste in foods? Please share in the comments!