Katherine Dunn’s polarizing 1989 novel Geek Love, which was nominated for the National Book Award, tells the story of an unconventional family. Parents Al and Lil Binewski deliberately genetically engineer their children to have rare disabilities and mutations, creating a family of circus “freaks.” They include the narrator Olympia, who has albinism and dwarfism, conjoined twins Elly and Iphy, and Chick, with no visible disabilities but telepathic powers. Their brother Arty, born with flippers, becomes a cult leader. The family’s bonds are often fraught and complicated but remain close. 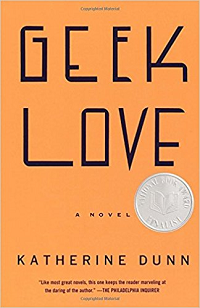 Several directors have expressed interest in movie adaptations over the years. However, this book might be almost impossible to film or best left to readers’ imaginations.

For many readers, the subject matter is too controversial, bizarre, and shocking. The Binewskis use words to describe themselves that would be considered ableist today, but that’s the point: they’re reclaiming them and taking pride in their identities. This book reverses the typical non-disabled gaze, forcing us to see the circus performers from their own perspectives, not the spectators’. As a disabled teenager, it was one of the only books I’d read where most of the characters have disabilities. It forces readers to question the assumptions that non-disabled people are “normal” and that disabilities are negative and deviate from the norm.

I can understand why some people would consider it voyeuristic, but Geek Love provides no easy answers, only raising complex issues. Below are some of my favorite Geek Love quotes about the effects of ableism and taking pride in one’s differences. The book explores complex ideas: for example, that young children can have existential crises long before they can articulate them. Dunn refused to talk down to her readers.

“These are written by norms to scare norms. And do you know what the monsters and demons and rancid spirits are? Us, that’s what. You and me. We are the things that come to the norms in nightmares. The thing that lurks in the bell tower and bites out the throats of the choirboys—that’s you, Oly. And the thing in the closet that makes the babies scream in the dark before it sucks their last breath—that’s me. And the rustling in the brush and the strange piping cries that chill the spine on a deserted road at twilight—that’s the twins singing practice scales while they look for berries.”

“Don’t shake your head at me! These books teach me a lot. They don’t scare me because they’re about me.”

“We have this advantage, that the norms expect us to be wise. Even a rats-ass dwarf jester got credit for terrible canniness disguised in his foolery. Freaks are like owls, mythed into blinking, bloodless objectivity. The norms figure our contact with their brand of life is shaky. They see us as cut off from temptation and pettiness. Even our hate is grand by their feeble lights. And the more deformed we are, the higher our supposed sanctity.”

“Can you be happy with the movies, and the ads, and the clothes in the stores, and the doctors, and the eyes as you walk down the street all telling you there is something wrong with you? No. You cannot be happy. Because, you poor darling baby, you believe them.”

“I get glimpses of the horror of normalcy. Each of these innocents on the street is engulfed by a terror of their own ordinariness. They would do anything to be unique.”

“There are those who feel their own strangeness and are terrified by it. They struggle toward normalcy. They suffer to exactly that degree that they are unable to appear normal to others, or to convince themselves that their aberration does not exist. These are true freaks, who appear, almost always, conventional and dull.”

“What greater gift could you offer your children than an inherent ability to earn a living just by being themselves?”

“They thought to use and shame me but I win out by nature, because a true freak cannot be made. A true freak must be born.”

Geek Love Quotes On the helplessness of parents

“Grownups can deal with scraped knees, dropped ice-cream cones, and lost dollies, but if they suspected the real reasons we cry they would fling us out of their arms in horrified revulsion. Yet we are small and as terrified as we are terrifying in our ferocious appetites.
(…) Even knowing the illusion, we cry and hide in their laps, speaking only of defiled lollipops or lost bears, and getting lollipop or a toy bear’d worth of comfort. We make do with it rather than face alone the cavernous reaches of our skull for which there is no remedy, no safety, no comfort at all. We survive until, by sheer stamina, we escape into the dim innocence of our own adulthood and its forgetfulness.”

And here’s a video, after Dunn’s 2016 death, on what Geek Love meant to readers.