This bookish boyfriend quiz is sponsored by Bookish Boyfriends: A Date with Darcy by Tiffany Schmidt, from Amulet Books, an imprint of ABRAMS. 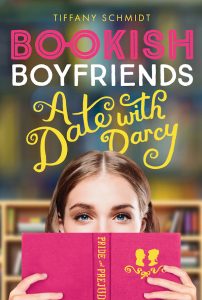 Boys are so much better in books. At least according to Merrilee Campbell, fifteen, who thinks real-life chivalry is dead and there’d be nothing more romantic than having a guy woo her like the heroes in classic stories. Then she, her best friend, Eliza, and her younger sister, Rory, transfer to Reginald R. Hero Prep—where all the boys look like they’ve stepped off the pages of a romance novel. And it is a truth universally acknowledged that first impressions can be deceiving…

It is a truth universally acknowledged, that a person with an affinity for books, will find themselves in want of a fictional boyfriend or two. Or five. But what fictional character is your ultimate bookish boyfriend? Take this quiz to find out, and then tell us your other favorite bookish boyfriends (or girlfriends) in the comments.

Looking for more bookish quizzes? Check out Quiz: Find Your Austenian Boo, Which Secondary Jane Austen Character Are You?, and all of our bookish quizzes.