I have just spent the last three months playing The Legend of Zelda: Breath of the Wild…And I have no regrets. It was a gift for the whole family to share, and share it we have! We all sit together, taking it in turns playing our individual games while the remaining family members watch on (and help out occasionally). Even as a spectator, it is beautiful to watch this epic fantasy play out. And it has absolutely inspired all of us to search for some more fantasy in our lives!

However, we need some serious epic fantasy with the visual stimulation that makes our imagination-eyes pop out of our heads. The kind of stories with puzzles to make you think and gallantry to make you swoon. Because when Zelda takes your breath away, you need something equally epic to catch it back.

Here are my favourite “Zelda inspired epic fantasy books”…plus a bonus to be released later this year. *squeeee*

1. Dragonriders of Pern by Anne McCaffrey 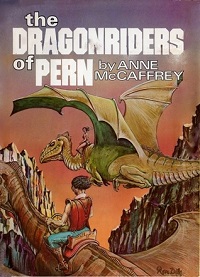 This is my go-to epic fantasy series. This is the Mother of Dragons before George R.R. Martin thought up his “murder-room” of stories. Originally written in 1967, McCaffrey displays some awkward sociological views through her characters; however, if you can work your way through this, she makes up for it with the extraordinary world she builds around you. From the silvery lethal Thread that rains down on the planet to the fire-breathing dragons flying through the air, there is enough story to fill your dreams with adventure and beauty. I’m not alone in this feeling; fellow Book Rioter Kristen has shared her favourite quotes from Dragonriders of Pern and the series often turns up in our top fantasy lists. If you haven’t read it yet, get on board! If you’re a Pern regular, then you know you need to revisit this series.

2. The Belgariad (series) by David Eddings 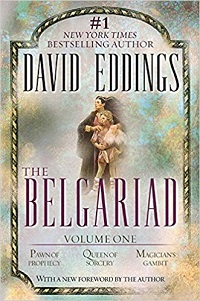 Another favourite from my childhood, I am now seeking out copies to share with my eldest son (11yo). This is the ultimate good vs evil series. In between battles of brain and brawn, Eddings fills your mind with the presence of magic and gods across sweeping scenes of beauty. When we talk “scene-setting,” we are not looking only at evoking your visual imagination. Eddings fills out his world with multiple layers of politics, religion, economics, history, and social norms. He is not the first to create this style of storytelling but he is definitely one of the more approachable.

3. The Imaro series by Charles Saunders 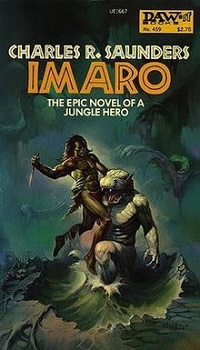 When first published in 1981, Imaro was considered ground-breaking; a new sword-and-sorcery series set in an alternate Africa, rather than the usual Medieval Europe. It has all the action and muscle you would expect from a Conan novel, while being set in a rich and vibrant world of culture and mythology. In fact, the physical world is created with such a strong foundation, it naturally supports the references to myth and legend that come later. The story starts with the childhood of a warrior, surrendered by his mother in the hope he would grow strong enough to overcome his destiny. As the story unfolds, we learn more about the culture and history of the land and the undeniable strength in the characters.

Imaro is the fantastical equivalent to the science-fiction of Wakanda in Black Panther. Be forewarned: there are two versions of the first book, due to the similarities between “Slaves of Giant-Kings” and the Rwandan genocide. Saunders was deeply upset about the events of Rwanda, and more so when one of his stories turned out to be too close to reality. For a long time, he didn’t want to bring the Imaro series back, in fear of bringing back so much evil. Despite writing the original many years before the Rwandan genocide, Saunders felt more comfortable rewriting the scene and subsequent stories. No matter how you feel about revisions and genocides, this series is still worth picking up. 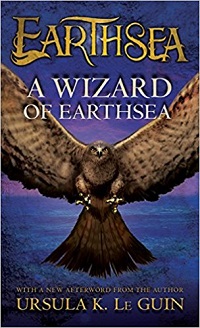 I love a series that grows with you. The kind of series where you can start reading Book 1 as a child and continue into young adulthood, without losing any of the magic or relevance to your own life. A Wizard of Earthsea is exactly that kind of “starting-book.” The protagonist is young, powerful, and subsequently a little arrogant. The story is his journey of self-discovery after a disastrous mistake unleashes an evil on to the world; His story is redemption through humility and wisdom. He comes to realise the importance of patience and caution, but also not to dwell on the past if it stops you from growing into the future. In this same way, Le Guin doesn’t dwell on her words. Her style is very straightforward and yet able to weave beautifully in out of the metaphysical concepts. For example, I think Le Guin created the first School of Magic. Given, it isn’t as detailed as Hogwarts, however Le Guin’s school serves its purpose and then opens up to a far greater world. This is why Earthsea makes the list: there is an entire world to influence her story, not just a small protected section.

5. The Hobbit by JRR Tolkien 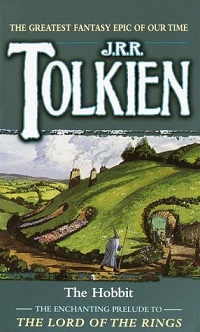 I think I would have been disowned if I had not included Tolkien on this list somewhere. He is definitely one of the most well-known writers in this genre. And yet, for the depth of world he has created throughout Middle-Earth and beyond, I personally prefer the shorter tales rather than the complete Lord of the Rings. My all-time favourite scene is from The Hobbit, when Bilbo is sharing riddles with the broken Gollum. The only thing I love more than thought-provoking riddles is a dark dark cave in which to ponder them. Make sure you follow it up with The Silmarillion, the best display of Tolkien’s epic world-building.

6. The Way of Thorn and Thunder by Daniel Heath Justice 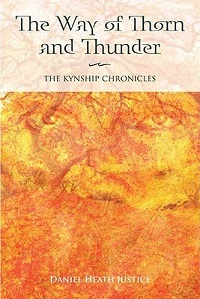 One of the things I LOVED about The Legend of Zelda: Breath of the Wild was how it incorporated so many different cultures and environments within its storytelling. Growing up on fantasy books, it becomes clear how prolific the European/Medieval influence is. The Way of Thorn and Thunder is not. Justice draws upon the fantasy-legacies in his storytelling, with epic world-building and magical details but the setting is both geographically and socially different from almost anything else I have read. We’re taken to the Old World of Native Americans, with deep roots in natural magic and sexual fluidity. It has a common theme of colonialism, tangible vs. intangible, and the battle between the preservation of old ways or the introduction of change. Full disclosure, I am not from North America and thus I am not familiar with the Cherokee Trail of Tears. But I am now interested. Justice has built a world so vibrant, I need to read more about the history so I can pay my respects to the characters, both real and fantasy. 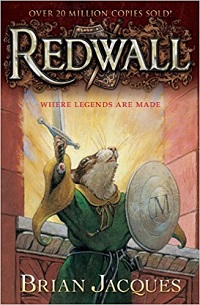 There is nothing more fantastical then an army of courageous mice taking arms against the wicked stouts. The main plot is the battle between the mice and the stouts but it is so easy to be caught up in the sub-plots and characters and the descriptions of everything…The FOOD! I have never wanted a cookbook from a novel so badly, well at least not since Terry Pratchett and Nanny Ogg’s Cookbook, but even still it doesn’t compare to the nutted cheese or berry cakes or…wait, I was distracted by a subplot again. And that’s the beauty of Redwall. It is able to fill you with a story of courage and determination in your standard “good vs. evil” scenario, and yet it fills in all the borders like a gorgeous Graeme Base picture book. Ideal for those looking for an alternative to “Monster Cake.”

8. The Olondria series by Sofia Samatar 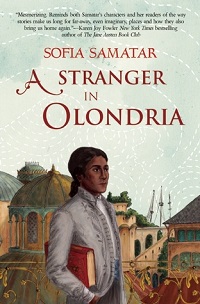 The Olondria series is less of a series and more of a connection between books. The first book, A Stranger in Olondria, follows Jevick as he navigates the political struggle between two powerful cults in a country balancing on the edge of war. All because he is haunted by a young illiterate girl who simply wants to be set free. The Winged Histories is more of a prequel detailing the events leading to the war in the first book. The first feels like a love song written for all literature, like a loving embrace of all we have in language and stories. It is a deep deep dive into a world saturated with stories within stories. It is not an easy read, and definitely a book to be savoured. It is frustratingly beautiful and seductive. I am yet to finish the second book but I am still in love with Samatar’s magic. 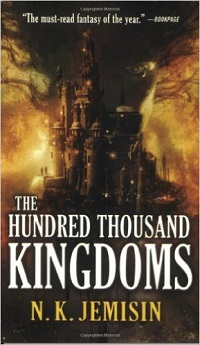 I have mentioned a few YA/kid-friendly suggestions above; this one is not. The Hundred Thousand Kingdoms centres around gods…And anyone who is familiar with your traditional deity-filled myths and legends knows the gods just can’t keep it in their pants. Or anything else in moderation. This series is no different. Where it IS different is in the complex balance between solid world-building and awesome narrative. Jemisin went out of her way to beat down the usual fantasy tropes and gives us a different type of story. We have a barbarian girl called back to her mother’s royal family to partake in the power struggle amongst the elite. In doing so, she learns the history of slavery amongst the general population, including the enslavement of gods. There is so much going on with politics and magic and lust, I was always grateful for the opportunity to pause and visually recreate the amazing scenery (e.g. A floating palace. A gorgeous, majestic, ridiculous floating palace). I haven’t finished the series yet so SSSSHHHH! No spoilers in the comments. 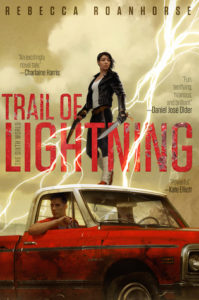 My final recommendation hasn’t been released yet but I am very excited by the concept alone. It has a monster hunter. It has gods and heroes of legend. It has a climate apocalypse. Hell, it’s already on our Most Anticipated YA Fantasies of 2018. This is Roanhorse’s debut novel but you can find a taste of her writing with Welcome to Your Authentic Indian Experience™, a short fiction published with Apex Magazine in 2017. Trail of Lightning has Maggie Hoskie, a supernaturally gifted monster hunter from the Navajo reservation. She is called into help find a missing girl and ends up in The Sixth World, filled with monsters, tricksters, and witchcraft. Sounds like it has enough monster and legends to fill my Zelda-gap, so now I’m just hanging out for June 26.

It’s a short list, which means I’m open to any other recommendations. But they have to be big! They have to be beautiful! And they absolutely have to feed the grandiose nature left behind by The Legend of Zelda: Breath of the Wild. Share your favourites with us.