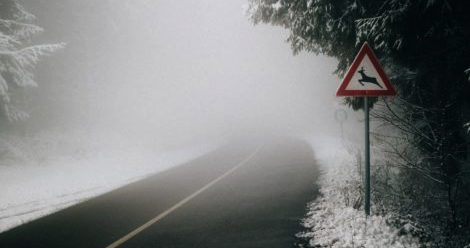 My winter reading list always includes a bit of fantasy. There’s something about the cold, biting air and the otherworldly promise of the untouched snow that makes me want to read about far off lands on these shortest days of the year. This winter break, I found myself reading some of the most interesting fantasy that I’ve ever come across in three distinct novels. Deep, introspective fantasy with hints of folklore and myth and sentient animals as either the main character or as a significant supporting character. I hesitate to call it anthropomorphic fantasy, because it’s so much more than that. Perhaps magical realism fits best. Genre aside, I now present to you my new spiritual advisers: crow, fox, and crab. 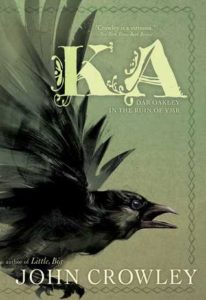 The first book in question is Ka: Dar Oakley in the Ruin of Ymr by John Crowley. I listened to this one on audio, read by the author. It’s the story of an immortal crow, following him through his many lifetimes and his waxing and waning interest in the human world. This one is really deep, especially in its treatment of death, the soul, and the afterlife. Most compelling are Dar Oakley’s travels beyond the veil and the consequences these trips have for him and his companions. The story is told by an old man who finds the crow and becomes the keeper of the story of Dar Oakley, the first crow to have a name. Crowley gets all the points for his narration, which is simplistic with just the right touch of child-like wonder. Listening to this in the darkest part of winter was really quite spiritual. 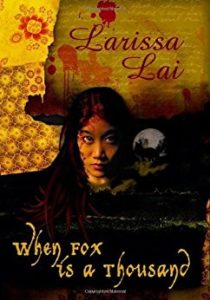 Next up is When Fox is a Thousand by Larissa Lai. It has a lovely little key of illustrations denoting each character’s section of the narrative. One of these characters is a fox out of Chinese mythology. She seems to be a combination of a trickster and a ghost, leaving her mark on the lives of a few particular women throughout the ages. This one was more interesting for its many female and queer characters past and present, including a ninth-century poetess/nun and a college student living in contemporary Vancouver, whose stories were just as lyrical and poetic as the fox making her way to her 1,000th birthday. 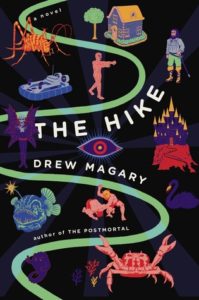 The last book I want to add to this trio is The Hike by Drew Magary. I actually read this last summer, but I haven’t stopped thinking about it since. I recommend it as much as I can, and recently a friend of mine got sick of my nagging and finally listened to it. Revisiting it through his eyes made me realize it fits perfectly in this genre. At its core, The Hike is a classic “quest” tale of a man’s journey back to his family. I find this book so unique, though, because it’s a fever dream combination of fantasy, horror, and comedy. It has, hands-down, one of my favorite characters of all time—Crab. The Crab is a snarky, foul-mouthed guide to our main character, Ben, on part of his arduous journey. In audio, his voice sounds like that of an old man, yelling at the kids that just egged his house. If he had a fist he would be shaking it in the air in disgust and resignation. It’s perfect and oddly beautiful and has one of the most satisfying endings I’ve ever read.

Completely by accident, I also recently came across a short film that fits within this genre. It’s called Limbo, based on a short comic by Marian Churchland in the collection Meathaus S.O.S. It’s a brief, poignant story of a man that finds a dying dog in the desert. He gives the dog a drink of water and in exchange the dog grants him one wish.

If winter is that season that turns your mind inward like me, but you’re still not a serious grownup so you take your philosophy with a healthy helping of fantasy, consider giving one (all) of these books a try.

Do you know of any other books that fit this unique genre? Drop them in the comments.