If writing important stories about queer love and feminism made you eligible for sainthood (well, it does, but only in the religion my friend and I invented, and we’re less respected than Pope Francis, so it’s not like there are actual stained-glass windows of Jeannette Winterson), Emma Donoghue would probably be canonized. She’s written at least four novels driven by lesbian romance, a collection of feminist fables called Kissing the Witch, and a history of desire between women in Western literature. Even her best-known novel, the harrowing Room, is as much feminist text as sensational thriller: it grapples with a girlhood lost, a motherhood born of violence, and the ways trauma continues to imprison us even after our bodies are technically free. 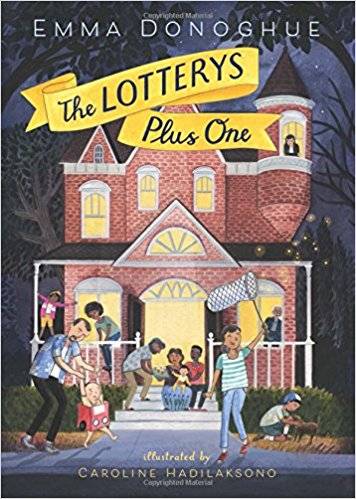 As a new Donoghue fan, I want to read more of her contributions to the queer feminist literary canon. But we’re talking about a pretty heavy bibliography here, and it’s been a tough year to be a queer person. Rioter Jessica Woodbury wrote on National Coming Out Day about feeling exhausted by stories about queer suffering, and I’m with her: Sometimes, a girl just wants a happy ending. Thus it has come to pass that as important as all of these texts Donoghue has crafted undoubtedly are, the most important one to me is her middle grade fiction novel, The Lotterys Plus One.

Lotterys came out in March of this year. I’ve read it four times. Okay, five, because at some point over the summer I sweet-talked my partner into reading it to me before bed, and, well, we finished it. Whenever I thought I’d gotten the last fix I needed from this warm delight of a book, there was another headline, another deadline, another fear that I was too weird and wounded to hang onto the people I love. And then I’d return to “Chapter 1: The Dormant Grandfather,” and slip back into a peaceful, colorful world where everyone’s pretty weird, but everyone loves each other anyway.

Lotterys makes sense of turmoil on the same simple, miraculous level that Sesame Street, Mister Rogers’ Neighborhood, and a long talk with your best friend can. If you long for more stories about queer people that get beyond coming out, well past angsty puppy love, and deep into the everyday ups and downs of happily-ever-after, this book is for you.

The premise reads like a queer utopian fairy tale with a good sense of humor. Once upon a time, two multiracial couples, one gay and one lesbian, decide to co-parent a child. (They also decide, over tequila, that their progeny will call them PopCorn, PapaDum, MaxiMum, and CardaMom.) The day their baby is born, one of them finds a lottery ticket on the hospital floor, and since this is a fairy tale, the ticket wins. The four new parents use their winnings to buy a big house in a progressive neighborhood and raise a loud, homeschooled, utterly ridiculous family there. In the house they call Camelottery, whether you’re an adopted child, a transgender child, a differently-abled child, or a rescue pet, you grow up knowing that your parents love you and love each other.

It would be easy for a world as idealistic and insulated as Camelottery to feel cloying, or just unbelievable. But Donoghue makes a clever move here: she sums up the fairy tale part of her story in a half-page preface to Lotterys. That means what we get from the Lotterys is a happily-ever-after—not one where everything is always perfect, but one where a queer family faces messy, mundane, heartbreaking, hilarious, entirely normal problems. It’s the kind of happily-ever-after that’s really just the beginning.

Building a queer family in a homophobic world can be frightening and lonely. Some days are bright with the euphoria of having found the people who will share your life with you, but others are fraught with questions that are easier to answer if you’re straight. Where will we live? What will we call each other? Are the marriages we want legal? If we want kids, where will they come from? How safe will we be when we kiss in public? And for how long?

It’s a relief to spend time with a family like the Lotterys, who grappled with those same questions and, where they could, came up with answers. I think that’s why I keep returning to Lotterys—not to escape, but to remember why I’m still fighting. To visit the past I wish I’d grown up in, and the future I hope to grow old in one day. To remind myself that I’m getting closer to the happily-ever-after I’ve always wanted, and that even once I get there, it will only be the beginning.