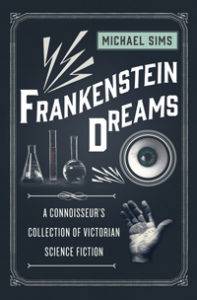 Michael Sims has a new volume in his series Connoisseur’s Collection called Frankenstein Dreams. These anthologies are aimed at bookworms who love short stories from the 1800s, and this volume features science fiction that Charlotte Brontë or Charles Dickens might have read. Sims has now produced four of these Connoisseur’s Collections of Victorian fiction. The earlier ones were The Dead Witness for detective fiction, Dracula’s Guest for vampire stories, and The Phantom Coach for ghost stories. Michael Sims is probably most known for his 2011 book, The Story of Charlotte’s Web. Sims writes nonfiction on a variety of subjects, and the stories in Frankenstein Dreams are annotated by his scholarly insight that reveals a close psychic connection with the 19th century.

I listened to Frankenstein Dreams, narrated marvelously by Tim Campbell. I find hearing 19th-century literature far more rewarding when read by a professional because my inner reading voice always sounds too modern. The real value of this book is time traveling back to the nineteenth century to learn how science fictional ideas we believe originated in the twentieth century are older than we thought. That’s enlightening on many levels.

Take for instance the 1895 story, “A Wife Manufactured to Order” by Alice W. Fuller, about a man who buys a mechanical bride because he fears a real wife will crimp his routine. How many stories, movies, and television shows have dealt with this idea since? Was Alice Fuller’s story the first? Or is the idea even older, and we don’t know it because of collective forgetfulness?

Have you seen Blade Runner 2049? What exactly are replicants? Aren’t they closer to Frankenstein’s monster than robots? Mary Shelley came up with that idea in 1818. Two other stories in the collection also deal with creating artificial people with biology rather than mechanics.

One of my favorite stories in the collection is “Man-Bats on the Moon” by Richard Adams Locke excerpted from a series of six fake news articles published in 1835. Today this is known as the Great Moon Hoax, and it was as much of a sensation in its day as Orson Welles fooling people with H. G. Wells. Of course, if you are young enough you might not know about the famous 1938 radio broadcast.  Frankenstein Dreams constantly reveals how most pop culture is lost in time.

Sims collects fifteen short stories and five excerpts from classic novels to illustrate a broad selection of science fictional ideas imagined long before the term science fiction was coined. Most of the short story authors are unknown today, which is a shame because their stories reveal what wonderful imaginations they had.

However, Edward Page Mitchell might merit literary rediscovery, because he was a prolific writer who wrote about many ideas that Verne and Wells are currently remembered for. You can find five of his stories here, two of which were used in Frankenstein Dreams. My favorite was “The Senator’s Daughter” which was first published in 1879 and must have been mindblowing to readers of its day. Mitchell imagined a future 1935 America conquered by the Chinese. It includes a political party based on vegetarianism, with radicals in the party who worry about plant consciousness and eat only artificially produced pills. Citizens of Mitchell’s imaginary future travel by what sounds like a hyperloop train, and he describes a prison system that uses suspended animation instead of jail. “The Senator’s Daughter” also deals with race and gender issues very advanced for its era.

I was thoroughly delighted by Frankenstein Dream, listening to it every morning while exercising, or in the afternoons on my bike ride. My knowledge of the 19th century is mostly shaped by a couple dozen classic novels, many of which were written by just two authors, Jane Austen and Charles Dickens. Listening to the stories by these forgotten women and men broaden my perspective on that century.

I realized folks in the past thought about fantastic possibilities and imaginary futures just as much as we do today. It makes me wonder if our science fiction will be forgotten by future generations and we will only be remembered for our realistic fiction. I wonder if the readers of tomorrow will believe their science fictional speculations original because their pop culture will have forgotten ours?