In a promotional video for DC’s next big event, Doomsday Clock, writer Geoff Johns delivers a horrifyingly frat-boy-ish explanation of his creative process. Wearing a faux-sports-team shirt that says “Introvert,” Johns muses: “if there’s one word for [Doomsday Clock], it’s thought provoking. And we want people to think about it. They can think about it in fun ways, they can think about it in serious ways.” The thinking that can be both fun and serious has something to do with the state of American politics. “In November the election happened in the US, and then a lot of other things happened in the world, and I was looking at everything…and it was in my head.”

Admittedly, spoiler-phobia contributes to the vagueness of this promo. At the same time, John’s inability to name any specific political issue is consistent with the way so many of these crossover events refuse to locate the very problems they attempt to address. I fell in love with superheroes because of Johns’ deeply felt work on Teen Titans and JSA, which makes me all the more disappointed at him now.

In troubled times, people turn to the characters and stories they love, which may be why the the past few months have seen a deluge of large-scale superhero event books hit the stands. Secret Empire, Legacy, Rebirth, The Oz Effect, Doomsday Clock, and Dark Knights: Metal are all available or upcoming. While these stories differ from each other, similar ideological concerns thread them together. Marvel Legacy and DC Rebirth, for instance, bear striking resemblances. In both, superheroes stripped from the public consciousness make their return. Wally West, the Legion of Superheroes, and the Justice Society have been removed from DC’s timeline. In Legacy, the Fantastic Four are the forgotten ones. In a beautiful panel, Johnny Storm and Ben Richards gaze out at a city that no longer remembers them. The present is wrong because of how we have forgotten the past, these stories suggest. 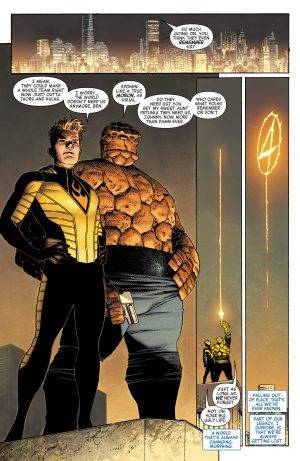 In The Oz Effect, Superman flies to a fake African country to stop the destruction of supplies by rebel combatants. “Logamba is destitute. Wracked by political conflict for years,” Superman muses. “Makes me appreciate home. It might not be perfect, but people are happy here.” My Superman would never be so naive as to make some statement about happiness in America. A white supremacist is president; my Superman knows and hates this. Marvel’s Legacy has perhaps some of the weirdest political musings. “There are so many of us now in all different shapes and colors and creeds. Or maybe there always were and we just didn’t notice” (emphasis theirs). Obviously, “they” were always there. And who is this “we” who didn’t notice? Is the “we” a white supremacist culture that has violently ignored all kinds of people? 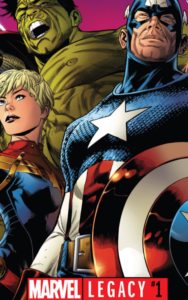 These declarations about the state of the world contain enough vagueness to maintain political neutrality. They hinge on the assumption that the world is a bad place right now, but refuse to locate the problem, for fear of alienating any portion of their crowd. Lex Luthor and every other surrogate of white-collar evil should currently bear much more striking resemblances to Trump. Modern superhero stories are not targeting the president who actively promotes white supremacy. 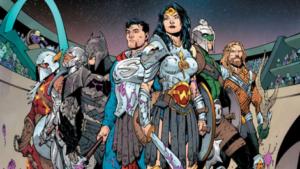 Dark Knights: Metal has been an intensely fun crossover event so far, in which Scott Snyder plays with the weirdest and best of the DC universe. In his action-packed and nutty story, Batman becomes a portal for a demon from a nightmare realm. Yet, it isn’t hard to see nightmares coming to our earth as another vague, apolitical attempt at political commentary. “Right now, at this particular moment, it’s a stressful moment and the bonkers fun of comics is incredibly important,” Snyder says in an interview, seemingly promoting superhero comic books as an escapist venture. “That doesn’t mean it’s escapism, this story is deeply personal for me.” Okay…so what is it that Metal has to say?

“You look around and see versions of yourself and of this moment and you wake up and think, how did we get to this place? How am I so at odds with the people around me?” Of course, the only nightmare Snyder can speak on is the nightmare of political division. Once again, a corporation afraid of alienating their audience can only say: it sucks that people can’t agree.

This is not to say that great political statements have not been made in recent comics. Marvel in particular has released some incredible new books. America is in my opinion the most profoundly political superhero story on stands. For one thing, the vast majority of the characters are women, mostly queer women of color. The story also has an investment in the language and ideas of feminism that feels unprecedented. Gabby Rivera fills the book with feminist values of self-care, self-knowledge, historical grounding, and family and extra-familial care networks. I don’t at all want to devalue works like America in this article. At the same time, even the best books have not taken a direct enough stand against our super villain, the president.

Geoff Johns’ run on Teen Titans began with young adults teaching teenagers what it means to fight for justice in a violent world. Deathstroke shoots Kid Flash because he doesn’t want children to become superheroes. Superboy struggles against his Lex Luthor DNA, the evil lying dormant inside him. I developed my understanding of the fight for justice alongside Superboy, Kid Flash, and Wondergirl. Comic book writers taught me so many of my values. Now is the time to stand up for them. I am upset that there is no direct battle with the current supervillain of our time. Unless Barbatos, the big bad of Metal, turns out to literally be Trump, it is not enough. My superheroes would never stand for this kind of cowardly escapism.