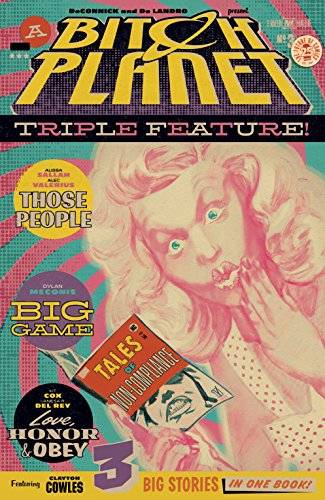 Kelly Sue DeConnick and Valentine De Landro’s Bitch Planet is probably the most feminist, satirical, diverse, and visceral story that I’ve read in awhile. The series, described by DeConnick herself as a “dystopian sci-fi take on the exploitation genre,” started off in December 2015 and has published 10 issues (and two trade paperback volumes) to date. Taking a brief break from the series, DeConnick and De Landro decided to create an anthology series, recruiting other artists and writers to contribute to the series.

Not only has Bitch Planet won numerous awards and legions of fans, but the property has included futurists, feminist writers and scholars in the short stories, think pieces, and interviews that are featured in every issue at the end of the comic. Artist Lauren McCubbin has created some of the coolest retro backpage ads I’ve seen since I was a kid rummaging through my friend’s dad’s comic book stash.

In the original series, society is run by the Protectorate, a right-wing political group of megalomaniacal men who call themselves the Fathers. In this patriarchal society, women can be arrested or incarcerated for even the most minor of offenses, such as being overweight, gay, too smart, childless, or in one woman’s case, simply being unwanted. Offenders or those who defy the law are considered “Non-Compliant” and are shipped off to an off-world penal colony called the Auxiliary Compliance Outpost, nicknamed “Bitch Planet.” There, they are subject to assault by the prison guards, verbally abusive “therapy,” and are made to battle against each other for sport in a kind of off-world prison Fight Club. But they are fighting back.

Bitch Planet: Triple Feature brings us three stories created by three new teams of writers and artists in each issue that all plausibly take place within the world of Bitch Planet, but just outside of the main arc. In Windows, written by Cheryl Lynn Eaton and Maria Fröhlich, a female guard at the prison is fired when a prisoner dies on her watch, and ends up working as a maid for one of the Fathers who watches the prison’s drone feed for entertainment. In This Is Good For You by Danielle Henderson, Rowe Stein, Ted Brandt, and Clayton Cowles, a woman invites her friend to see a movie that turns out to be a propaganda film. In it we see one of the tactics used on female members of society outside of the prison. Taking plays right from a ’50s etiquette handbook, women are told that their purpose in life is to be thin, have babies, and take care of the home. All notions of work and leadership are shunned because non-compliance is unacceptable. 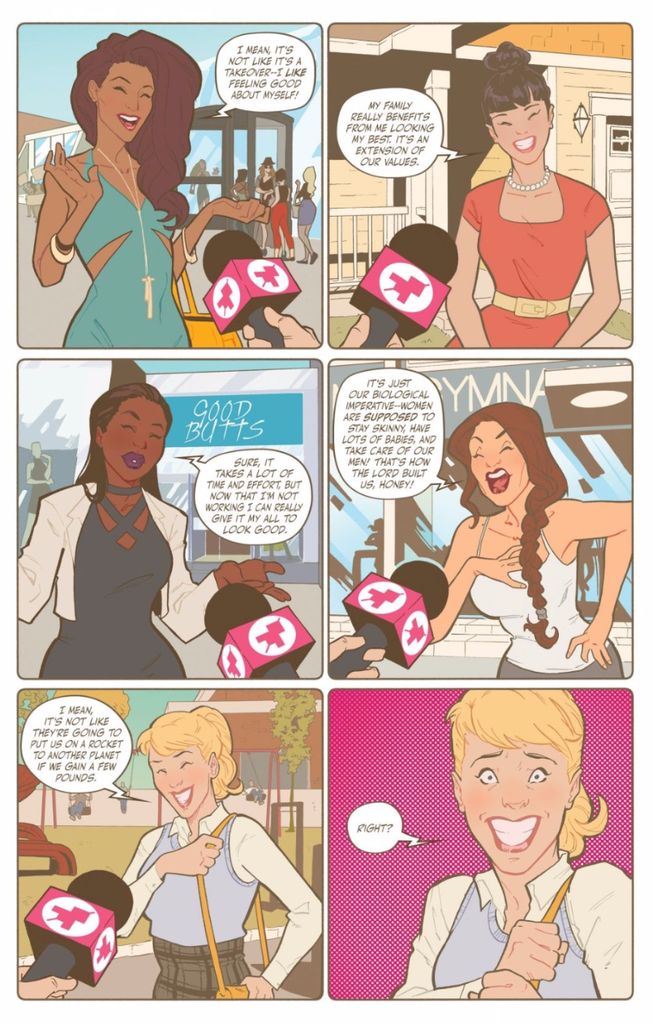 Most of the Triple Feature stories are told in the not-so-distant future, which make them eerily plausible, like Those People by Alissa Sallah and Alec Valerius. This narrative demonstrates how even well-meaning law enforcement can commit horrible acts when indoctrinated with fear and bias. When the inadvertent massacre of a house full of LGBTQ partygoers leaves a combatant visibly shaken, his actions are written off as “pre-emptive self-defense.” That concept, in this day and age, is so plausible in fact that it terrifies me.

In  Without and Within by Andrew Aydin and Joanna Estep, a young woman is set up for failure in a at her first day on the job at a Trump-esque firm as she has to simultaneously figure out a new computer system to print a speech for her boss, and fend off the sexual advances of her boss’s partner…whose actions said boss had clearly sanctioned.

I think the piece that punched me in the gut (albeit unintentionally I’m sure) was What’s Love Got to do With It by Jordan Clark and Naomi Franquiz, in which a curvy thirty-something Latinx woman puts herself through an hilarious yet horribly disrespectful set of dates in order to quickly find someone to marry so that her parents won’t be hit with a government “Old Maid Tax” which would force them to lose their home. 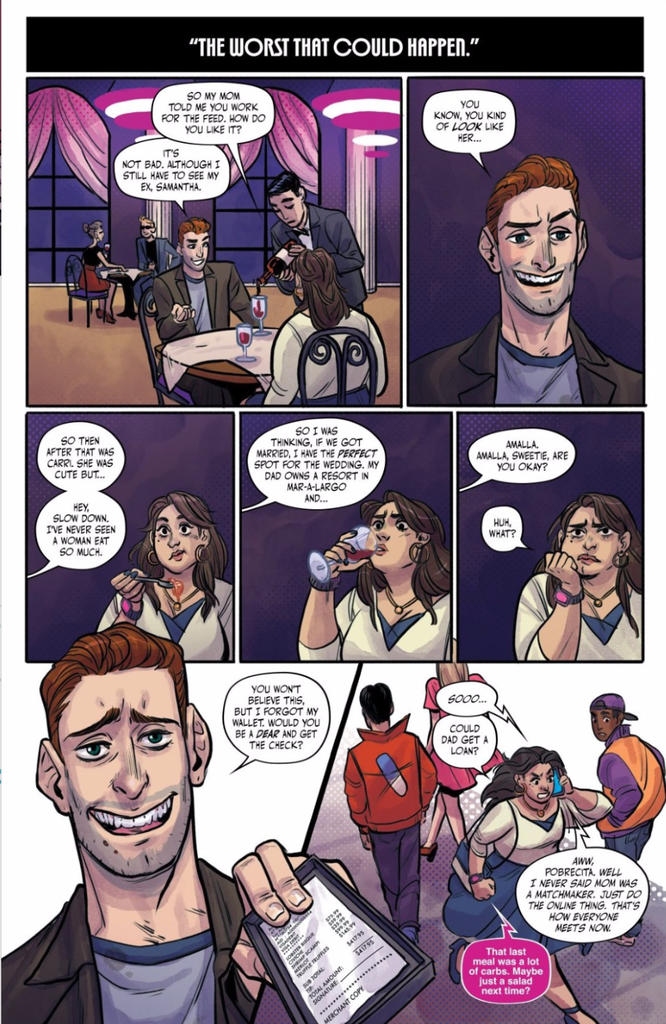 If that law were real, my parents would’ve been homeless.

As one would expect, these stories are multilayered and, like the rest of the Bitch Planet series, uphold the white het cis male concept of femininity and condemn female choice, careers, and independence as “threats to the patriarchy.” Although there is struggle and often death, there is also perseverance and triumph as well.

DeConnick and De Landro’s commitment to diverse writers and intersectional feminism is also to be commended here. In every issue I’m seeing names that are new to me or to this medium, and I’m happy that these artists are getting a chance in the spotlight. However, as with most anthologies, I’m not a fan of every story or all of the artwork, but since Triple Feature is a series of issues and not a stand-alone piece, I have absolutely no problem reading these tales while I wait for the next installment of the main arc.