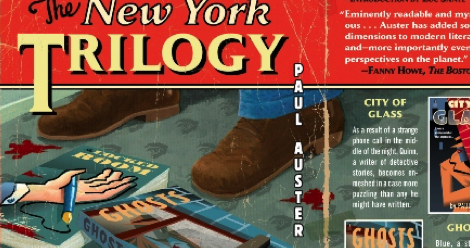 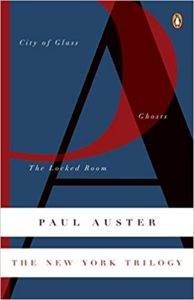 When you see postmodernism in Hollywood and on H&M mannequins, you know it’s getting old. Marvel films are chockfull now of tongue-in-cheek jokes, which pop up at all the wrong, supposedly dramatic moments because people are so afraid that feelings are cliché; in malls, loudspeakers blast covers and remixes more than original songs, and mannequins are decked out in what seems like a mess of random stuff thrown together. I admit it’s sometimes liberating and exhilarating, but too many shop assistants just don’t know what they’re doing. Anyway, when it comes to literature, the well-exposed readers of today have long grown weary of such pomo ploys of empty pastiche, carnivalism, etc. But recently I stumbled upon a postmodern detective novel that’s not quite like your usual detective novel. But it’s also not quite like the old nihilistic waiting for Godot either. Nor the slightly-less-old (but still pretty old) waiting for the crying of lot 49 (in Pynchon’s novel, the crying of lot 49 stands for the next clue provided by Fate, i.e. Chance, that you try to find meaning in, in vain).

The author of this superbly peculiar detective thriller is Paul Auster, and he appears, creepily, as a ghostly presence—or rather, a marked absence—within the first few pages of the City of Glass (the first book of his New York Trilogy).

Then, as if from a great distance, there came the sound of a voice unlike any he had ever heard. It was at once mechanical and filled with feeling, hardly more than a whisper and yet perfectly audible, and so even in tone that he was unable to tell if it belonged to a man or a woman.

“Who is this?” asked Quinn.

“Is this Paul Auster?” asked the voice. “I would like to speak to Mr. Paul Auster.”

“There’s no one here by that name.”

Quinn is a writer, Auster’s persona in the novel. He receives a call in the dead of night asking for “Paul Auster” the detective, but eventually finds out that this “Paul Auster” is another writer. We get other characters and personas in the novel who are all reflections of one another, doppelgangers of the author and also of the authors and characters of other novels. In Auster’s looking glass-text, we get a strange mise en abyme effect, the feeling of standing between two mirrors and seeing yourself repeated endlessly, in an abyss of the self. As Borges says, “It only takes two facing mirrors to build a labyrinth.” And Auster builds a huge-ass labyrinth indeed with a thousand mirrors and a thousand self-same faces: “an inexhaustible space, a labyrinth of endless steps” that always leaves Quinn with the “feeling of being lost … not only in the city, but within himself as well.”

All the three books in the series reflect one another, draw from and parallel one another, an effect that takes on a surreal, almost nightmarish quality in Ghosts, the second novel in the trilogy. Here characters seem more like placeholders than actual people. Not only are they named after colours, White, Black, Blue; they also swap places with dizzying speed, leaving you reeling in bewilderment. Sometimes bewilderment turns me off, but not in this case; the narrative is still surprisingly suspenseful. A sentence, or a paragraph, could shock me so much I had to pause, read it again, then backtrack a few pages and read the whole section again. In all three novels you’re led through a boggling mirrored world of dark twists and turns: the hunter becomes the hunted, the watcher becomes the watched. And I, watching the story unfold, suddenly had the prickling sensation of being watched too.

Maybe it was because I was reading, like Quinn, in the dead of the night. But it felt as if the author were watching me. Or as if the text itself was reading me. But of course that is logically impossible; it was I, watching myself. Or rather, it was my uncanny double, the own other, watching me in my solitude as I read, just as Blue watches Black read and write through a window.

So I found that not only do seemingly separate characters merge, becoming interchangeable; I became interchangeable with them too. The text became my dark mirror, out of which labyrinth I, the reader-made-detective, also had to escape.

Auster’s doubles do serve the usual postmodern function of deconstructing the certainty or wholeness of the subject; but they do more than that, I think, and they do it more meaningfully. Jameson critiques postmodernism for capitulating to capitalism and leaving old structures of control and commodification untouched (what Hollywood and H&M and practically the whole music industry are doing); but Auster’s doubles don’t just say “oh, boo-hoo, there’s no coherent ‘I’ anymore, no coherence at all in the world anymore so screw this shit! Let’s just play and have fun.” In Auster’s novels there is merit in searching for this elusive “I,” as well as the equally if not more elusive “other.” Through the solitude of reading and writing, watching and being watched, Auster’s characters gain introspection, and through this introspection they glimpse some clarity in the chaos, a way toward self-understanding, even if that remains a place never wholly reached. The “private eye” of the reader/writer turns inward and is blinded, then attains a sort of clarity; and we as readers become detectives too, undergoing a similar journey:

I lost my way after the first word, and from then on I could only grope ahead, faltering in the darkness, blinded by the book that had been written for me.

We may be blinded, we may understand little; but like Auster’s third and last narrator (an insecure writer whose task is to publish his talented friend’s, Fanshawe’s, work) we may find paradoxically in this blinding search a “feeling … of great lucidity.” The locked room of “I” and “other,” the locked room that is “inside my skull,” is figured in images of coffins but also in boxes that provide freedom: as a child, Fanshawe would sit in a large appliance box, which he called “his secret place,” where he “could be wherever he wanted to be.” Which is why, even though Auster’s narrator descends into an abysmal darkness—a sense of being buried alive—when he reaches out to his other, his double, he eventually comes to terms with it: “a moment came when it no longer frightened [him] to look at what happened.” This looking back, this retrospection, is his struggle to make sense of the darkness of self and other; make sense of, and thereby to “say goodbye” to it in writing. “This struggle is all that really matters. The story is not in the words; it’s in the struggle.” The struggle, that is, to find an ending; to conclude or understand conclusively. In this struggle there may be an escape, a way to relate to self and other without reducing them to something you can stamp a “The End” on and close the cover.

So after putting his narrator through a long and seemingly futile quest for meaning, Auster ends his trilogy with a twist on the classic metaphor for escape:

… It was raining again, and I could see my breath in the air before me, leaving my mouth in little bursts of fog. One by one, I tore the pages from the notebook, crumpled them in my hand, and dropped them into a trash bin on the platform. I came to the last page just as the train was pulling out.

Out, not in, leaving the author on the platform beside the trash. The narrator intends to return to his wife and son in New York, but this is the second train he’s missed. For the third time Auster refuses us a clear ending. Closure is deferred perpetually, but there’s hope yet for the hollow, superficial, lacking, fragmented postmodern subject. As the narrator says, “darkness is what surrounds me whenever I think of what happened … [but] writing about it is the one chance I have to escape.”

Writing, which is basically another form of reading, which is basically another form of detective work. Will writing help us escape (or break into) the locked rooms of self and other? We don’t know, but it may help us look at this abyss without being frightened. It may lead us, like Auster’s narrator, to the train platform—towards others at least, if not on our sure way to them. Auster’s story, as the narrator says at the start, is itself a whole big question; but “whether or not it means something is not for the story to tell.” We don’t know if there’s any meaning lying behind the questions we ask, the clues we collect or the patterns we think we see; but if the story is in the struggle, then this story suggests that’s what we must do: struggle on in questioning. Questioning, and answering questions with yet more questions. Which is also the endless process of narrating and interpreting, reading and (re-)writing. And contrary to pomo meaninglessness, contrary to the stagnancy of waiting for a meaning that never comes, such a struggling would mean a basic hope, if not belief, in meaning.

P.S.: If you’re hungering for more stories like this, I love this list of 100 Must-Read New York City novels!