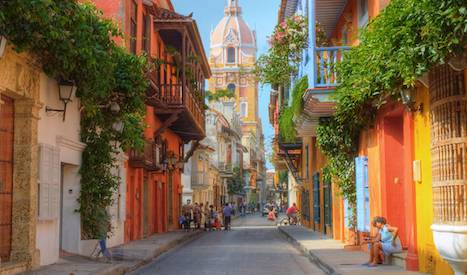 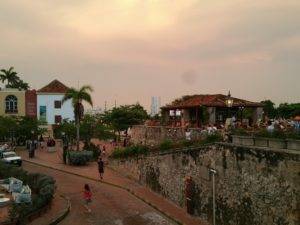 Cartagena de Indias is a beautiful port city on Colombia’s Caribbean coast, comprising both modern neighborhoods and residential areas and an old, walled-in historic city area that is full of life. You can get some street food, walk on old roads lined with restaurants and artisan shops, and of course, catch a few bookish sights. 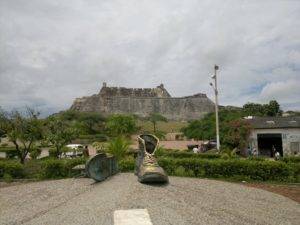 The poet Luis Carlos López loved his hometown of Cartagena, so much so that in a work titled “A Mi Ciudad Nativa” (translation: “To My Native City”), he writes about how he loves it like his old, worn-out shoes. You know the ones – those familiar, comfortable shoes you love, despite them being, well, old and worn. At the base of Castillo San Felipe, which I absolutely recommend you go visit, by the way, and is visible in the photo above, there is a monument called Los Zapatos Viejos (the old shoes) dedicated to him (created by sculptor Hector Lombana). The poem itself is in view at the monument, but you can read it from the comfort of wherever you are right now (and here’s a translation).

Cartagena is also home to a few book shops, some in an actual brick and mortar location, others at the various markets in the area. There’s an abundance of wonderful sculptures in the area, such as Fernando Botero’s La Gorda Gertrudis, located in Plaza Santo Domingo, and my personal favorite, India Catalina, which was sculpted by Eladio Gil Zambrana. Catalina was an indigenous Colombian woman who was abducted and enslaved in Santo Domingo, and later served as a translator between the Spanish and indigenous in Colombia since she had learned their language. The monument serves to honor their native american roots, and La India is a symbol used today, for example, to award artists at the Cartagena international film festival. She stands at one of the entrances to Cartagena’s old town.

Perhaps the most exciting revelation for me while visiting Cartagena was learning that not only did Gabriel García Márquez have a home there, but his ashes are at a nearby cloister (currently doesn’t function as one – it’s a historical building). A taxi driver made an offhand remark while coming around a corner, waving at a huge, mamey-colored wall saying, “That’s Gabriel García Márquez’s residence. It isn’t open to the public at this time, but there are plans to turn it into a museum.” He stopped a moment so I can climb some steps nearby and catch a glimpse, but the house is not really visible from the outside. Resigned, I returned to the car, only to be told that his ashes were nearby. Or some of his ashes, at any rate: the rest of his remains are in Mexico.

The Claustro de la Merced, which houses Márquez’s mausoleum and is operated by Cartagena University, is also not open to the public. Not really, but some folks are able to have a gander inside depending on the day or who’s on guard. Those who gain access will be told they can’t share any photographs they take, if they’re allowed to take any at all, and can spend a little time enjoying a nice garden with a bust of Marquez standing at the center, where his remains are. It’s a quiet place that is currently undergoing some refurbishment, but do try to have a look if you’re ever in Cartagena. 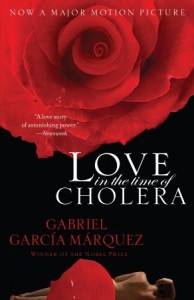 Fans of the film adaptation of Love in the Time of Cholera can also enjoy the city by simply strolling around and recognizing different spots from the film set locations. Even if you aren’t a fan of the film, you can visit the locations and enjoy being somewhere you’ve read about. Besides Cartagena, some of the book locations are probably also inspired by nearby Barranquilla.

Cartagena de Indias is a magical city, rooted in the past but ever in the present, near gorgeous beaches, and boasting killer views of the sunset each night. If you can get yourself out there for a few days, I can’t recommend it enough, and not just because it’s appealing to book nerds.