There are a lot of librarian stereotypes in popular culture. As much as I love Giles from Buffy the Vampire Slayer, he’s an anti-technology luddite. The librarians on Parks & Rec are a punchline. There’s even a documentary, “Hollywood Librarian,” about all the stereotypical librarians from the movies, with a tight bun and a shushing finger.

As a librarian, I try not to take offense.

If there’s an author I can trust to get a librarian right, it’s Laini Taylor. 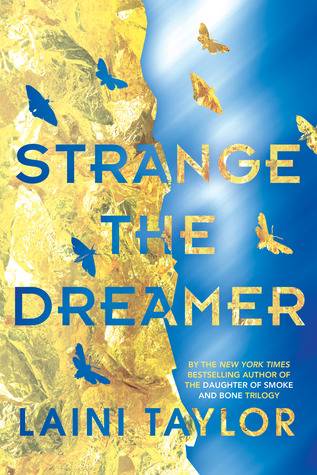 Her latest novel Strange the Dreamer is the story of Lazlo, an orphan who runs away to live in a library. His worldview (and his nose) are shaped by fairy tales.

Laini Taylor’s emotionally intense books always explore the inner lives of characters. In her latest, she gets that being a librarian was more than just loving books. It’s about discovering, preserving, and sharing knowledge and stories.

I got the chance to talk to Laini Taylor about Strange the Dreamer, Lazlo the librarian, dreams, fantasy, fairy tales, and how to sustain hope.

Molly Wetta for Book Riot: Let’s talk about Lazlo. I was delighted to meet him! How did his character come about?

Laini Taylor: He took me by surprise. I wanted to introduce Sarai through the eyes of a stranger, and needed a character who could experience Weep as an outsider. He needed to be a misfit in some way. He started as a scholar who lived in a crypt. It was haunted and there were scenes with Lazlo and ghosts before I worked out the mythology of ghosts in the book’s universe.

BR: I’m so glad he turned out to be a librarian.

LT: Writing him was a trial and error process. A scholar wasn’t exactly right for Lazlo’s character; he needed that craving for knowledge that scholars have, but scholars are more self-centered, inward creatures. A librarian was a better fit.

BR: I was particularly struck by the line “he wanted to know everything, and he wanted to help.” Those are the reasons I wanted to become a librarian. He definitely has the relentless curiosity that’s a prerequisite for the job.

LT: There’s something about a library. It’s a magical place.

BR: And you have a particular way with magic. As with your trilogy Daughter of Smoke and Bone trilogy, this story is populated with gods and monsters, yet the characters reveal so much about the human condition, and the issues that they struggled with are very present in the real world.

LT: Fantasy is an excellent way to look at real world issues. It lets the reader take them out of the realm of the familiar, look at them in a new way, whether its conquest, genocide, or race. You can divorce the issue from any preconceived notions.

BR: For young adults especially, I find fantasy as a great way to spark discussions—I’ve used Finnikin of the Rock by Melina Marchetta to discuss displaced peoples and refugees, The Winner’s Curse by Marie Rutkowski to discuss slavery and rebellion. It’s some ways easier to have these conversations about hypothetical fantasy situations.

LT: Fantasy doesn’t get it’s proper “props” in the book world. Some people don’t see how it can train you how to look at problems in a new light. This book was really a love letter to fantasy readers.

BR:  After all, it’s Lazlo’s fascination with fairy tales that give him his power, and I loved getting a peek at those stories within the book. There’s a tale Lazlo has read that explains the origins of gods and monsters: every 50 years, a mist descends on a village, and those who stay take the chance of turning into one or the other. If given the choice, would you stay, or go?

LT: Oh, I wouldn’t risk it — maybe when i was younger I would have. You’d have to be in such a desperate situation to take the chance, and couldn’t have much to lose. I imagined very few people actually take the risk.

In fact, I might want to write that story again. It’s fun to create a work of literature within a larger story.

BR: I vote YES. I love getting a chance to read those stories from within a book later. Like how The Girl Who Circumnavigated Fairyland in a Ship of Her Own Making was first mentioned in Cat Valente’s Palimpsest.

LT: Something I’m working on now is a story about a group of writers, and I’m getting to dream up the work that the characters create. It’s interesting.

BR: Can’t wait to read that! Now that we have a tiny bit of what you’re writing now, can you share what you’ve been reading lately? Any books you’re eager to recommend?

LT: I just read Wicked Like a Wildfire by Lana Popovic. I love books with exotic settings, it takes palces in Montenegro and is a story of modern day witches. It’s out this fall.

I also loved The Weight of Feathers by Anna-Marie McClemore. It’s set in California and is a magical realism tale of forbidden love.

BR: I’ll confess that I’ve having a difficult time reading fiction the way I used to in today’s political climate. I’m having trouble losing myself in a story, but I fell into Lazlo and Sarai’s world. In fact, it actually helped me start processing some of what I’m feeling. Sarai’s assertion that good people can hate, and they can kill, but they just call it justice, is incredibly poignant and relevant. Do you have any advice for people who feel they are losing hope in the face of hate and injustice?

LT: It all feels so overwhelming now. If you’re a democrat, the horror of seeing everything that was built over the previous years dismantled is disheartening. But there’s also hope. So many people are activists for the first time, awakening, people getting involved.

The truth is, people you love can have moral flaws.

Even a president who people loved so deeply has bombed other countries and done other terrible things.

It’s easy to ignore what doesn’t effect us. In all of my books I try to see the light at the end of the tunnel. Looking at history, we’ve made it out befor. It comes down to hope and people taking action.  That’s what my characters.  They put themselves forward and do what needs to be done in a nonviolent way. The characters aren’t warriors and that’s not how they are solving problems.

BR: Not only is this a story where the main characters are not warriors or fighters, it’s one where the true villains are long since dead. Was that a deliberate choice? Was it challenging to craft a story that is more about the aftermath and trauma than about an epic battle?

LT: It was a challenge and refreshing.I was  fatigued from reading a string of books that were all about villains. A villain must  be so evil now and inflict a level of excruciating horror. I didn’t want to have to do that. I was so over it.

Epic battle climaxes so easily go wrong. I’m interested in the emotional core of a story, not so much the fight. Just because it’s fantasy, doesn’t mean it has to have epic battles. My job is to make readers care about smaller things, create conflict in other ways.

So many of the characters have been so traumatized and brutalized, I didn’t want to have to tell about the horrible things in real time. Leaving the details to the imagination can even make them more effective.

BR: The unknown can be even more of a horror than something described in detail. But I did love the way the dream sequences explored the possibilities of imagination in a fun rather than a scary way. If Sarai were to visit your dreams, what adventures would you embark upon?

LT: Oh, those scenes were wish fulfillment, and mine would be much the same. I’d love to go to a tent in a magical marketplace, visit a wingsmith, and then out flying.

BR: If you want to experience these magical dreams for yourself, pick up Strange the Dreamer by Laini Taylor. Thanks, Laini, for taking the time to chat with me!

Sign up for What's Up In YA? to receive all things young adult literature.
Thank you for signing up! Keep an eye on your inbox.
By signing up you agree to our Terms of Service
#Young Adult Literature#interviews#laini taylor