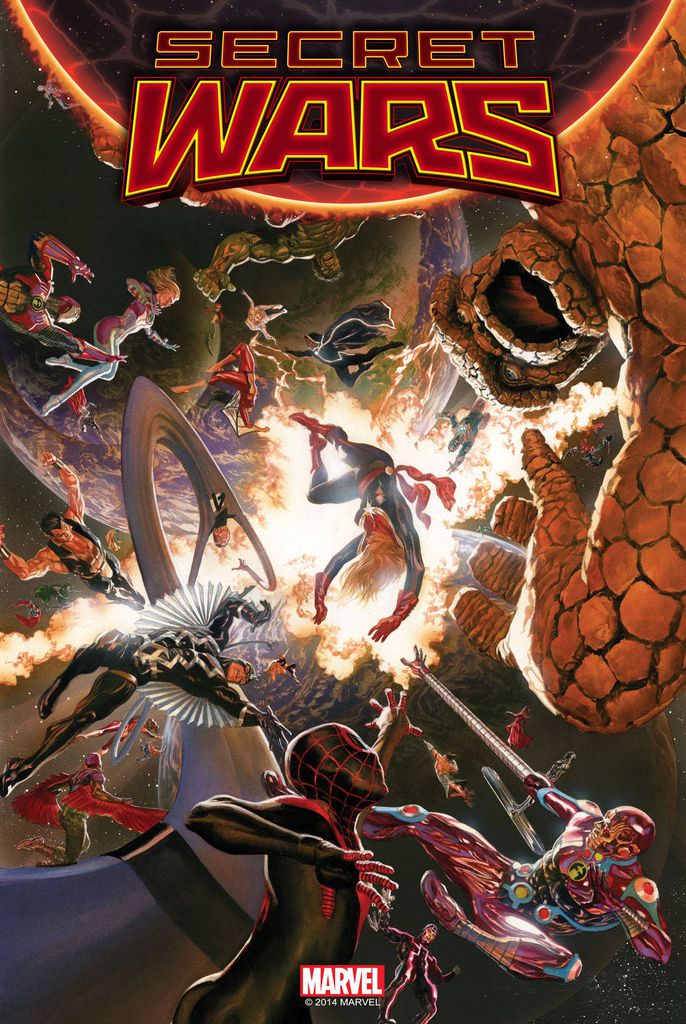 Well would you look at that? The Marvel Universe went and got itself wiped from existence as we know it. Typical! The next few months at the House of Ideas are going to be a jumble of world-shattering, world-shaping, event-laden madness as the fragments of the multiverse are reconstituted into something a little more streamlined (or maybe less! Who knows?),but in the meantime all this chaos is giving creators an opportunity to explore these characters in ways both new and old.

Sure, it all sounds a bit daunting (and we’ve got you covered, there), but it’s exciting, too. There are some promising titles coming out of Secret Wars, and with things just now ramping up, this is the perfect time to point you towards the books we’re looking forward to the most.

Between Darth Vader, Über, and The Wicked + The Divine, Kieron Gillen is absolutely electric right now. The common thread between all those books is a knack for taking an existing base (Star Wars, WWII, mythology) and warping it into something twisted yet earnest, righteous screeds on everything from adolescence to fandom and the horrors of war, all with a streak of plucky, punk rock spirit that can be alternatively life affirming or can call up pits of pure despair depending on the circumstances. His Marvel work, while also great, isn’t always allowed to get as extreme as his creator-owned titles due to the nature of continuity, but from what I can tell it looks like Secret Wars is giving him the opportunity to really cut loose and throw a bunch of doomed defenders into the Marvel version of Game of Thrones’ Night’s Watch and let the sparks fly as these disparate souls fend off legions of mechanical and undead horrors. Seeing such varied characters as Kang the Conqueror, Abigail Brand, and a Robin Hood-style Kate Bishop all bound towards a common goal sounds incredibly interesting, all the more because Gillen claims this is a bit of a swan song to the Marvel phase of his career. Siege looks like it’s going to bring the kind of imagination and insanity that marks these kinds of huge events at their best, and a big focus on guest artists (each providing one epic double-page spread an issue) should make it visually creative as well.

As a relatively new reader to comics, much of Secret Wars scares me as most of the tie-ins focus on past Marvel events. As much as I wish it weren’t the case, I’m can’t really enjoy a comic if it makes me aware that I know nothing. I do not like being Jon Snow. Runaways is one of a few Secret Wars titles that is not rooted in the past. Though it shares a moniker with a much beloved Marvel series (which I’ve read and know plenty about!), it’s, ultimately, a new story. It has new characters, new versions of classic characters, and Noelle Stevenson, a relatively new voice at Marvel. Stevenson’s work is notoriously witty, considerate, funny, and diverse. Sanford Greene’s style is edgy (good edgy, not ’90s edgy) and exciting. All with bonus Molly Hayes. There’s no doubting this series will be a “runaway” hit.

Category ID: 1074
Category ID: 13319
Category ID: 4284
Sitewide Events Newsletter
Subscribe to Events to receive news about sitewide bookish celebrations, round-ups, and more.
Thank you for signing up! Keep an eye on your inbox.
By signing up you agree to our terms of use

It’s no secret that I’m a big fan of Grant Morrison. His New X-Men run is one of my favorites and E is for Extinction is set to pick up where that series left off. Sort of. Artist-turned-writer (and Morrison collaborator) Chris Burnham will take us to a world where mutants are slowly becoming the dominant species, where mutant culture takes shape, and the rules aren’t the same. In this corner of Battleworld, Magneto leads a team of misfit X-Men, including Beak, Angel, and the Stepford Cuckoos, and the world isn’t quite the one we know. I’m also really looking forward to Ramon Villalobos’ take on these characters. His visceral, realistic characters match the feel of Frank Quitely while still bearing Villalobos’ distinct penicling. It’s a great pairing to take us back that first, devastating arc of New X-Men, where Genosha is decimated in seconds and mutants were changed forever. E is for Extinction has the right pedigree to be a worthy successor and I can’t wait to see how they play with their slice of Battleworld.

I’ve been going through some SERIOUS Thunderbolts withdrawal since the series was cancelled a few years ago. I’m not talking about the Rulk/Punisher/Elektra team, I’m talking about the OG team. The group of d-list villains who may or may not be seeking redemption. This book looks like it might fill that void. It features Moonstone (a classic Thunderbolts character) along with Winter Soldier, Magneto, Lady Deathstrike, Electro, and Jack O’Lantern on a quest to hunt down Red Skull. Further details on the series are sparse, unfortunately. I’m currently digging WIlliamson’s Birthright over at Image, so I’m eager to see what his does with this series.

I’ve actually never read the original Inferno, but I have major love for Illyana Rasputin, Teen Demon Queen. She’s a character that can shift majorly, depending on who’s writing her, but I have a lot of faith in Dennis Hopeless. His work on Spider-Woman gives us a Jessica Drew who is down-on-her luck but still capable, and X-Men: Season One is one of my favorite Marvel OGNs. Javier Garron is mostly new to me, but the preview pages are dynamic and uncluttered, and the characters are all expressive. I’m really hoping for this to be a character-focused book, and this is a team I think can provide that. Plus, demons. Demons are always fun.

Everything about this title has me busting out with excitement. Carol Danvers! Lady Pilots! Ladies in uniform! Carol Danvers in uniform! Wait, what was I talking about… Oh yeah, Secret Wars. Seriously, between the creative team, the female cast, one of my all time favorite heroes, and the sketches we got as a little preview – I couldn’t be more excited. Once you pile on how much I’m loving Jem and the Holograms from Thompson (the only member of the creative team I wasn’t super familiar with) it’s probably a miracle I don’t faint every time I think about it.

Okay, technically this is a Battleworld series and not strictly Secret Wars, but since Battleworld is a transition from Secret Wars, I’m counting it. I was already sold on this book when the cast was announced but the Free Comic Book Day issue really nailed it. I love the fact that Kamala get to be an Avenger. I love how diverse the team is. I love that I get to see more of Thor after that big reveal in Thor #8. I love that Kamala has two other teenagers on the team with her to get into shenanigans with — including MIles Morales! Everything about this book is right up my alley. The only thing that would make it better is if we learn that it’s Pepper in the Iron Man suit (that’s my guess and I’m sticking to it).