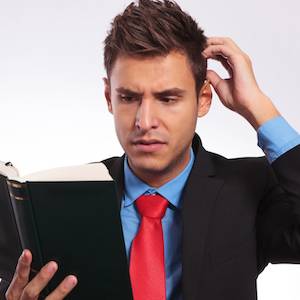 Many readers think “fun philosophy books” don’t exist. Sure, some are so technical they require a lot of background knowledge, and others are written so poorly that even sympathetic readers give up. But there are great philosophers who are also great writers. They write engagingly, they don’t confuse or bore the reader with impenetrable prose, and their words invite questions and even incite wonder. Here are a few of my favorites. 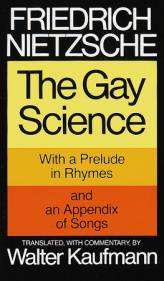 The Gay Science by Friedrich Nietzsche (Kaufmann or Nauckhoff translation)

You didn’t think I’d lead off with a nineteenth century German philosopher did you? But The Gay Science really is gay, in the sense of free-spirited and joyous. It’s got aphorisms, epigrams, songs, poems…and the controversial claim that “God is dead.” Read Nietzsche’s “most personal” work for his thoughts on morality, the will to truth, and the courage to really live a life:

What, if some day or night a demon were to steal after you into your loneliest loneliness and say to you: “This life as you now live it and have lived it, you will have to live once more and innumerable times more; and there will be nothing new in it, but every pain and every joy and every thought and sigh and everything unutterably small or great in your life will have to return to you, all in the same succession and sequence—even this spider and this moonlight between the trees, and even this moment and I myself. The eternal hourglass of existence is turned upside down again and again, and you with it, speck of dust!”

Would you not throw yourself down and gnash your teeth and curse the demon who spoke thus? Or have you once experienced a tremendous moment when you would have answered him: “You are a god and never have I heard anything more divine.” 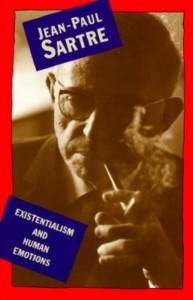 On to twentieth century France. Sartre’s summary and defense of existentialism, based on a lecture he gave in 1945. What does it mean to exist as a being who can actually think about my own existence? What does it mean to be “radically free”? Sartre asks the kind of questions anyone might have about life, and his answers are often surprising:

… man first of all exists, encounters himself, surges up in the world – and defines himself afterwards. If man as the existentialist sees him is not definable, it is because to begin with he is nothing. He will not be anything until later, and then he will be what he makes of himself. 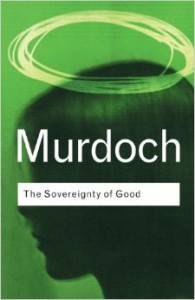 The Sovereignty of Good by Iris Murdoch

Like Sartre, Murdoch, an Ireland-born British philosopher, writes about freedom- but unlike the existentialists, she focuses on the imaginative attention we need to make truly free decisions. As she says, “I can only choose within the world I can see.” Today’s readers might not like her idea that there is such a thing as “the Good” which provides an objective morality, but so many of her observations in these three essays are fascinating even if you’re not committed to her big picture. Like this one:

…great art teaches us how real things can be looked at and loved without being seized and used, without being appropriated into the greedy organism of the self. The exercise of detachment is difficult and valuable whether the thing contemplated is a human being or the root of a tree or the vibration of a colour or a sound. Unsentimental contemplation of nature exhibits the same quality of detachment: selfish concerns vanish, nothing exists except the things which are seen. Beauty is that which attracts this particular sort of unselfish attention. 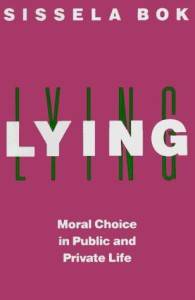 Here’s a modern paradox: we all condemn lies, yet we all lie. What is a lie, anyway? Why do we lie? And at what cost — or benefit —  to ourselves and others? These are Bok’s questions in this very insightful book of applied moral philosophy. She brings in other philosophers’ ideas and approaches from psychology and political science.

“The moral question of whether you are lying or not is not settled by establishing the truth of falsity of what you say. In order to settle this question we must know whether you intend your statement to mislead.”

The Ethics of Identity by Kwame Anthony Appiah

This is such a open, inviting book which yet vigorously defends some controversial ideas. If you’re interested in human dignity, in autonomy, in tolerance, in authenticity, in the value of making our own lives while acknowledging our rootedness in culture and identity, this is the book for you.

“When my father died, my sister and I found a hand-written draft of the final message he had meant to leave us. It began by reminding us of the history of our two families, his in Ghana and our mother’s in England, which he took to be a summary account of who we were. But then he wrote, ‘Remember that you are citizens of the world.’ He told us that wherever we chose to live — and as citizens of the world, we could surely choose to live anywhere that would have us — we should endeavor to leave that place ‘better than you found it.’ ‘Deep inside of me,’ he went on, ‘is a great love for mankind and an abiding desire to see mankind, under God, fulfill its highest destiny.’”

It’s no coincidence that three of authors of these fun philosophy books are novelists, a fourth is a memoirist, and a fifth was a composer and a scholar of poetry. They don’t confine themselves to philosophical prose but make use of whatever tools they need from a wide variety of sources.

In her response to a critic who called her book a mere “travelogue” (as opposed to “real philosophy”), Bok, quoting another writer, said that

Rainbows, rockets, slivers of mirror, and arrows are important for a good text. I mean by that connections between different times, places, consciousnesses, and aims that point both backwards and forwards.

I can accept some confusion and difficult passages in exchange for “rainbows, rockets, slivers of mirror and arrows.” In fact, I think that’s a pretty good deal.