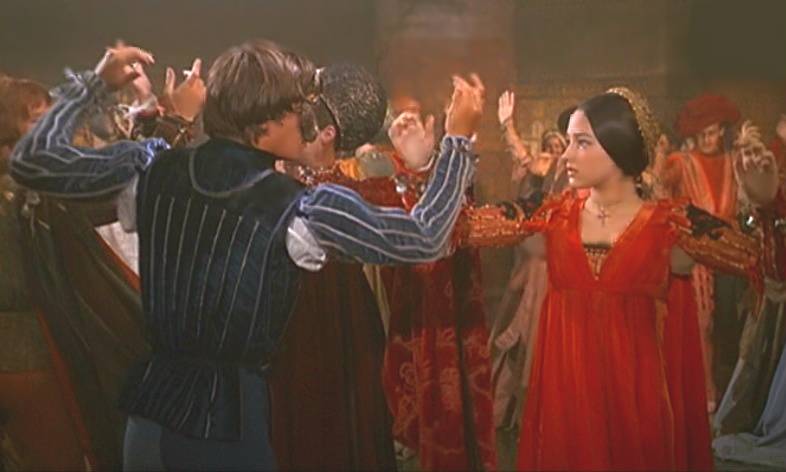 What if the writers of our most treasured stories had to crowd-fund their projects?  Let’s imagine what it would be like to Kickstart the Classics…

Romeo and Juliet: A Comedy
by Billy from Stratford

Lots of dancing and partying in this raucous romantic comedy.
(This is an artist’s conception because lady actors haven’t been invented yet.)

You know how silly young love is? The kinds of crazy, nutty promises young people in love make to one another? The life-or-death feelings the most minor of inconveniences can engender because you so long to be with your best beloved? My new script plays on all the dopiness of teenage romance.

First, there’s Romeo. He’s so fickle in love that when the play opens, he’s all head-over-heels in love with one girl, and by the end of the first act, he’s forgotten her name and is all over basically the next girl he sees! He’s an impossible character to take seriously and I’ve written him really broadly so the audience doesn’t mistake him for some kind of romantic hero.

Then there’s Juliet, the object of his affections (for now!). She’s silly and ditzy, just looking to grow up too fast, and she falls for his wiles and charms. She wants to rebel and he wants to be in love. The chemistry is great.

I haven’t quite finished the play yet but I’m thinking a big dance number or something? Anyway, that’s not really that important. I’ll just do something centering around this comic masterpiece of a character I’m rocking for this play: Mercutio. He’s flipping hysterical. You guys are going to love him.

Basically, if Taming of the Shrew tickled your funnybone, you won’t want to miss getting involved in Romeo and Juliet: A Comedy from the ground floor.

$5: A place to stand in the audience of the opening night when this baby hits the Globe.

$10: A place to stand in the audience and three to four pieces of lightly rotten fruit for your chucking pleasure.

$35: An actual seat in the Globe!  Rub shoulders with the moneyed and powerful of London’s entertainment-going set.

$45: The same as the $35 level, but with a poor person to stand near you and chase other poor people away. Don’t have your theatre-going experience ruined by coming into contact with vagrants and beggars — unless you want to meet the cast after the show!  Ha, just a little Elizabethan theatre humour for you.

$100: I’ll name a character in the play after you. Even if your name is something totally stupid, like Tybalt.

$500 (limited to one backer): You can write the ending of the play! Have them get together in just the way you imagine it, or, heck, turn the whole thing into a tragedy if you like — death for everyone!

I’m going to state right up front here that if they close the theatres because of plague or anything else yet again I will probably just take your money and run. I could go into blacksmithing or something maybe.

Some of your money may be spent on licentiousness or in support of my bastards.  Listen, I’m an artist and these are free-wheeling times. What are you going to do.

Ok, you can’t Kickstart Billy’s project, but here’s one theatrical project about modern love that you can throw your support behind: An Infinite Ache.