Lee & Low Books is a children’s book publisher that specializes in multicultural literature. Since 1991, they have been tracking statistics (via the Cooperative Children’s Book Center) on diversity–or lack thereof–in children’s literature. 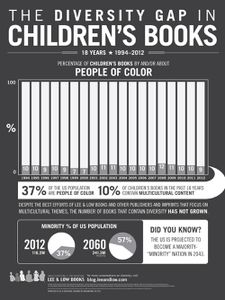 By examining the volume of children’s books by and about people of color and comparing it to Census data, they’ve found that while the minority population has risen dramatically, diversity in children’s literature has remained stagnant. The most current statistics show that 37% of the nation’s population consists of people of color while less than 10% of publications feature multicultural content.

This discussion is complicated, or in other words, the issues raised are not (ahem) black and white. In their blogpost, “Why Hasn’t the Number of Multicultural Books Increased In Eighteen Years?” Lee & Low surveys some of the leaders in the field about this diversity discrepancy.

The experts cover a wide range of topics including the challenges of marketing multicultural books and the role of gatekeepers (everyone from literary agents and publishers to parents and librarians) in facilitating reading choices.

Betsy Bird (of the School Library Journal’s A Fuse #8 Production), raised the first question, saying that “we need to officially address how we feel about white authors and illustrators writing books about people of other races. Is it never okay? Sometimes okay? Always okay?” Dr. Sarah Park Dehlen (St. Catherine University) described her concerns on this, saying that “Although not uniformly, I’m wary of non-Asian Americans who have written Asian American stories because I’ve read so many patronizing, Othering texts.”

I can sympathize with Dr. Dehlen because I have similar struggles. Personally, when I stumble upon a Vietnamese perspective written by someone who is not themselves Vietnamese, my gut reaction is to put the book down and run. And while there may be legitimate context behind this wariness, I know that my response is misguided.

The problem is that my skepticism is not in response to cultural insensitivity or misrepresentation, it is in anticipation or expectation of it. This does not give the author a fair chance and is itself a kind of prejudice. I agree that the industry could benefit from a more diverse array of authors, but that shouldn’t limit authors of any background from exploring diverse characters.

Because what is fiction if not the attempt to create and embody characters other than yourself?  If we only allow authors to write from their own perspective, we’ll have reduced fiction to nothing more than a desolate wasteland of thinly-veiled memoir.  And trust me, nobody wants that.

That being said, writers should know that when writing from another culture’s perspective, the margin for error is very slim. The stakes in play are cultural sensitivity and political correctness, but also the fundamentals of good writing. Creating flimsy or unrealistic (as in not fully-realized) characters not only reveals limited understanding of a culture, it indicates limitations in the author’s ability to write. 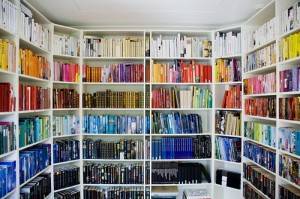 But if authors understand the challenge at hand and accept the responsibilities that come with it, then who are we to stop them? Creative writing is an exercise in empathy and if an author has the respect and breadth of imagination to conjure forth a rich character of another culture, I say go for it. And if they fall short, I trust readers to be there for a constructive discussion about why it didn’t work.

The flip side of this brings us to the second authorship question–about our expectations of authors of color and the stories they write. This is important because a common concern among writers of color is that they get pressured/cornered into writing a particular kind of book.  Poet/Author Nikki Grimes addresses this issue, saying that “I think authors of color who do not produce manuscripts that fit an expected demographic, who, for example, are writing books featuring characters who are middle class, instead of poor, or characters who live in two-parent households, instead of single-parent homes, are finding it difficult to place their manuscripts.”

This of course is problematic for the same reasons as I mentioned above. First of all, authors should not be confined to writing only about their own culture. But if they choose to do so, they should definitely not be forced to fit their stories and characters into a convenient mold. If the publishing industry only supports particular slivers of prescribed fiction, then we risk ending up with multicultural literature populated exclusively by cultural caricatures and lacking the richness and variety within demographic groups that makes up true diversity.

The diversity discussion is complex and full of nuance, but it is essential and is leading to more than just talk.  On June 14th, the non-profit organization First Book announced the Stories for All Project, a $3 million initiative to expand the market for diverse children’s literature. So there are concrete signs of a growing will to cultivate content that better represents the full variety of people and stories out there. And while path forward might not always be clear, at least it seems we’re headed in the right direction. Conversations like this will help make sure that we don’t veer off course.